2nd Epistle of Clement to the Corinthians (1922)
Society for Promoting Christian Knowledge - SPCK - Editorial Secretary did the translation
http://books.google.com/books?id=uo5NAAAAYAAJ&pg=PA22 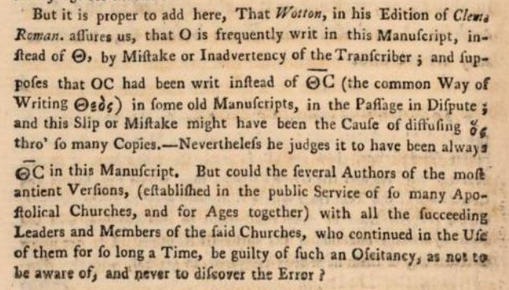 It's fairly common with the ancient manuscripts to have a reading with both the traverse of the Theta or the mark of contraction worn away/missed through inadvertence. I don't know why so many mainstream critics fail to acknowledge that. I think modern apparatuses have significantly impeded proper paleographical approaches. Seeing the manuscripts with their own eyes (best in person, next best digitally) is beneficial to determining any reading.

In codex C, for instance, either the mark of contraction or the traverse of the theta (when applicable) has vanished from every prior contracted word on the same folio containing 1 Timothy 3:16 (119r). The mark of contraction is absent from the θεοῦ of ἐκκλησία θεοῦ in v. 15, so that we read ϴY (and is not far from reading ΟΥ). And for the θεοῦ that immediately precedes it (θεοῦ ἀναστρέφεσθαι), we find not ϴ̅Y, but rather ΟΥ. Just centuries of wear and tear. The mark of contraction over “Christ” further back in v. 13 (ἐν πίστει τῇ ἐν Χριστῷ Ἰησοῦ), is wholly invisible, and that over Ἰησοῦ in the same passage is lost, so that only ΙΥ is visible. In Alexandrinus (A), not only has the theta of ϴ̅C almost completely vanished, so also have the thetas of ἐδικαιώθη and ἐπιστεύθη. Additionally, the traverse of the theta of ἀνελήφθη is nearly gone and so is the theta three lines down from ϴ̅C in v.16. The condition of the verse itself is quite bad: ἀγγέλοις is very close to fully worn away; ἐκηρύχθη is missing its first three letters; ἐπιστεύθη is in danger of being worn away and has almost completely lost the letters ευθ. Only Sinaiticus is plain and clear in this point.

Additionally, when we see how often ϴ is miswritten O in codices F and G, it's fairly certain the manuscript was copied past its time. The pronoun everywhere else in both is written OC. Only here it is written Ο̅C in both, and they both have the same ancestor. The many errors of spelling and word division indicate the scribes weren't very skilled in Greek. So they simply copied what they saw.
You must log in or register to reply here.
Share:
Facebook Twitter Reddit Pinterest Tumblr WhatsApp Email Share Link
Top