Here we will note a couple of comments about the mss as well.

... two new attestations (add it to the long list) for the "Long Ending of Mark" :
Palladius of Ratiara (4th century) and Romanos the Melodist (6th century)

PALLADIUS : he says that in the gospel of Mark it is written (so and so from the long ending)

Thanks ! (Karim al-Hanifi from Belgium and France)
Click to expand...

The scholar Roger Gryson is supposed to have found a quotation from the fourth-century Arian writer Palladius of Ratiaria in a little-known manuscript, Ms. Lat. Parisinus 8907. (published by F. Kaufmann in 1899.) The quotation is from somewhere in Mark 16:9-20 [Edit: Mark 16:19].
Our task: (1) test Gryson's claim that Palladius made this quotation, (2) ascertain what the quotation is, in Latin, and (3) translate the quotation from Palladius in English and (if possible) summarize the setting in which it was given.

Here is the mission: The scholar Roger Gryson is supposed to have found a quotation from the fourth-century Arian writer Palladius of Ratiaria in a little-known manuscript, Ms. Lat. Parisinus 8907....

Isaac the Syrian quotes the long ending of Mark in his "Ascetical Homilies", number 62. He quotes Mark 16.17 in full letters and Its a 7th century testimony ^^
https://www.facebook.com/groups/NTTextualCriticism/permalink/4379157745504525/

same century of a lot of Uncials, the 9th. Ibrahim at-Tabarani tells us in a debate with muslims, that christians can consume poison and have nothing....its a clear reference to the Long Ending of Mark in Arabic in the ninth century and earlier because the text spokes about an earlier debate.
Source : The Disputation of Ibrahim at-Tabarani
https://www.facebook.com/groups/NTTextualCriticism/permalink/4308569332563367/

"Gospel of Barnabas", ... from the 1 st century, in his chapter 222, the last one, jesus sent his disciples in the world (to evangelize), and it's a very powerfull allusion of Mark 16.20 - Karim al-Hanifi

"Zacharias Chrysopolitanus" (Zacharie le Chrysopolitain or Zacharie de Besançon in french), in the twelve century, has a work intitulate "In Unum Ex Quattuor" (one in four). He uses a copy of the Latin Diatessaron and...he has the Long Ending of Mark, in his book 1, and he quotes Mark 16.9 and 15.
Its another witness for Tatian's Diatessaron ! 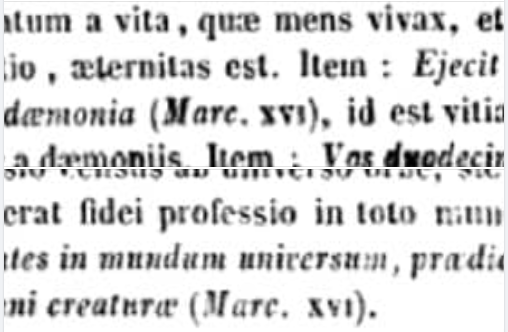 - Smaragdus of Saint-Mihiel (8-9th centuries), quotes Mark 16.16 in his "Collections of Comments on the Epistle and Gospel for each holy day in the year", on the gospel of Luke chapter 2.

- Rabanus Maurus (8-9th centuries), quotes Mark 16.19 in his "Commentary on Matthew", book 8. And in his "Homiliae de Festis Praecipuis", Homily 21 is a complete homily on the ending of Mark...the long one !

Buck Daniel
How are you finding all this, Karim?

If the long ending of Mark is not accepted in textual criticism as authentic (not automaticaly from Mark, but before the final edition, diffusion and transmission), none of the variant readings can be. BECAUSE if we take all the evidences, i am not aware of any of the important variant readings of the NT to have this support of witnesses.
We have seen that 99.5%, if not more, of all the manuscript traditions (versions, patristic, and so on) have the long ending of Mark.
We have seen that the manuscript of almost all the church fathers from 2nd century to the last one of them (fathers) have this long ending.
We have seen that the argument of the hapax of the long ending was definitly burried forever in 2020 by Karim al-Hanifi on academia
We have seen...
We have seen...
...
So in term of textual criticism, it is very hard to say that this long ending is not authentic (in terms of external evidences of the textual criticism. For internal, we can have a debate but for the external : case closed from my point of view.
Sorry i am a french speaker, so my english is not very good ^^ but i understand it very well.

SOME COMMENTS
Last edited: Tuesday at 8:18 AM

Many Christians call the Gospel of Barnabas a medieval fake, the islamists give it authority.