Compare to Priscillian.
Does it predate it, thus changing all the Priscillian scholarship?
Last edited: Sep 14, 2021

• [The Unadorned Trinity] There also survive two short confessions of faith from Isaac ("Fides Isatis" and "Confessio fidei
Catholicae"), a converted Jew who was involved in the disputes between Damasus and Urbinus in the mid-370s, only to
suffer exile to Spain where he may have reverted to his ancestral faith. (Ayres, Augustine and the Trinity, 2014, p. 99)

• [Turner] But by far the most important of Dom Morin's recent contributions to patristic studies is his article in the second
number for this year of the Revue d'Histoire et de Littérature Religieuses (Paris, 1899), entitled L'Ambrosiaster et le juif
converti Isaac, contemporain du pape Damase. Ambrosiaster, as is well known, is the name given, for purposes of
convenience, to the author of a commentary on St. Paul's Epistles which Augustine used as 'saint Hilary's,' which the
early middle ages attributed to St. Ambrose, and for which modern scholars have suggested one name after another. It is
certain that this writer was a contemporary of Pope Damasus (366-384): it is all but certain [PAGE 155] that he lived and
wrote at Rome, and that to him belongs also the Quaestiones Veteris et Novi Testamenti, printed in the appendix to the
first part of the third volume of the Benedictine Augustine. It is certain that he was not either a bishop or a deacon, for he
almost equalizes the office of bishop and priest, and he attacks the iactantia Romanorum Leuiiarum: Dom Morin shows
further that the arguments for his being a priest are less cogent than those which make him out a layman, and illustrates
lay interest in theology from the examples of Ambrosiaster's contemporaries, Tyconius and Marius Victorinus (he might
have added from the next half century Marius Mercator)'. He was also, and this Dom Morin is the first to point out,
unusually well informed in all that pertained to Judaism. He is acquainted with Jewish legends about the sepulchre of
Moses and the demons who served Solomon, and with Jewish apocrypha like the Apocalypse of Elias and the book of
Jannes and Jambres, from both of which he supposes St. Paul to borrow. He knows the customs of the synagogue, the
right of the seniores to be consulted, the appointment of masters to teach the children, the being seated at disputations —
whether on chairs, on benches, or on the ground, according to rank. Dom Morin then reminds us that history tells us of a
converted Jew, of the name of Isaac, who played a not unimportant part in the troubles at Rome which accompanied the
rival elections in 366 of Damasus and Ursinus. Isaac was a leader of the party of Ursinus, and carried on for many years a
campaign which all but culminated in the condemnation of Damasus in the civil courts. The Pope was saved by the
Emperor's intervention. Isaac was banished to Spain (c. 378 A. D.), and in chagrin at his ill success fell back into Judaism.
But if Isaac was the Ambrosiaster of the Commentary, it is easy to understand, what has hitherto been so unintelligible,
why Jerome nowhere alludes to his work even when commenting on the same epistles: the faithful henchman of
Damasus boycotted the apostate Jew. It only remains to add that Isaac is mentioned as a theological author by
Gennadius of Marseilles, and that a fragment on the Trinity and Incarnation preserved in a Paris MS of canons, under the
name Fides Isatis ex ludaeo, 'of Isaac the ex-Jew,' presents striking similarities of language with Ambrosiaster and the
Quaestioncs. On a review of these arguments it seems hardly premature to say that Dom Morin has solved one of the
great problems of patristic literature. [PAGE 156] Such, at any rate, is the opinion of Dr. Zahn as expressed in the
Theologisches Literaturblatt for July 7.

● [Exposition of our Universal Faith] We believe in the one God according to the scripture, are to be believed, do
not be like the Jews, or heretics, on its own, but in the mystery of the Trinity, that is, so that we would believe that
the Father is not the Son, and certainly we do believe that the Son is not the Father, and certainly the Holy Spirit
is neither the Father nor the Son, because the Father is ingenerate, the Son is certainly generated from the
Father without beginning, and the Holy Spirit proceeds from the Father and receives from the Son. As the
Evangelist testifies, that it is written, "there are three, that are witnessing in heaven, the Father, the Word,
and the Spirit, and these three are one in Christ Jesus." He did not say, "One in Christ Jesus" ["one"
masculine nominative singular] And in the Gospel it says, "Go ye, [...] baptizing the nations in the name of the
Father, the Son, and the Holy Spirit." And again, that the Lord himself said, "I and the Father are one" And in the
Psalms we read, "The Lord said to my Lord, Sit at my right hand." And in the Gospel of John this is said, "In the
beginning was the Word and the Word was with God and the Word was God." Saying, therefore, that the Word is
God, that is: the Son who is with the Father. By naming God twice he designated God the Father and Son as
persons.

The Epistles of St. John: The Greek Text (1905)
By Brooke Foss Westcott
https://books.google.com/books?id=JHEuAAAAYAAJ&pg=PA204

The interpolation occurs next in a group of writings which come from Africa in the last quarter of the fifth century :

Otto Bardenhewer - Patrology: The Lives and Works of the Fathers of the Church - (1908)
http://books.google.com/books?id=miJVuXgM1acC&pg=PA441 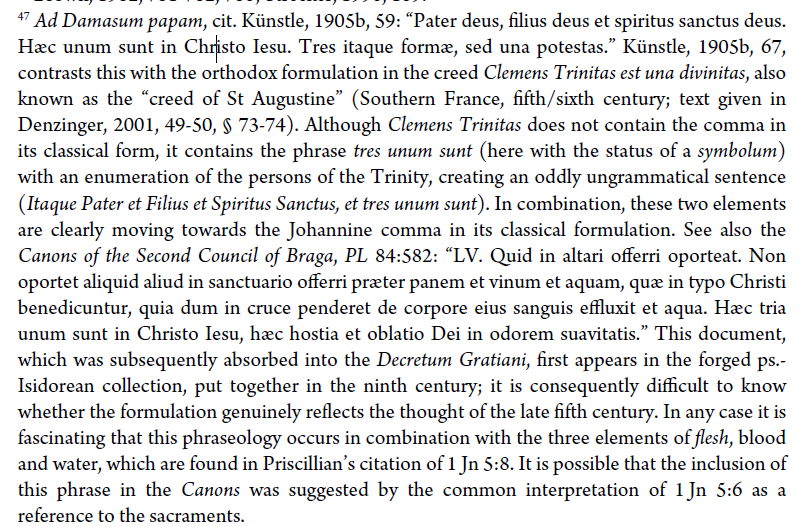 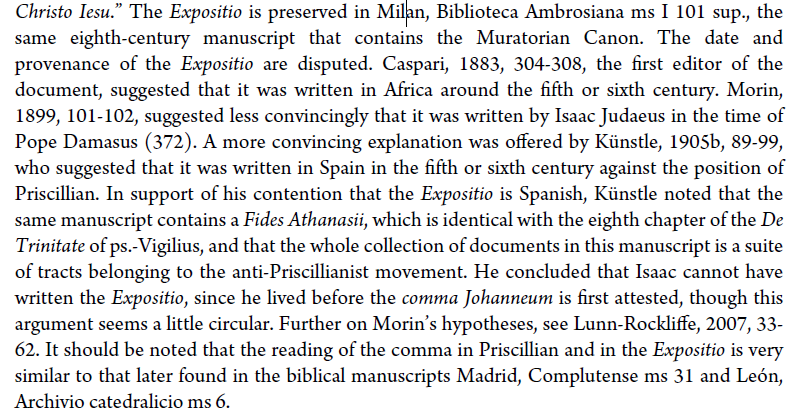 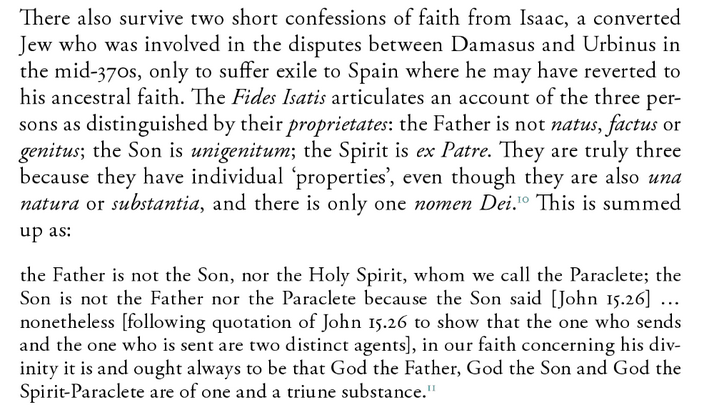 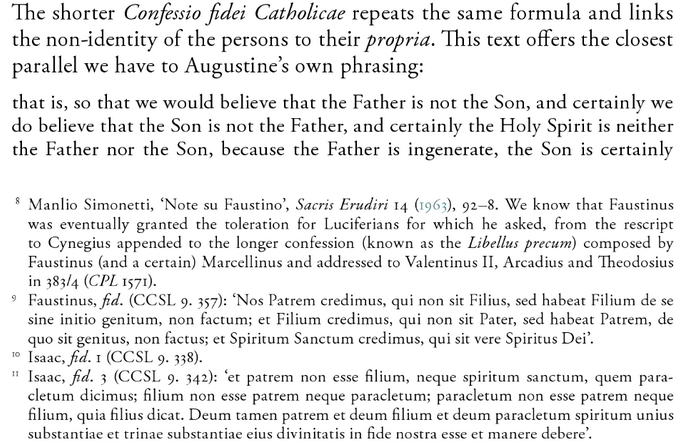 Greetings!
I have a question from Augustine and the Trinity p. 99-100

If the Ambrosian ms. is Isaac the Jew around AD 370-375 (Turner said this is certain as well in 1900) involving Damsus and Urbinus disputes, then we have a full heavenly witnesses, 1 John 5:7, citation likely before Priscillian's in Liber Apologeticus. In the Confessio fidei Catholicae.

That would modify a lot of textual scholarship, which tries to focus on Priscillian as the first one. (And his text is quirky!)

Does that make sense ?

Some notes to help figure out if this is a powerful 4th century evidence, before Priscillian, with a full Heavenly Witnesses.

Isaac the Jew (circa AD 366-378)
As the Evangelist testifies, that it is written, "there are three, that are witnessing in heaven, the Father, the Word,
and the Spirit, and these three are one in Christ Jesus."
Expositio Fidei Catholicae (CCSL 9:347, Lines 1-26)
Click to expand...

https://purebibleforum.com/index.php?threads/isaac-the-jew-ambrosian-ms-caspari.2147/
two short confessions of faith from Isaac ("Fides Isatis”and ”Confessio fidei Catholicae"), disputes between Damasus and Urbinus in the mid-370s (Ayres, Augustine and the Trinity, 2014, p. 99)
Augustine and the Trinity
https://books.google.com/books?id=LpyG7YnkqokC&pg=PA99

RGA p. 37-38
The second is the Expositio fidei chatolice, an orthodox creed written probably in Spain in the fifth or sixth century, in which this symbolum occurs as part of the wording of the Johannine comma.48

48 Expositio fidei chatolice, in Caspari, 1883, XIV, 305: “[…] pater est ingenitus, filius uero sine initio genitus a patre est, spiritus autem sanctus processet [procedit Caspari] a patre et accipit de filio sicut euangelista testatur, quia scriptum est: Tres sunt qui dicunt testimonium in cælo:
pater, uerbum et spiritus, et hæc tria unum sunt in Christo Iesu. Non tamen dixit: unus est in Christo Iesu.” The Expositio is preserved in Milan, Biblioteca Ambrosiana ms I 101 sup., the same eighth-century manuscript that contains the Muratorian Canon. The date and provenance of the Expositio are disputed. Caspari, 1883, 304-308, the first editor of the document, suggested that it was written in Africa around the fifth or sixth century. Morin, 1899, 101-102, suggested less convincingly that it was written by Isaac Judaeus in the time of Pope Damasus (372). A more convincing explanation was offered by Künstle, 1905b, 89-99, who suggested that it was written in Spain in the fifth or sixth century against the position of Priscillian. In support of his contention that the Expositio is Spanish, Künstle noted that the same manuscript contains a Fides Athanasii, which is identical with the eighth chapter of the De Trinitate of ps.-Vigilius, and that the whole collection of documents in this manuscript is a suite of tracts belonging to the anti-Priscillianist movement. He concluded that Isaac cannot have written the Expositio, since he lived before the comma Johanneum is first attested, though this argument seems a little circular. Further on Morin’s hypotheses, see Lunn-Rockliffe, 2007, 33-Lunn-Rockliffe, Sophie. Ambrosiaster’s Political Theology. Oxford: OUP, 2007.

Grantley -
Sure, but you still haven't dealt with Künstle's objections to Morin

Confessio fidei Catholicae - The Ambrosian ms. that has the Muratonian Canon. Lewis Ayres in Augustine and the Trinity (2014) p. 99-100 says this is connected to Damasus and Urbinus. Cuthbert Hamilton Turner showed this similarly in 1900, "the rival elections in 366 of Damasus and Ursinus. ... Dom Morin has solved one of the great problems of patristic literature." And Theodor Zahn agreed.

The textual writers seem to be stuck on the idea of Priscillian as the first full heavenly witnesses evidence. Since his quote is quirky, and he was executed for sorcery or magic, this allows a type of hand-waving dismissal.

The Ambrosian ms., with the Muratonian canon, has a work Confessio fidei Catholicae, where the author is likely Isaac the Jew, writing around 370, connected with the AD 366 election dispute between Damasus and Urbanus.

[Exposition of our Universal Faith]
As the Evangelist testifies, that it is written, "there are three, that are witnessing in heaven, the Father, the Word, and the Spirit, and these three are one in Christ Jesus."

This identification was explained by Dom Germain Morin, and affirmed by Cuthbert Hamilton Turner and Theodor Zahn, and a superb Review by Andrew Eubank Burn.

Lewis Ayres of Durham affirms this authorship in: