Jan Krans on Erasmus and Vaticanus

No discussion of whether Erasmus knew of, or saw, the ms. when in Rome c. 1508.
When he lived with Bombace and Aldus!

Overall, the idea from Krans that Erasmus did not know of Vaticanus is very dubious.

"heated if infelicitous discussion on the so-called “Comma Johanneum."

The Comma Johanneum is an interpolation in 1 John 5:7, probably a third-century homilet-ical expansion on the “three witnesses” mentioned in the text. It entered the transmission of the Latin Vulgate relatively early, but remained absent from the Greek manuscripts until very late. Erasmus included the Comma in his third edition of 1522, mainly in order to thwart accusations of heresy. See Henk Jan de Jonge, “Erasmus and the Comma Johanneum,” ETL 56 (1980): 381–89.

the dissemination of information about and of the vastly changing opinions on Codex Vaticanus from Erasmus’ time until today is one of the desiderata of New Testament textual scholarship.

The agreement of Codex Vaticanus with the Vulgate is presented as a hall-mark of its quality.

Krans hides the fact that Vaticanus and the Vulgate have huge differences.

Since in general he did not trust the Vatican manuscript, he used the information only sparingly, and invariably with critical distance. 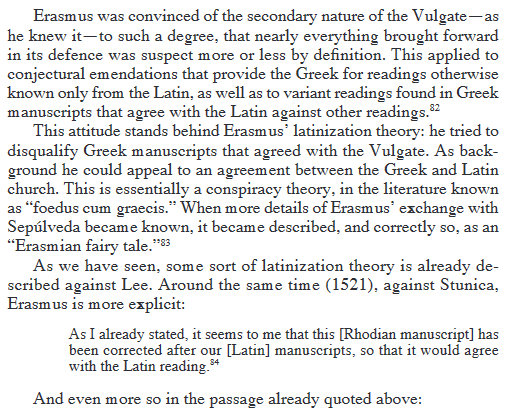 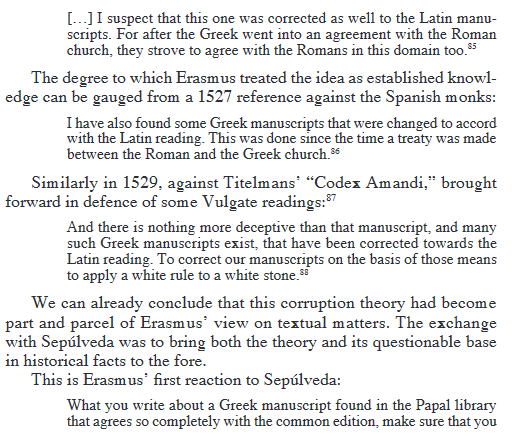 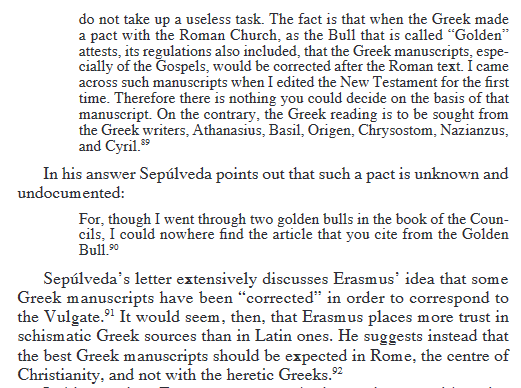 Erasmus switches to a Complutensian Polyglot defence, then returns:


On the “Bulla aurea." he discloses his source of information, namely Cuthbert Tunstall,97 and more or less withdraws the idea of a systematic and organised correction of Greek manuscripts. Nevertheless, he remains hesitant to accept Greek manuscripts that closely agree with the Vulgate:

I have not seen the Golden Bull myself. Cuthbert, bishop of Durham, a very learned man, told me about it, and I trusted him. He did not say that the correction of the manuscripts occurred in the bull, but yet maintained that the altering of the Greek manuscript had been done. I myself saw a manuscript of the gospels from Reuchlin:s library that completely agreed with our Latin edition; it was more recent, however.98

It can even be assumed that he did not realise that the readings sent to him on various occasions, as we have seen, were drawn from one and the same manuscript. In short, the temptation should be resisted to anachronistically project into his days the notoriety the manuscript would much
later acquire as the “Vatican manuscript" par excellence and tout court.

Notoriety is the wrong word for those who fawn over Vaticanus.

Steven Avery
While I have not yet gotten to this talk, notice this relating to Erasmus and Aldus Manutius:
Pure Bible Forum
Erasmus Access to Vaticanus - More than Sepulveda and Bombasius?
https://www.purebibleforum.com/inde...IsIKhcYUEJd_edGNAQ312uA0PzMTYvlUPfw#post-6148

Apparently Erasmus knew about Vaticanus in Rome, possibly personal inspection, and not just the reports from Paulus Bombasius (1476-1527) and Sepulveda (1489–1573).

Jan Krans "conjectures" that Erasmus did not know of the ancient ms. in the Vatican library

Wesley Huff
And from the bits an pieces of correspondence Jan Krans put together for his paper Erasmus was unaware of Vaticanus prior to publication in 1516.

Heflin Jones
On Krans's reading of the evidence, Erasmus was unaware of Vaticanus until after the publication of the first edition in 1516. Erasmus never visited Rome after that time, his last visit being in 1508-09 or thereabouts.

On my read I saw nothing in the Jan Krans article that supports this claim.

Nick Sayers
Hefin Jones It seems strange that Eramsus would live over a year with Bombace and 8 months with Aldus, but not visit the library of Rome, nor see Vaticanus.

Jan Krans-Plaisier
And the idea that Erasmus got acquainted with Codex Vaticanus in 1509 during his stay in Rome is pure speculation. There are simply no traces in the sources, and it also projects upon Codex Vaticanus a renown that it did not have at that time. The only thing we can say is that the friendship with Bombace was established, and that he had seen libraries in Rome (see Ep. 253). That was enough for Erasmus’ later request. The rest is in my article. In short: for such bold claims one needs evidence, in the absence of which nobody should heed them.
Click to expand...

SA
Krans is back-pedaling, I think he realized he made a bad error in his paper in not discussing the fact that Erasmus had been in Rome with solid scholars, and even lived with Bombace! However, it is unlikely he would admit the error, since his paper is built on his negative speculation. Note that he slipped in the later post above an acknowledgement that Erasmus had seen libraries in Rome!

His paper was the one that had speculation, a very weak "conjecture .. probably... " with an unlikely scenario.

Jan Krans
"We can only conjecture on the precise form Erasmus’ request to Bombace may have had. He probably did not know about the existence of such a specific, important, ancient manuscript in the Vatican library, and therefore simply asked his friend to look for any he could find."
Click to expand...

In fact, in trying to support his speculation, Krans gives an indication that Erasmus was aware of the special ms.

Erasmus, 1520
What if the same reading [i.e. the text without the Comma] were found in a manuscript in the papal library? Will Lee thunder against a manuscript of the pope?13

And it surely sounds like Erasmus has an inside sense of Vaticanus. He is hinting about a Vaticanus library, Pope ms. even before he wrote to Bombasius. The stronger argument has Erasmus aware of this pseudo-special ms. and Jan Krans doing the dancing speculation.
Last edited: Jun 12, 2021

20
Evidence suggests Sepulveda introduced these ‘umlauts’. In 1533 he wrote Erasmus:

Sepulveda's statement that he found 365 agreements with the Vg does not limit the number of notations he might have made.

Sepulveda must have shared this list of readings with Erasmus for in 1535 Erasmus remarks on the reading καδα at Acts 27.16 found in a ‘Vatican’ MS (attested only in Vaticanus and Sinaiticuscorr), Erasmus' Annotations on the New Testament: Acts – Romans – I and II Corinthians. Facsimile of the Final Latin Text with All Earlier Variants (ed. A. Reeve and M. A. Screech; SHCT 42; Leiden: Brill, 1990) 331. Since Codex Vaticanus has one of these marginal notations at that verse, it seems likely that the ‘umlauts’ originated with Sepulveda.