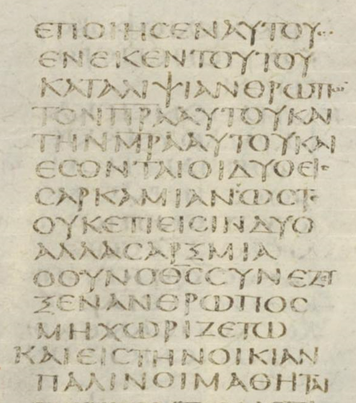 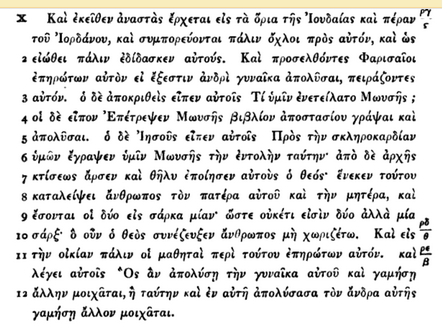 Says the ORIGINAL HAND of 892

A similar, possibly even more compelling, example is provided
by a phrase omitted in both codices from Mark 10, 7. Jesus is here
given to reply to testing questions from Pharisees on the question of
divorce. This is how the text appears in Sinaiticus, with the missing
lines of text in brackets:

‘ a man will leave his father and mother and (he will be joined
to his wife. And) the two will be one flesh. For this reason ... ’

Without the omitted passage, the text makes no sense. It lacks the
necessary reference to the joining of a man to his wife to explain the
reference to two becoming one flesh. The omission occurs in Codex
Sinaiticus and it is repeated in Codex Vaticanus. The uncorrected
omission is given below the text in brackets: 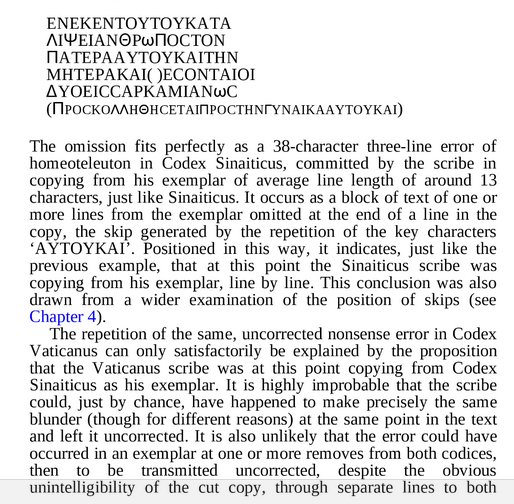 codices. Such a proposition would, of course, presume another
remarkable coincidence: that the source, which had the correct and
full version, just happened to be written to an average 13 characters
per line and happened at this point to reproduce the exact format of
the text in Codex Sinaiticus.

It could be argued that the error was originally a two-line, 19
characters per line skip or even a one-line 38-character skip from a
single column papyrus. But this then presumes that, when Sinaiticus
was written, the text prior to the omission happened by chance to
have gone up to the end of a line, in just the right position for an
error of homeoteleuton. It also leaves unresolved the problem of
how the obvious error remained over time in two separate lines of
transmission, when it could have been resolved either by intelligent
amendment or by reference to other sources that had the text in full.
It is furthermore not a line of argument that can be applied to the
skipped text, amounting to 13 characters, missing from both codices
at Matthew 15, 6 in the previous example. As a skip, this can only
have been a single line.
Last edited: Dec 9, 2022

Mark 10:29 (AV)
And Jesus answered and said,
Verily I say unto you,
There is no man that hath left house,
or brethren,
or sisters,
or father,
or mother,
or wife,
or children,
or lands,
for my sake, and the gospel's,

Compare Vaticanus and others:
https://www.purebibleforum.com/inde...cus-vaticanus-and-other-ancient-uncials.2911/

Mark 10:29 - Looks like a type of conflation involving Psi again! 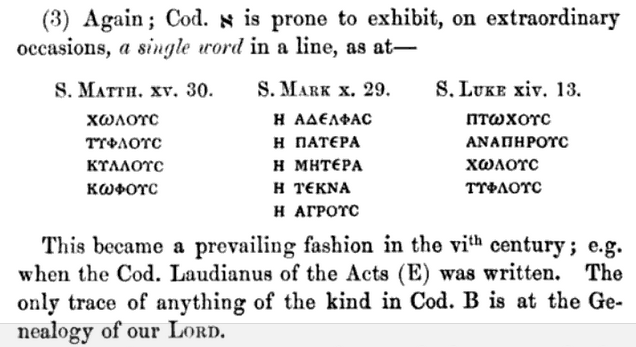 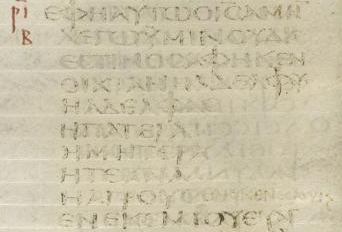 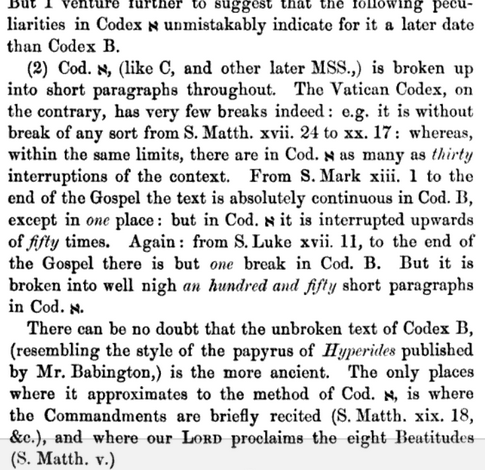 Combine with others in nomina sacra Sinaiticus master page

to be crucified, Israel Jerusalem

(2) Cod. א, (like C, and other later MSS.,) is broken up into short paragraphs throughout. The Vatican Codex, on the contrary, has very few breaks indeed: e.g. it is without break of any sort from S. Matth. xvii. 24 to xx. 17: whereas, within the same limits, there are in Cod. א as many as thirty interruptions of the context. From S. Mark xiii. 1 to the end of the Gospel the text is absolutely continuous in Cod. B, except in one place: but in Cod. א it is interrupted upwards of fifty times. Again: from S. Luke xvii. 11, to the end of the Gospel there is but one break in Cod. B. But it is broken into well nigh an hundred and fifty short paragraphs in Cod. א.

There can be no doubt that the unbroken text of Codex B, (resembling the style of the papyrus of Hyperides published by Mr. Babington,) is the more ancient. The only places where it approximates to the method of Cod. א, is where the Commandments are briefly recited (S. Matth. xix. 18, &c.), and where our Lord proclaims the eight Beatitudes (S. Matth. v.)

(5) Further; Cod. א abounds in such contractions as

But Cod. B, though familiar with ῑc̄, and a few other of the most ordinary abbreviations, knows nothing of these compendia: which certainly cannot have existed in the earliest copies of all. Once more, it seems reasonable to suppose that their constant occurrence in Cod א indicates for that Codex a date subsequent to Cod. B. 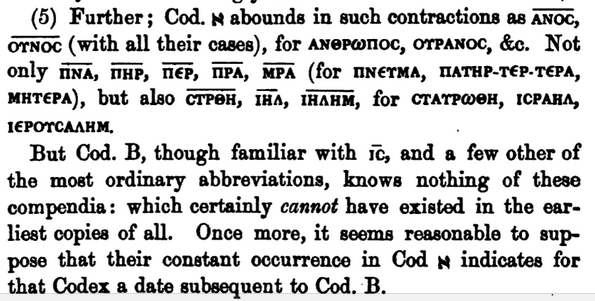 Journal of the American Oriental Society, Volume 10 (1880)
ON THE COMPARATIVE ANTIQUITY
OF THE SINAITIC AND VATICAN MANUSCRIPTS
OF THE GREEK BIBLE.
By EZRA ABBOT
https://books.google.com/books?id=6rlBAAAAYAAJ&pg=PA195 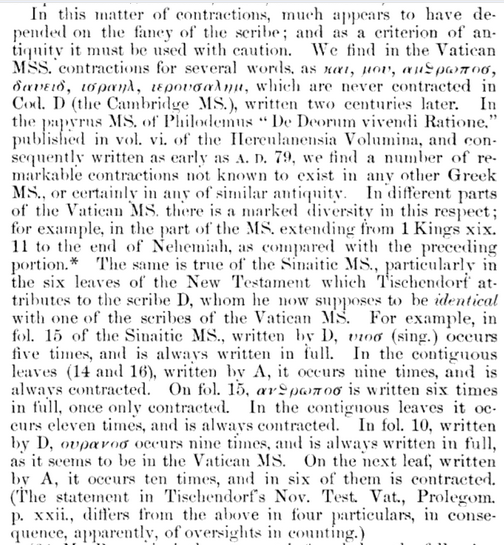 John 13:24
Simon Peter therefore beckoned to him,
that he should ask who it should be of whom he spake.

Sinaiticus has a wacky conflation, however the component parts are early.

On the other hand, Milne and Skeat (Scribes and Correctors of the Codex Sinaiticus, 45-46) cite a few places in Isaiah (Isa 28:22, 29:7 [they have ‘xxiv. 7*], and 29:11) where א‎ seems to have conflated readings in a manner similar to those cited above from the New Testament. Indeed, they refer (46 n. 1) to Scrivener's discussion of such readings, but without discussing the possible role of dictation. Another example of a conflation in א‎ is John 13:24, as noted by Metzger, Textual Commentary 1st ed., 241 (not in 2d ed.).

OTHER: "Peter nodded to him to inquire who it might be about whom he was speaking and said* to him, 'Tell [us] who it is about whom he is speaking'"
EVIDENCE: S

COMMENTS: The evidence listed above in braces omits "who it might be." The text reading uses the optative mood, which is a more difficult grammatical construction than that found in the notes. Although the optative is found nowhere else in John and this might be considered proof that this reading was added by copyists, it is more likely that several Alexandrian copyists and Latin translators changed this to a simpler construction. The text reading is found in early manuscripts of several kinds of ancient text. Manuscript S has included both readings. The original reading of manuscript p66 is illegible. 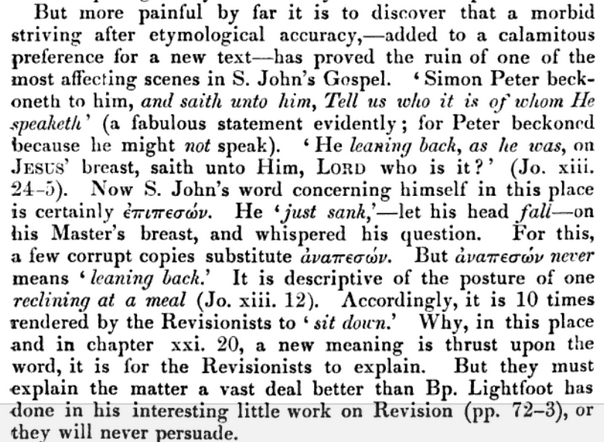 Milne and Skeat corrected by Royse

Isaiah 28:22 (AV)
Now therefore be ye not mockers, lest your bands be made strong: for I have heard from the Lord GOD of hosts a consumption, even determined upon the whole earth.

Journal of the American Oriental Society