the birth and early life of Constantine Simonides

On this thread we plan to gather the traditional information, new info from the Simonides 2014 conference in Vienna, and whatever we can find from, Harris A. Kalligas.

Forgeries, Literary. At the close of the year 1890 there died in an Albanian village a most remarkable character. His name was Alcibiades Simonides. He was a native of the island of Syrene, opposite Caria, where he was born in 1818. He had many accomplishments. He was eminent as a chemist, an artist, and a lithographer. His learning was profound; he was a fluent and persuasive speaker; he was gifted with extraordinary industry. Being fortunate enough to lack a conscience, he utilized all these talents by becoming a forger of ancient documents. His first public appearance was in Athens at the age of thirty-five, when he laid before the King of Greece a number of apparently priceless manuscripts. Many were works whose total disappearance has long been mourned by scholars. He gave a plausible explanation of how these documents had come into his possession. His uncle and himself had discovered them in the cloister Chilandari on Mount Athos. He was confronted with some of the most learned scholars in Athens, and satisfied them of the genuineness of his discoveries. The king ended by buying the most interesting of the lot for ten thousand dollars.
Click to expand...

Walsh has his first public appearance in the 1850s, however there are various involvements and publications in the 1840s.

Here you can see John Elliot Hodgkin discussing the normal question of whether he was born in 1820 or 1824.

Canfora and Kalligas on Simonides - Judith Weingarten and the Artemidorus Papyrus

A very interesting back and forth with Haris Kalligas (Charis Calliga, Χάρις Καλλιγά.) and Luciano Canfora and the blog of Judith Weingarten.

Calligra says (according to some "new material" that's come to light) he had to leave the island of Symi because of trying to poison his parents.

The information from Haris Kalligas is not always received as accurate, you pointed out Luciana Canfora earlier. Note though that she adds "apparently" to the poison account. I do not think she was at the 2014 conference on Simonides.

Anyone else notice Avery has had zero to say about the fact Maximw existed before Christ was even born? What reference are you describing? Was Hermas talking to someone from 2 centuries earlier?
forums.carm.org

His judgment got an unexpected boost with a letter published in the TLS on 14 March from a Greek architect, Ms. Haris Kalligas:

...as my family originates from the same island (Symi, near Rhodes) as Simonides, I had the fortune to come across some new material, including his father’s will, when I was writing a short article on his family house, of which some parts are still standing.... Simonides forged his own descendancy, claiming that his ancestors originated through a direct line of eighty-eight generations from Stageira, the city Aristotle came from, and gives lots of other false facts. Apparently, as a young man he tried to poison his parents, and this was the reason he had to leave the island around 1840. He also forged Symi’s past, having composed a totally imaginary history: “Symais, or History of the Apollonias School in Symi … ” (1849), claiming that the author was a certain monk called Meletios, from Chios.
Last edited: Jan 13, 2023 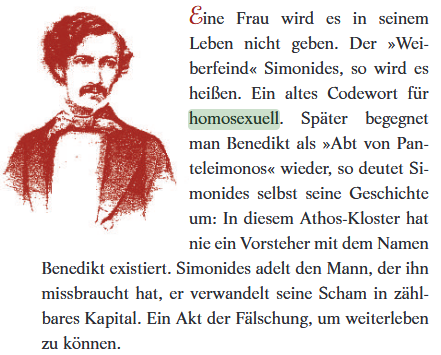 There will be no woman in his life. The "women's enemy" Simonides, so it will be called. An old code word for homosexual. Later, Benedict is encountered again as "Abbot of Panteleimonos," which is how Simonides himself reinterprets his story: In this Athos monastery, there was never a head named Benedict. Simonides ennobles the man who abused him, turning his shame into tangible capital. An act of forgery in order to be able to continue living. 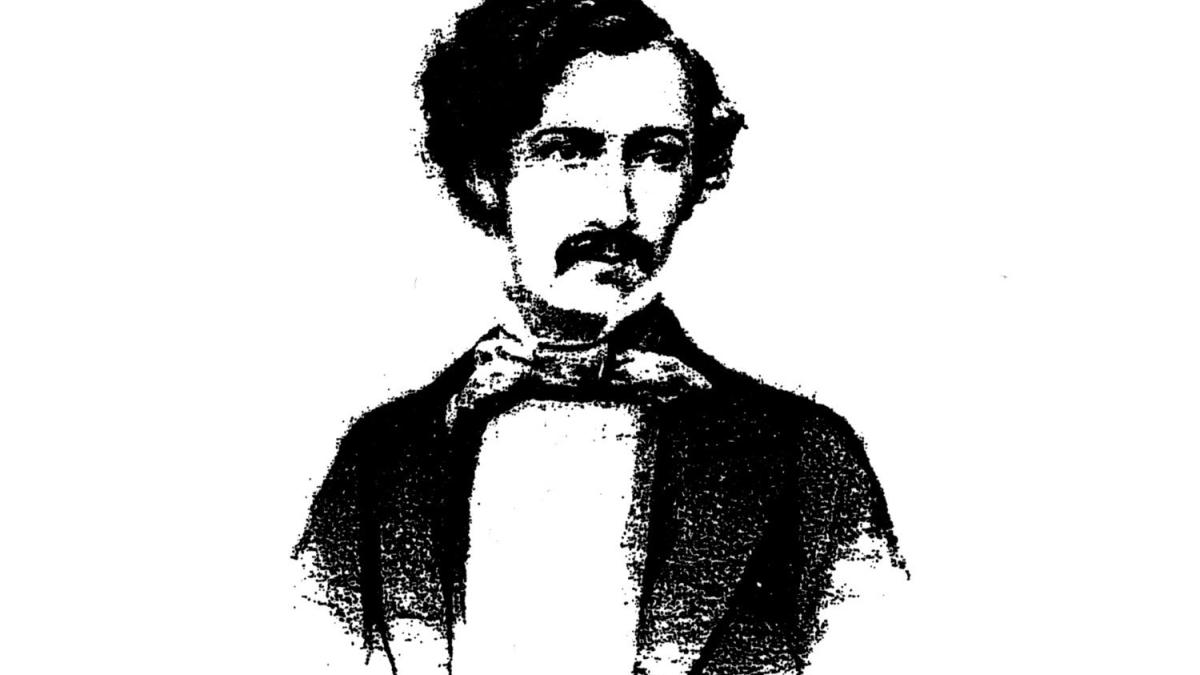 His father was close friends with a clergyman. "Uncle" Benedikt was almost part of the family, often stayed in the house - and abused the young Konstantin for years.


His biographer Schaper sees the false uncle as the one who made Konstantin Simonides what he was. Because he taught him the two crucial requirements: the love of old manuscripts and lying.

In the monastery he learned to forge​

At the age of 16, Konstantin had to follow Benedict to the monastery. It was intended as punishment for trying to poison his parents and uncle, perhaps as a remedy for the abuse. The monasteries on Mount Athos were a center of Greek orthodoxy, isolated from the world, with treasures of ancient manuscripts stored in their libraries, which Constantine gained access to through Benedict. The papyri from Mount Athos formed the basis of his later forgery.

He never married, perhaps the contemporaries who said he had homosexual tendencies were right. What is certain is that he devoted himself entirely to his manuscripts. He finally made his breakthrough in London. The British Museum accepted some of his manuscripts. Probably also because this time there were actually originals among them. His best customer became a private nobleman who collected books so excessively that he bought everything Simonides offered him.
You must log in or register to reply here.
Share:
Facebook Twitter Reddit Pinterest Tumblr WhatsApp Email Share Link
Top