the correspondence of Paul and Seneca 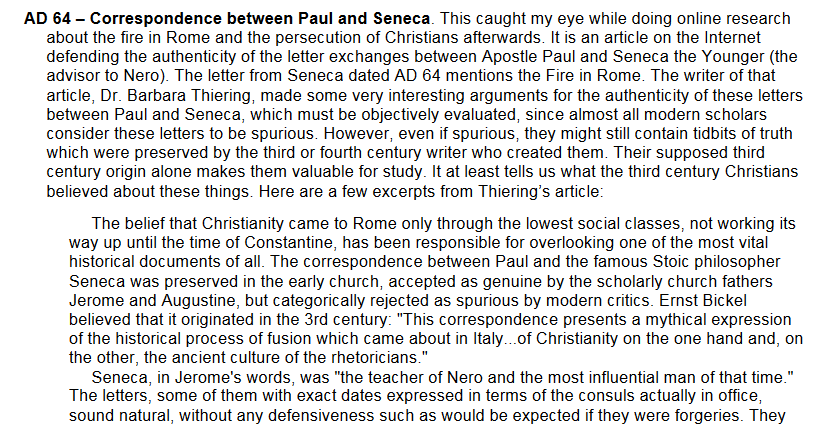 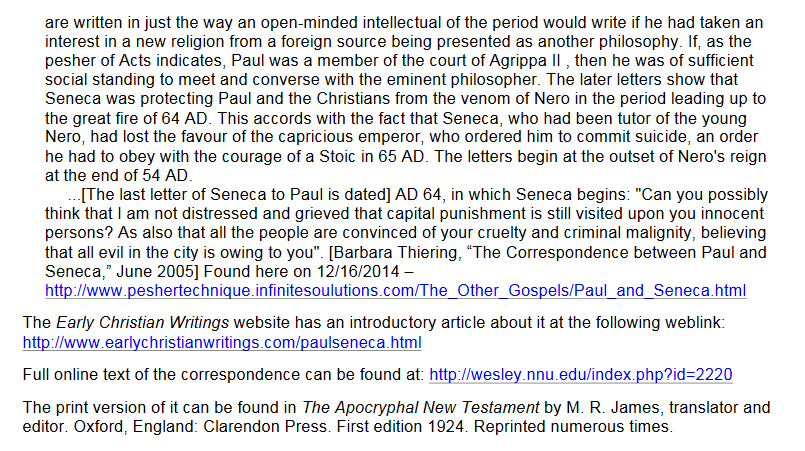 Hi Edward, greetings!
Nice paper, chronology etc.
I was wondering if anyone has gone through that Barbara Thiering material about the authenticity of the Paul and Seneca correspondence. I may have that yahoogroups stuff on my other puter.
And what is your thinking?
Thanks!
Steven Avery
Last edited: Jul 24, 2021

The late Christian tradition of an alleged correspondence between Paul and Seneca suggests the possibility that Seneca became acquainted with Paul, especially since Seneca's beloved brother, Gallic, did hear and acquit Paul in Corinth in A.D. 51 and since Paul himself claimed to have had Christian friends within "Caesar's household" (Phil. 4:22).
Click to expand...

Philippians 4:22 (AV)
All the saints salute you,
chiefly they that are of Caesar's household.

Acts 18:12-17 (AV)
And when Gallio was the deputy of Achaia, the Jews made insurrection with one accord against Paul, and brought him to the judgment seat, Saying, This fellow persuadeth men to worship God contrary to the law.
And when Paul was now about to open his mouth, Gallio said unto the Jews, If it were a matter of wrong or wicked lewdness, O ye Jews, reason would that I should bear with you: But if it be a question of words and names, and of your law, look ye to it; for I will be no judge of such matters. And he drave them from the judgment seat. Then all the Greeks took Sosthenes, the chief ruler of the synagogue, and beat him before the judgment seat. And Gallio cared for none of those things.

The proconsul of Achaia, Junius Lucius Gallic (brother of Seneca), ignored the charge leveled by the Jews in Corinth against Paul, of "persuading men to worship God contrary to the law" (Acts 18:12), declaring the matter to be merely "questions about words and names and your own [Jewish] law" (verse 15).
Last edited: Jul 24, 2021