... Jean-Pierre Paulin Martin. The fifth volume of Martin’s Introduction to the textual criticism of the New Testament, based on lectures given at the École supérieure de théologie at Paris in 1885–1886, contains a detailed account of many hundreds of variant manuscript readings of the comma which he had collected over three decades.

(this is pic in 2021 RGA thread, where the error about Martin being opposed to the Mark ending and Pericope Adulterae is corrected)

Martin’s summary of his conclusions, published in the Revue des sciences ecclésiastiques in 1887, set off a spasm of controversy, and a number of rebuttals were submitted to the Revue. The first came from Pierre Rambouillet, vicar at Saint-Philippe-du-Roule, an enemy of modernism, who argued that the Arians, ‘heretics as cunning as they were daring’, had corrupted the text of 1 Jn.98 The second was from Auguste-François Manoury, who defended the comma as authentic in his commentary on the Catholic Epistles (1888). Manoury challenged Martin’s position that the Greek manuscripts present the authentic text of the Scriptures, and that the failure of the Greek fathers to cite the comma in their polemics against the Arians suggested that it was not present in their bibles. A third refutation came from Jean-Michel-Alfred Vacant, a student of the decrees of Vatican I. The fourth came from Jules Didiot, who condemned Martin’s desire to downgrade to the rank of pseudepigrapha those passages present in the Vulgate but not in the Hebrew bible or the earliest Greek manuscripts of the New Testament – the Song of the Three Young Men and the story of Susanna in Daniel, the woman caught in adultery in John, the longer ending of Mark, or the Johannine comma – as a violation of the decree of the council of Trent. Martin’s error, Didiot suggested, arose from his failure to distinguish partes of the Scripture from particulae. What is worse, Didiot chafed, if the church cut itself loose from the Vulgate and had recourse only to the Hebrew text of the Old Testament, it might be compelled to cede to the rabbis in its exegesis.99 Martin defended his position in a series of replies, likewise published in the Revue.
Click to expand...

https://books.google.com/books?id=iHIuAAAAYAAJ&pg=PA549 - 1891
This pic can be expanded to more of the article.
And we can look for the article in La Science Catholique, it might be the same as Vacant above.

In RGA and not BCEME, not part of the debate above.

TO BE ADDED - MISSED BY GRANTLEY 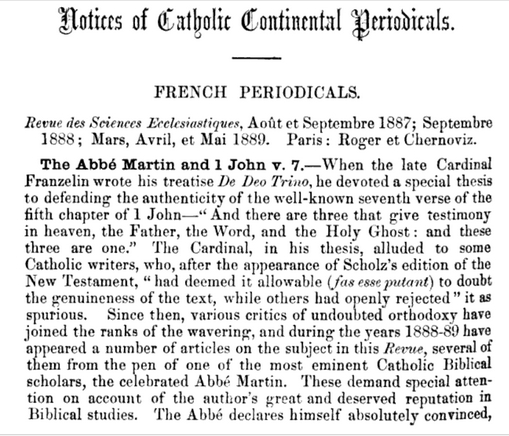