Anonymous Treatise on Re-Baptism (Ursinus)
"the teaching of the Apostle John, who says that "three bear witness, the Spirit and the water and the blood, and these three are one"

PBF
Arthur Cleveland Coxe on Tertullian, Cyprian and the Treatise on Rebaptism
https://www.purebibleforum.com/inde...n-cyprian-and-the-treatise-on-rebaptism.1348/

Commentary on the Bible, volume 6 of 6
Matthew Henry
https://www.puritannica.com/front/demo/wk/HenryMatthew/CommentaryVol6/1059-1098.html

So we are told that the author of the book De baptismo hæreticorum, allowed to be contemporary with Cyprian, cites John's words, agreeably to the Greek manuscripts and the ancient versions, thus: Ait enim Johannes de Domino nostro in epistolâ nos docens, Hic es qui venit per aquam et sanguinem, Jesus Christus, non in aquâ tantùm, sed in aquâ et sanguine; et Spiritus est qui testimonium perhibet, quia Spiritus est veritas; quia tres testimonium perhibent, Spiritus et aqua et sanguis, et isti tres in unum sunt—For John, in his epistle, says concerning our Lord, This is he, Jesus Christ, who came by water and blood, not in water only, but in water and blood;and it is the Spirit that bears witness, because the Spirit is truth; for there are three that bear witness, the Spirit, the water, and the blood, and these three agree in one. If all the Greek manuscripts and ancient versions say concerning the Spirit, the water, and the blood, that in unum sunt—they agree in one, then it was not of them that Cyprian spoke, whatever variety there might be in the copies in his time, when he said it is written, unum sunt—they are one. And therefore Cyprian's words seem still to be a firm testimony to 1 John 5:7, and an intimation likewise that a forger of the text would have scarcely so exactly hit upon the apostolical name for the second witness in heaven, the Word. Them, [3.] As only this apostle records the history of the water and blood flowing out of the Saviour's side, so it is he only, or he principally, who registers to us the Saviour's promise and prediction of the Holy spirit's coming to glorify him, and to testify of him, and to convince the world of its own unbelief and of his righteousness, as in his gospel, John 14:16-17,26; John 15:26; John 16:7-15. It is most suitable then to the diction and to the gospel of this apostle thus to mention the Holy Ghost as a witness for Jesus Christ.
Click to expand...

WITNESS OF GOD IS GREATER

• Quasten writes, "Firmilian, bishop of Caesarea in Cappadocia, was a contemporary of Gregory the Wonder-Worker,
whom he met as a member of Origen's circle and whose regard for the Alexandrian teacher he shared: 'He displayed
such esteem for Origen, that at one time he would summon him to his own parts for the benefit of the churches; at
another, journey himself to Judaea, and spend some time with him for his own progress in divine knowledge' (Euseb.,
Hist. eccl., 6,27). Both bishops attended the first two synods at Antioch that condemned the errors of Paul of Samosata.
Firmilian died shortly after the second in 268. He was one of the outstanding prelates of his time. Of his writing there is
extant only one letter, addressed to St. Cyprian of Carthage and dealing with the vexed question of the rebaptism of
heretics. It represents the answer to a lost letter of Cyprian's on the same subject and was for this reason preserved in a
Latin translation in the collection of the latter's epistles (Epist. 75). The original Greek is lost. The version shows all the
peculiarities of Cyprian's Latin and was therefore most probably made by him. It seems to have been written about the
year A.D. 256." (Quasten, Patrology, vol. 2, 1983, p. 128)

• The existence of a (relatively) complete New Testament in Africa first comes into clear view in the writings of Cyprian (f
258), who quotes a Latin Bible abundantly and accurately. The fact that on close study the translation used by him shows
secondary characteristics 1 confirms the conclusion that in Tertullian's time a Latin New Testament already existed in
Africa, and suggests that it is the result of a long period of translation commenced not later than 150. There was, however, in Cyprian's time no one official version. For instance, a Bishop Nemesianus of Tubunas (on the confines of Numidia and Mauritania), who was present at the Rebaptism Council of Carthage in A.d. 256 with Cyprian himself, uses a Latin translation which differs from that employed by him, and is probably earlier in origin.2 The texts used in Africa down to about the end of the fourth century (and in some cases even later) are substantially identical with Cyprian's, though some have been subjected to revision in varying degrees. (Souter, Text and Canon of the NT, 1913, p. 36).

Nor does his hypothesis explain why the author of De rebaptismate—someone close to Cyprian in space and time,
using a very similar biblical text—should also have cited 1 Jn 5:8 without the heavenly witnesses. - p. 27
Last edited: Oct 2, 2021 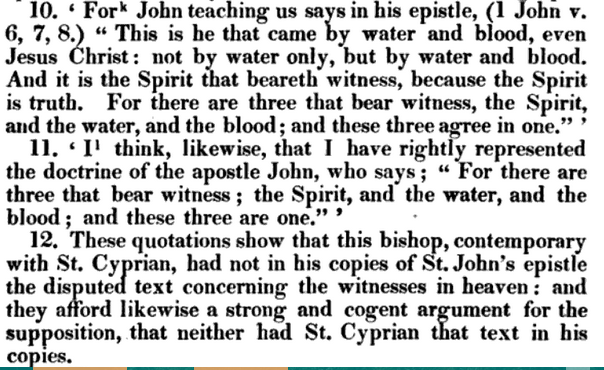 Weak argument, heavenly could be after earthly, and was not relevant to the baptism topic.