This article treats one such discarded snippet as the main event, not (only) as a variant for text-critical analysis but also within the text itself: neither authentic nor corrupt but useful for interpretation in many fields. Shunted to the footnotes of most English translations,8 Acts 8:37 garners minimal attention except, on occasion, from textual critics and those focused on baptism and liturgy.9 Bruce Metzgers authoritative textual commentary designates the verse a later addition,10 and this same conclusion is reflected in the Nestle-Aland 28th edition and the United Bible Society 5th edition, where the verse is included only in the apparatus. Commentaries likewise give the verse little consideration beyond noting its probable later addition, with only a handful of exceptions.11 The treatment of Acts 8:37 as later and hence spurious spreads from editions and commentaries to affect every interpretation of the entire story of Philip and the traveler on the road to Gaza.12 Nearly all treatments of the passage outside of textual criticism and commentaries ignore the verse, while the few that include it do so with the briefest of mentions.
Click to expand... 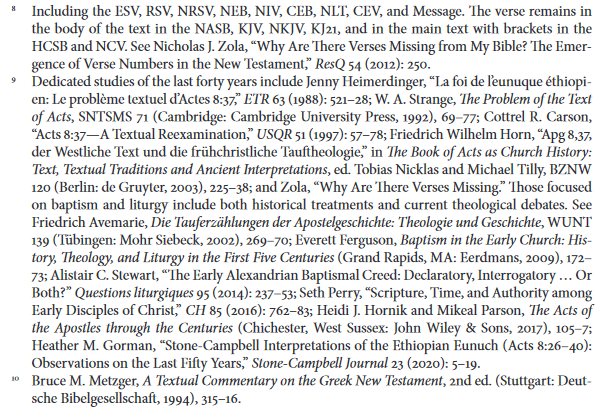 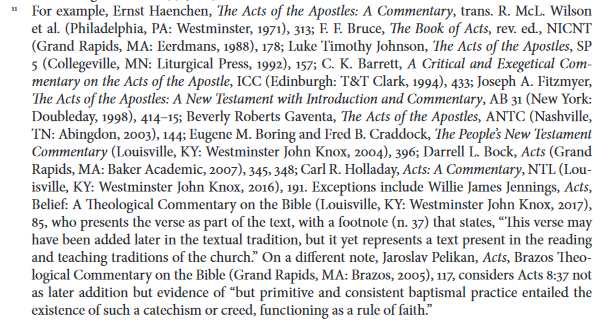 Willie James Jennings, Acts, Belief: A Theological Commentary on the Bible (Louisville, KY: Westminster John Knox, 2017), 85, who presents the verse as part of the text, with a footnote (n. 37) that stales, “Ihis verse may have been added later in the textual tradition, but it yet represents a text present in the reading and teaching traditions of the church.” On a different note,

Jaroslav Pclikan, Acts, Brazos Theological Commentary on the Bible (Grand Rapids, MA: Brazos, 2005), 117, considers Acts 8:37 not as later addition but evidence of “but primitive and consistent baptismal practice entailed the existence of such a catechism or creed, functioning as a rule of faith.”
Last edited: Mar 13, 2021

Acts 8:37 – Sorting out the Evidence
Presented by James Snapp, Jr.
(with assistance from members of the NT Textual Criticism group on Facebook)
April 2014

Thanks!
A thought on this paper:

It would be interesting to study the reception history, as is sometimes done with the heavenly witnesses, the Mark ending and other variants.

James Henshall gave us a fine paper in 1860:

In recent times Jenny Read-Heimerdinger has discussed the verse, from a more creative perspective, with sympathies to the Western text.

This gives an apparatus at the page url.

Interestingly, the key paper that challenges the listless analysis that we generally see is by James Snapp, Jr!

Acts 8:37 – Sorting out the Evidence
Presented by James Snapp, Jr.
(with assistance from members of the NT Textual Criticism group on Facebook)
April 2014

The evidences in the paper from James go far beyond what is normally presented.

In addition I have attempted to summarize the early church writers.

Quite a strong and formidable list of early church authorities who had the verse in their Bibles.

My suggestion: this should all be revisited with a tabula rasa.
Your thoughts?