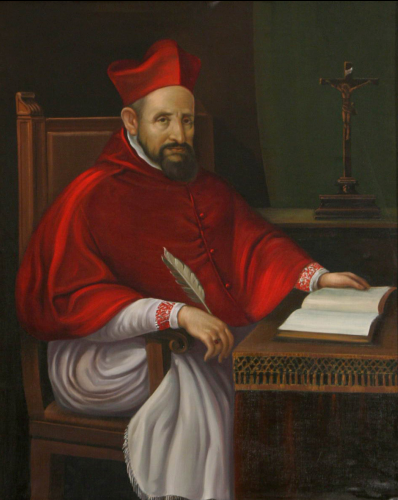 "Now that the book of Mark was written in Latin by Mark himself at Rome, and then was by the same turned into Greek at Aquileia, is taught by Adrianus Finus in Scourge of the Jews bk.6 ch.80 and bk.8 ch.62, and by Petrus Antonius Beuther who followed Finus in his notes 8 and 9 on Sacred Scripture. In the life also of St. Peter which holds first place in the Pontifical of Damasus, it is sufficiently openly indicated that Mark’s Gospel was initially written by him in Latin."
Click to expand...

Good question. Erasmus, Cajetan and Melchior Cano had expressed some doubts on the Mark ending, or noted it missing in some Greek mss. However that seems to based mostly on the Eusebius-Jerome comments. Bellarmine did work with Vaticanus, so that could have been a major influence. Still, the comment is surprising.

Some of Bellarmine's most interesting comments are on Mark in Latin. (I am using another site.)

St Robert Bellarmine: Chapter Seven: On the Greek Edition of the New Testament

St Robert Bellarmine: Chapter Seven: On the Greek Edition of the New Testament

"Now that the book of Mark was written in Latin by Mark himself at Rome, and then was by the same turned into Greek at Aquileia, is taught by Adrianus Finus in Scourge of the Jews bk.6 ch.80 and bk.8 ch.62, and by Petrus Antonius Beuther who followed Finus in his notes 8 and 9 on Sacred Scripture. In the life also of St. Peter which holds first place in the Pontifical of Damasus, it is sufficiently openly indicated that Mark’s Gospel was initially written by him in Latin."

Rarely have I seen a good study of the question of Mark writing in Latin (or two editions, or a Graeco-Latin dialect) despite the fact that this has been shared by solid scholars. The textual critics appear to have a blind-spot of Greek Onlyism .

No, I definitely do not ascribe to Markan priority for myriad reasons.

And the astute Ben C. Smith gave some new dependency reasons that point against Markan priority.

And since Ben is posting on a skeptic site, I expanded it a bit from an evangelical perspective here, and include the Galilee resurrection appearance question, that indicates Mark depending on the publication of Matthew (and possibly John).

There is a lot of error built around Markan priority theory. We will leave that open for discussion here, and in the next post show why Markan priority is a totally false theory. As a bonus this adds to the overwhelming evidences for the authenticity of the traditional ending of Mark. And I...
purebibleforum.com

And I think you are overstating the issue of "verbal coherence". When we have scholars who say there are many linguistic indications of our Greek Gospel of Mark being translation Greek, either from Aramaic or Latin. And remember, some theories are of Mark putting forth two editions, as above:

"then was by the same turned into Greek at Aquileia"

Bellarmine also has a second spot:

Book Two: On the Hebrew, Chaldee, Greek and Latin Vulgate Editions Chapter Fifteen: On Vernacular Editions There is a controversy between Catholics and heretics about whether it is necessary or at …

"For there are those who reckon that Mark’s Gospel, as we also advised above, was written at Rome in Latin by Mark himself, and was afterwards by him translated into Greek, about which see Damasus in his Life of Blessed Peter, Adrianus Finus Scourge against the Jews bk.6 ch.80 and bk.8 ch.63, and Peter Antonius Beuter note 90 on Sacred Scripture."

Please note that there is just as much an imperative to "prove Mark was first written in Greek" than in Latin.

Markan priority has entangled many textual critics, along with the Greek-Onlyism myopia .
Click to expand...

Collins
"Like the books of Moses. Mark ts the product of a long process of tradition involving many authors and editors ... in neither case does the narrator speak in his own name."

Jurgen Regul has also argued that Papias invented the pedigree of the Gospel of Mark spinning this story out of one of the references to a man called Mark in the New Testament, namely. I Pet 5:13. 1 Peter was probably written in Rome between 80 and 100 CE.

"Then he says. ’After their departure [that is. their deaths], Mark, the disciple and interpreter of Peter, did also hand down to us in wtiiting what tiad been proclaimed in Peter (3.1.1)."

Then goes into the Westcott-Hort recension geographical difficulties, like the swine marathon from Gerasa and the 7:31 transit route. Nothing to do with the Byzantine / Received Text. 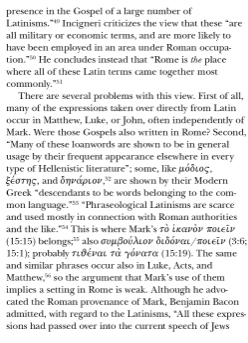 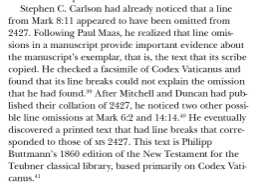 The traditional view of the origin and purpose of Mark’s Gospel is that it was composed in Rome soon after the death of Peter in the 60s CE. From this point of view, Mark’s purpose was to give an account of Jesus’ words and deeds based on Peter’s recollections and to preserve the traditions about Jesus.¹ William Wrede and the form critics, however, argued that much of the tradition in Mark was created after the death of Jesus and that Mark’s interests were more theological than historical.² In the second half of the twentieth century, the origin and purpose of...
Last edited: Mar 17, 2021

Roman Catholic and Protestant exegetes held many beliefs about the textual basis of Scripture in common, with their dispute over the more authentic textual tradition boiling down to a disagreement over the level of corruption of the later Greek manuscripts.25 Each side acknowledged that the New Testament was originally penned in Greek and conceded that an error-free Greek original would, were there an extant copy, be the optimal basis for theological debate.26 Both recognized the value of text-critical tools, though Roman Catholics believed that Jerome had already applied these sufficiently in establishing the Vulgate text in the fourth century.27 Roman Catholics and Protestants alike recognized some(minimal) degree of error in their own favored text tradition. While Martin concedes scattered flaws in the current Vulgate text, he adds that these have already been identified by the theologians at Trent so that they may be “throughly mended.” Willet, similarly, admits that there are imperfections in the textus receptus Greek, though he maintains its priority by adding that “for one scape in the Greeke, it is an easie matter to shew twentie in the Latine.”28 Willet also demonstrates an awareness that Stephanus does not always represent the best Greek manuscripts. p. 59

Peter, good question. And I have not seen Bellarmine take the Greek NT over the Latin Vulgate. Whitaker does review a dozen NT spots where Bellarmine defends the Vulgate. (Peter likely knows this discussion, and I am not checking OT.)

A Disputation on Holy Scripture: Against the Papists, Especially Bellarmine and Stapleton,
William Whitaker
https://books.google.com/books?id=WK7yPBiP1GcC&pg=PA193
CHAPTER XII.
OF CORRUPTIONS IN THE LATIN EDITION OF THE NEW TESTAMENT.

Keep in mind though that the Latin Vulgate does not have radical excisions (Pericope Adulterae, Mark ending) nor does it have many hard errors, as you see today in the Westcott-Hort recension texts. One hard error comes to mind, the geographical location of the Gerasenes, (Gerasa), the swine marathon, but I have not seen that come up in the debates of the era.

One other point. The Reformation Bible editions, from the Received Text, were already built on Greek and Latin sources (and early church writers and faith-consistent textual analysis and with Syriac availability.) So their editions were already appropriately eclectic, while the Vulgate defenders were more stuck in Latin-Onlyism, although they could claim that Jerome had done the proper Greek vetting.

Yet there was a very nice direct response to Bellarmine by:

Clearly the Mark ending and the Pericope Adulterae were generally in Greek manuscripts even before the Textus Receptus editions.

The heavenly witnesses was now in the Textus Receptus editions, an example of the TR drawing from the Latin tradition.

Bellarmine
“for thine is the kingdom and the power and the glory for ever.” ....Tertullian, Cyprian, Ambrose, Jerome, Augustine expound the Lord’s prayer and yet make no mention of these words, although all the Greeks know them well.
Click to expand...

Robert Rollock
L. Valla answereth, this place is not added to the Greek, but detracted from the Latin; and I pray you, what heretical or unsound matter hath this place ?
Click to expand...

Note the defense of Burgon and Gavin McGrath, Ambrose is said positive, check the Bellarmine info.

Romans 12:11 (AV)
Not slothful in business; fervent in spirit; serving the Lord;

1 Corinthians 7:33 (AV)
But he that is married careth for the things that are of the world,
how he may please his wife.

Finally it is clear that in many Greek codices there are missing many parts of the true Scripture, as the story of the adulteress John ch.8. The last chapter of Mark, the very beautiful testimony to the Trinity, I John, and others that we discussed above. It is also clear that certain things are found in all the Greek codices that are not parts of divine Scripture, as in Matthew ch.6 is added to the Lord’s prayer, “for thine is the kingdom and the power and the glory for ever.” That these words are not in the text but were added by the Greeks can be understood from two things.