Burgon on the Received, Traditional Texts - "the one great fact"

"The one great Fact"

XIII. The one great Fact, which especially troubles him and his joint Editor,1—(as well it may)—is The Traditional Greek Text of the New Testament Scriptures. Call this Text Erasmian or Complutensian,—the Text of Stephens, or of Beza, or of the Elzevirs,—call it the Received, or the Traditional Greek Text, or whatever other name you please;—the fact remains, that a Text has come down to us which is attested by a general consensus of ancient Copies, ancient Fathers, ancient Versions. This, at all events, is a point on which, (happily,) there exists entire conformity of opinion between Dr. Hort and ourselves. Our Readers cannot have yet forgotten his virtual admission that,—Beyond all question the Textus Receptus is the dominant Græco-Syrian Text of a.d. 350 to a.d. 400. 2

Obtained from a variety of sources, this Text proves to be essentially the same in all. That it requires Revision in respect of many of its lesser details, is undeniable: but it is at least as certain that it is an excellent Text as it stands, and that the use of it will never lead critical students of Scripture seriously astray,—which is what no one will venture to predicate concerning any single Critical Edition of the N. T. which has been published since the days of Griesbach, by the disciples of Griesbach's school.
Click to expand... 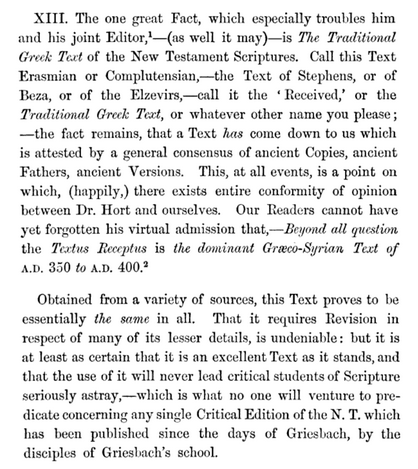 There are a number of superb Burgon comments.
Last edited: May 21, 2021

Donald Waite made special note of this, adding:

Burgon's Warnings on Revision of the Textus Receptus and the King James Bible
Donald. A. Waite
http://deanburgonsociety.org/DeanBurgon/dbs0804.htm

Dean Burgon, in his masterful style, used various Greek texts by different names, yet equated them for the most part as being identical. Note these names: (1) the Traditional Text; (2) the Erasmian text; (3) the Complutensian text; (4) the Stephens text; (5) the Beza text; (6) the Elzevir text; (7) the Received Text; and (  the Textus Receptus. He then agrees wholeheartedly with Westcott and Hort that this eight-named text, that is, the "Textus Receptus," is the dominant text of A.D. 350 to A.D. 400. Note also that Dean Burgon said that this eight-named text is "attested by a general consensus" of (1) ancient copies, (2) ancient Fathers, and (3) ancient versions.
Click to expand...

Burgon was far more nuanced and strong in understanding than the one-dimensional 1970s Majority and Byzantine movement.
Burgon
worked off his Seven Notes of Truth
1. Antiquity, or Primitiveness;
2. Consent of Witnesses, or Number;
3. Variety of Evidence, or Catholicity;
4. Respectability of Witnesses, or Weight;
5. Continuity, or Unbroken Tradition;
6. Evidence of the Entire Passage, or Context;
7. Internal Considerations, or Reasonableness
often did not take the Majority Greek
never attacked Acts 8:37 which he used in commentary
never attacked 1 John 2:23b
wrote in a classical ad hominem fashion on the heavenly witnesses
views changed over time
flipped on at least one verse
equated the Traditional and Received Text

Vulgarities, sicknesses, accusations, trickery. Even a childish wager.
Mostly from MMR, egged on and poisoned by the sick Bill Brown.

Very confused and sick puppies.
And all because MMR is weak in English (root cause, combined with arrogance, posturing, etc.)

Hort ... 4 The fundamental Text of late extant Greek MSS. generally beyond all question identical with the dominant Antiochian Gnrco-Syrian Text of the second half of the fourth century'

We request, in passing, that the foregoing statement may be carefully noted. The Traditional Greek Text of the New Testament,—the Textus Receptus, in short,—is, according to Dr. Hort, ‘ beyond all question’ the ‘Text of the second HALF of THE fourth century.’ We shall gratefully avail
ourselves of his candid admission, by and by. p. 257-258
Click to expand...

And once again, Burgon equates the Received and Traditional text.