The New Hampshire Confession was mentioned by Thomas Ross

Confessional recognition of the Textus Receptus or Received Text by Baptist churches proves that the TR and the KJV are the perfectly preserved Word of God.

[88] The Ben Chayyim text fully points the Tetragrammaton as Yehowah (hÎOwh◊y), while the Hebrew CT removes the cholem (hÎwh◊y), leaving Yeh-wah, which, as it obviously is missing a vowel, is more open to critical emendation to an alternative pronunciation. It should be mentioned that no Hebrew MSS in existence actually points the Name as “Yahweh.” For one who maintains Biblical presuppositions, it is inconceivable that God would allow the correct pronunciation of His Name to be lost (cf. Exodus 3:15, Psalm 9:10, Proverbs 18:10, Joel 2:32, etc.), so the pointing actually in the Hebrew text must represent the correct pronunciation, Yehowah or Jehovah (see “Appendix: The Vocalization of the Tetragrammaton” in “Evidences for the Inspiration of the Hebrew Vowel Points,” Thomas D. Ross, https://faithsaves.net; “Jehovah,” Scott Jones, http://www.lamblion.net/Articles/ScottJones/jehovah1.htm; “Who is this Deity Named Yahweh?” Thomas Strouse, http://www.deanburgonsociety.org/CriticalTexts/yahweh.htm, and The Name of God YeHoWaH, which is Pronounced as it is Written, I_Eh_oU_Ah: Its Story, Gérard Gertoux, Lanham, MD: University Press of America, 2002, for defenses of the traditional rendering of the Tetragrammaton). Satan is the one who wishes men deny or doubt the Name of God. The difference between the Old Testament Textus Receptus, the 1524-5 Rabbinic Bible edited by Ben Chayyim, and the current critical Hebrew OT, adopted in 1937 and the standard for modern Bible versions, is explained on pgs. 27-28, Defending the King James Bible, D. A. Waite, Collingswood, NJ: Bible For Today Press, 1999. It should be noted that, strictly speaking, both the Hebrew TR and CT are editions of the Ben Asher Masoretic Text, a point not clearly brought out in the source here listed.


[65] pg. 382, ibid. The Conservative Baptist Association in 1947 also stated that their “brief and simple confession . . . is but a re-affirmation of the substance of the historic Philadelphia and New Hampshire Confessions of faith.” (pg. 383, ibid.)


[66] “This body reaffirm its acceptance of the New Hampshire confession of faith; so long held by our American Baptist people” (“Doctrinal Statement of the American Baptist Association,” appearing first in their year book of 1944, quoted from pg. 378, Lumpkin, Baptist Confessions of Faith.) 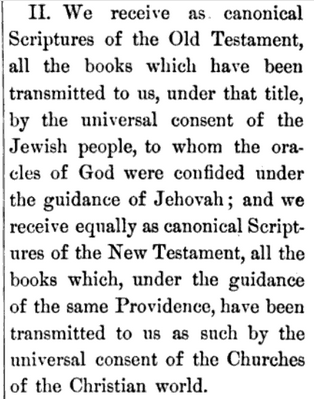 p. 835
The Second Helvetic Confession
‘I the Lord, Jehovah, the merciful God, gracious and long-suffering, and abundant in goodness and truth,’ etc. (Exod. xxxiv. 6).