Firmin Abauzit (1679-1767)
https://en.wikipedia.org/wiki/Firmin_Abauzit
wiki is a good review, and could use this addition

Doug Cox
Firmin Abauzit (1679-1767) was the author of Essai sur l’Apocalypse, 1730, “in which he tries to show that the book was written under Nero, and is in its prophecy only a development of the sayings of Christ about the fall of Jerusalem; that all refers to the destruction of this Jewish capital and the Roman-Jewish war (ch. xxi. and xxii.); to the more extensive spread of the Christian Church after that catastrophe. Dr. Leonard Twells replied to it; on reading Dr. Twells’ reply, Abauzit was satisfied, and honourably wrote (though in vain) to stop the reprinting of his work in Holland.

Abauzit’s work was translated to English. [1] ”

1. Firmin Abauzit. A Discourse Historical and Critical on the Revelations ascribed to St. John. London, 1730.
Click to expand... 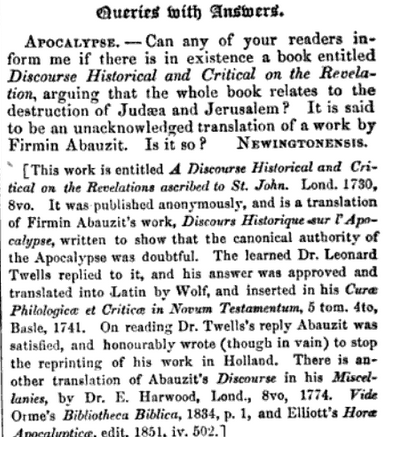 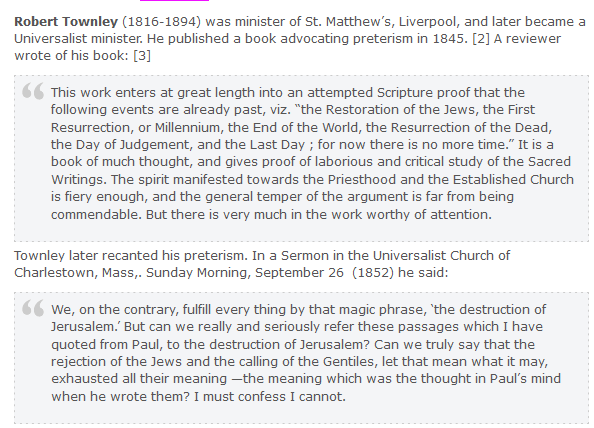 The following one does not really seem to be a recantation, especially when looking at the final quote from Richard Acland Armstrong.

Philip S. Desprez (1812-1879)
wrote a commentary on the Apocalypse advocating preterism, [4] which received the following review in the Quarterly Journal of Prophecy (1856):

4. Philip S. Desprez, B.D. The Apocalypse Fulfilled in the Consummation of the Mosaic Economy, and the Coming of the Son of Man. Second Edition. London: Longman. 1855.

The Apocalypse Fulfilled: In the Consummation of the Mosaic Economy and the Coming of the Son of Man : an Answer to the Apocalyptic Sketches and The End
https://books.google.com/books/about/The_Apocalypse_Fulfilled.html?id=Il0TAAAAYAAJ
Last edited: Mar 24, 2021

An Overview and History of Preterism and Other Eschatologies
https://www.google.com/url?sa=t&rct...reterism.doc&usg=AOvVaw2itz5_7bNFIezeKFqZlchd

Those who support Preterism claim this was the eschatology of the early church. Historicists reject this claim by Preterists. Preterism is seen to have developed in the 1600’s by a Catholic Jesuit named Luis De Alcasar. This first systematic Preterist work was written during the Counter Reformation in reaction to the Historicist eschatology that identified the pope as the anti-christ or the beast of Revelation. It would appear that the Preterist view was identified and developed by the Catholic Church to resist the Reformers Historicism.

In an attempt to reunite the Catholic and Protestant Christians in 1640 a Dutch Protestant named Hugo Grotius wrote “Commentary on Certain Texts Which Deal with Antichrist.” In this work he argued that the biblical verses concerning the Antichrist had found their fulfillment between 30-70 AD. Protestants rejected this work but Grotius extended his Preterist views into Matthew 24-25 and the entire book of Revelation in his New Testament commentary written between 1641-1650.

This was followed by the English commentator Thomas Hayne work “Christ’s Kingdom on Earth in 1645 which claimed Daniel’s prophecies had all been fulfilled between 30-70 AD. A few Protestant commentators followed but Preterism was not accepted for another 100 years. Two major systematic works by Protestant Preterists were produced: Firmin Abauzit (1730) and Robert Townley (1845). Both Abauzit and Robert later recanted and rejected their own works.
Click to expand...

The preterist hermeneutic, according to James Durham, had arisen through the influence of a Spanish Jesuit, Luis de Alcasar, 81 who had put forward the argument that the book of Revelation had reference only to the pre-Constantine age and related solely to the experiences of the church under the Roman Empire. 82 Henry Alford’s statement that “the Praeterist view found no favour, and was hardly so much as thought of in the times of primitive Christianity”, 83 is equally true of seventeenth-century Christianity. In English thought, the schoolmaster Thomas Hayne contended that Daniel’s prophecies had been entirely fulfilled in the history of Israel up to the time of Christ,84 as also did Joseph Hall, who noticeably declined to make any similar pronouncement concerning The Revelation. Henrv Hammond, who in 1647 had become chaplain to Charles I, appears to have been the first English writer seriously to have adopted Alcasar’s interpretation. 85 Although the work in which his views appeared went through several editions after its first appearance in 1653, there is no evidence of any wider involvement with preterism in pre-Restoration thought. 86 The failure of preterist reasoning to make any significant impact may be explained by the familiarity with ecclesiastical history which characterised the thinking of most scholars and divines, and which naturally precluded any attempt to place all those prophecies of a future bright with hope in a past which frequently had been so hopelessly dark. 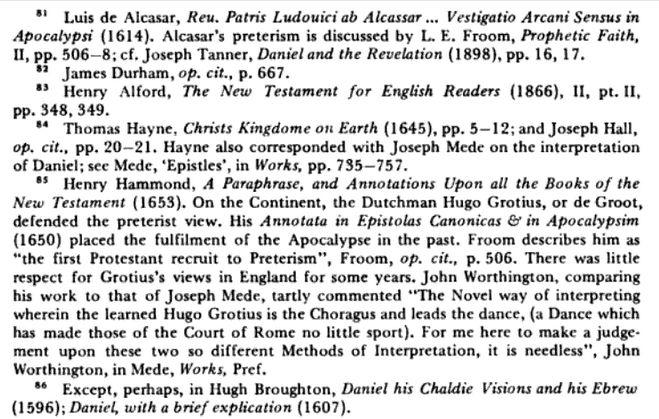