In comparison to all other extant ancient works, the writings of Tertullian of Carthage against Marcion remain the fullest and most precise rejection of Marcion’s theology. Tertullian composed as least six works against Marcion, including his Prescription against Heresies and Five Books against Marcion which are extant today.[37] In the Prescription against Heretics, Tertullian made a number of accusations concern Marcion’s use of scripture, canon, and authority, perhaps the most clear being that Marcion had induced a schism within Catholic church authority.[38] (continues)
Click to expand...

In general terms, most of what is believed to be likely to be the exact Greek text of Marcion's NT, which doesn't come from the manuscripts of the NT themselves (in any case), are the quotations found in the Panarion of Epiphanius, in part of book 1 about Marcion.
Click to expand...

All give insights on Marcion’s Apostolikon and Euangelion.

BeDuhn acknowledges (with von Harnack) that only three primary sources for this Herculean effort remain: Tertullian, Epiphanius, and a third anonymous author, all of whom write in a polemical tone and “make no attempt to quote every word of Marcion’s text” (34). Otherwise, only a handful of lesser witnesses may be accessed, including the so-called “Marcionite Prologues to the works of Paul” in the Apostolikon.
Click to expand...

PBF
Marcion is popular with scholars who theorize a 2nd-century New Testament
https://www.purebibleforum.com/inde...ho-theorize-a-2nd-century-new-testament.1737/

Then they can come up with absurd theories, like BeDuhn and Markus Vinzent. Thus Reviews by Ehrman et al will be positive.

Wikipedia has the Marcion hypothesis, a type of Marcion priority.
https://en.wikipedia.org/wiki/Marcion_hypothesis

Biblical scholars as varied as Johann Salomo Semler, Johann Gottfried Eichhorn, Albert Schwegler, Albrecht Ritschl, John Knox,[8] Paul-Louis Couchoud, John Townsend, Joseph B. Tyson,[9] Jason BeDuhn, Markus Vinzent, Matthias Klinghardt,[10] and David Trobisch[11] have dissented from the traditional view that the Gospel of Marcion was a revision of the Gospel of Luke (this traditional view may be called the "patristic hypothesis"). They argue that at least the Gospel of Luke is either a later redaction of the Gospel of Marcion ("Schwegler hypothesis"), or that both gospels are redactions of some prior gospel –a "proto-Luke" – with Marcion's text being closer to the original ("Semler hypothesis"). Several arguments have been put forward in favor of those two latter views. Vinzent and Klinghardt argue that all four canonical gospels post-date the Marcionite gospeltext (though they differ on who might have written it).
Click to expand...

Since Luke was written to the high priest Theophilus, c. 41 AD, this is all nonsense.

Even if you do not accept the Theophilus proposal, Luke was written by 50 A.D.
And the terminus ante quem has to be before Acts, ergo. 60 AD although that really does not work.

The essence of liberalism throughout its history is the importation into the church via the use of Christian terminology, of the various historic expressions of pagan notions, in particular, the denial of God’s transcendence. In this sense, the first “liberals” were the Gnostics. Certainly a form of Gnosticism, sometimes called proto-Gnosticism is behind the denial of the incarnation in the Johannine epistles, and of the resurrection in the early and later Paulines. Interestingly, the Liberals of the modern period have had great admiration for the proto-Gnostics, in particular, Marcion. In A.D. 150, Marcion, a theologian from Pontus in Asia Minor, was excommunicated from the Church in Rome for heretical teaching. He dismissed God the Creator, the Old Testament, the Mosaic Law, and three of the gospels. From the few epistles of Paul that he accepted, he expunged Old Testament quotations and claimed to worship the “alien god” behind the God of Scripture. [15] Tertullian (AD 160â€‘225) called Marcion “the Pontic mouse who has nibbled away the Gospels . . . abolished marriage,” and . . . tore God almighty to bits with [his] blasphemies,” [16] and Polycarp (A.D. 69â€‘155), who knew the apostle John, called Marcion “the firstâ€‘born of Satan.” [17]

In spite of Marcion’s massive rejection of early Christian orthodoxy, and his denunciation and excommunication by the second century Church, the great nineteenth century Liberal historian and theologian, Adolf von Harnack, called Marcion “the first Protestant.” For Harnack, “Protestant” meant “liberal.” The similarly sympathetic judgment by Helmut Koester, a Bultmannian New Testament scholar, lately at Harvard, calls Marcion “a textual critic, philologian and reformer.” [18] When these church fathers are dismissed by contemporary liberal scholars as “myopic heresy hunters,” [19] and the terms “Protestant” and “reformer” are associated with the Gnostic Marcion, making him a virtual second-century Martin Luther, we must see that we are in the presence of a “palace revolution.” The popularity of Marcion can only be understood in the light of the present-day Gnosticization of Biblical Studies. Liberal Lutheran Koester is disarmingly clear. He urges scholars to abandon the New Testament canon in order to allow the other early Christian voices–“heretics, Marcionites, Gnosticism, Jewish Christians, perhaps also women—. . . to be heard again.” [20] The contemporary promotion of the Nag Hammadi Gnostic texts as a valid expression of early Christianity is a further example of liberalism’s predilection for Gnosticism. This is in no sense a “reformation”: it is rather a profound revisionism of Christian history leading to a major theological revolution, namely, the normalization of heretical Gnosticism in contemporary mainline Christianity.

[19] James M. Robinson, “Introduction,” The Nag Hammadi Library in English (San Francisco: Harper and Row, 1977), pp. 3, 6, 7, 16 and 24. Eight times in this introduction to the critical edition of the Gnostic texts, Robinson describes the anti-Gnostic church fathers this way.

[20] In the volume, published in Koester’s honor, The future of Early Christianity: Essays in Honor of Helmut Koester, ed. Birger A. Pearson (Minneapolis: Fortress Press, 1991), 472.
Click to expand...

the propositions of Joseph B Dyson, Markus Vinzent, or Matthias Klinghardt, that some or all of the Gospels were written after marcionite 'canon'.
http://www.rationalskepticism.org/christianity/historical-jesus-t219-41960.html
Also discusses Carrier, Doherty, mythicists.

This is an example, from a review of:

Marcion and the New Testament: An Essay in the Early History of the Canon (1942)
John Knox
https://www.amazon.com/Marcion-New-Testament-John-Knox/dp/0404161839

But Professor Knox makes claims that go beyond these very sound positions. He believes that Marcion preceded not only our canon but even the compilation of Luke-Acts, the emergence of the four Gospels, and the existence of any other Gospel-Apostle combination, and that the first two of these events as well as Catholic Christianity’s acceptance of a Pauline collection are all due to Marcion’s influence or rather to reaction against him. To meet Marcion, orthodoxy partly countered him and partly went him one better. Thus Knox believes that over against Marcion’s combination of a single gospel and the letters of Paul the Church provided in Luke-Acts not only a much fuller gospel including many things that would have been objectionable to the heretic, but a historical continuation that associated Paul with other apostles and put him in a less extreme light than, say, Galatians did.
Click to expand...

Markus Vinzent
‘Marcion and the Dating of the Synoptic Gospels’
blog
http://markusvinzent.blogspot.com/2016/11/i-am-in-process-of-reading-your-book.html

.... the inclusion of the gospel used by Marcion. This gospel is not a redaction of Luke, but rather precedes Matthew and Luke and, therefore, belongs into the maze of the synoptic interrelations.
Marcion and Luke-Acts: A Defining Struggle Annotated Edition (2006)
Joseph B. Tyson
https://www.amazon.com/Marcion-Luke...?asin=1570036500&revisionId=&format=4&depth=1

Building on recent scholarship that argues for a second-century date for the book of Acts, Marcion and Luke-Acts explores the probable context for the authorship not only of Acts but also of the canonical Gospel of Luke. Noted New Testament scholar Joseph B. Tyson proposes that both Acts and the final version of the Gospel of Luke were published at the time when Marcion of Pontus was beginning to proclaim his version of the Christian gospel, in the years 120-125 c.e.
Click to expand...

This book puts forward the Baur / Knox thesis that canonical Luke and Acts were composed in the 2nd century in order to combat Marcionism (the theology which regarded the God of the Old Testament as different from and inferior to the God of Jesus and Paul).
It is well argued, and very scholarly in the way it references and uses works
However it has the typical fault of liberal scholarship, which is to submerge all concern for the truth into the motivation of the writer.
Tyson supposes the author of canonical Luke-Acts to have just made up stuff in the 2nd century in order to counter Marcionism without any concern for the truth of the events the books claim to report.
1. He dismisses too easily an early (pre 70) date of Luke and Acts
'probably' … 'almost certain' to be 2nd century
The arguments of later Harnack and Robinson et al cannot be brushed off lightly
2. He ignores the possibility of there being motivation in the 50s and 60s to write against 'Gentile' tendencies (downgrading Judaism, the Mosaic Law etc) in the early church. Paul's letters were circulating, everyone could read them. Luke-Acts could have been composed partly to combat that sort of view, showing how Peter and Paul worked in harmony, Paul was always a loyal Jew and so on.
3. He breathtakingly assumes that Luke 1-2, 24 and the whole of Acts were 'composed' about 125 AD, basically, out of thin air. He does not even mention sources, eyewitness accounts … for this extra material that he thinks was added to 'original Luke'. He thus makes the preface, in its talk of truth, into a lie, and does not even comment on this anomaly!
4. In particular he ignores the 'we' passages in Acts, apart from one mention in a footnote. Was there a companion of Paul who wrote them? Not according to Tyson, who thinks it was all made up 80-90 years later by someone who never knew Paul!
Click to expand...

The History of the Christian Religion to the Year Two Hundred
Last edited: Mar 21, 2021

Unlike many other scholars, however, BeDuhn is less attracted to Marcion himself and more to his influence on the development of the Christian canon, stating from the outset that we “know the name of the individual responsible for the first New Testament” (3), and indicating that here we have evidence of the first biblical canon as a “collection of authoritative books” (4). He asserts that both the idea and “distinctive structure” of a New Testament can be associated with Marcion’s efforts (7), thus making this figure a key sponsor for the rise of later considerations about canon and sacred texts.
Click to expand...

"Critics of Marcion like Tertullian and Epiphanius complained that Marcion cut and edited scripture to fit his beliefs. Biblical scholar Adolf von Harnack accepted this claim in his definitive text on Marcion: Marcion: The Gospel of an Alien God (1920). However, Tertullian and Epiphanius lived several generations after Marcion, and they assumed the New Testament they read already existed in Marcion’s era. It didn’t. Marcion’s [early] critics were reading history backward instead of forward: there was no New Testament yet."
Click to expand...

Still liberal and late dating, just not as absurd as the 2nd century theorists

This may be the classic write-up on the doctrinal and historical issues. 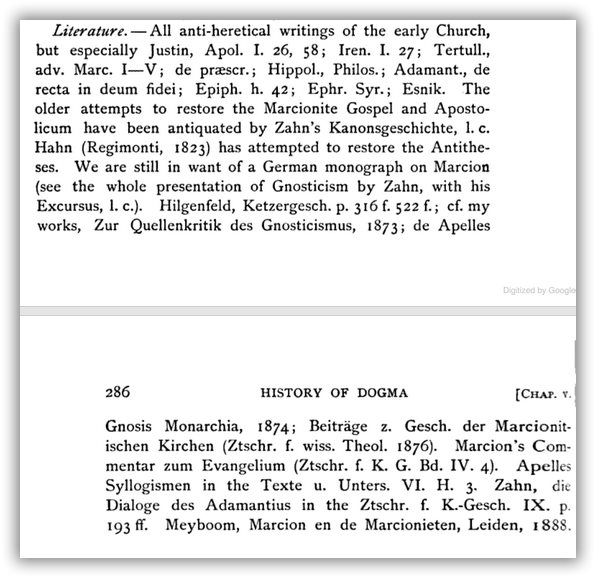