Scrivener - "It will be for expert palaeographers to determine ... suggest a later date"

This can be added to the planned post to Brent Nongbri 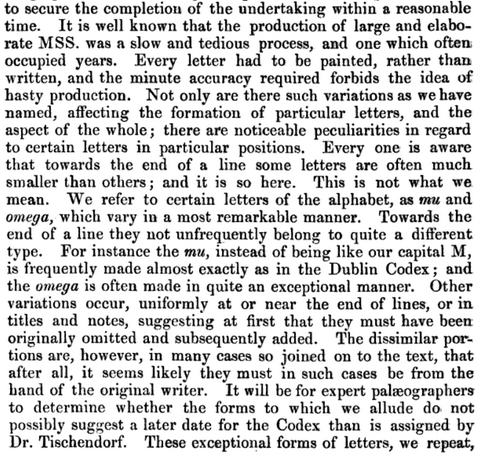 It will be for expert palaeographers to determine whether the forms to which we allude do not possibly suggest a later date for the Codex than is assigned by Dr. Tischendorf. These exceptional forms of letters ...

A New Article on the Date of Codex Sinaiticus
https://brentnongbri.com/2022/08/03/a-new-article-on-the-date-of-codex-sinaiticus/#comment-125917

READ THAT ONLINE TO CATCH UP.

Brent Nongbri has broken new ground, with a modern palaeographic questioning of the Tischendorf terminus ante quem 4th century date of Sinaiticus. (This has been questioned on other grounds, e.g. Adolf Hilgenfeld in the 1860s focused on the colophons in rejecting 4th century and going 200+ years later than Tischendorf.)

And there are many additional palaeographic and manuscript-ink and textual and linguistic puzzles in Sinaiticus that can use a fresh study. And I will mention only one here, to see if it might spark a little interest.

The Three Crosses Note, (which you can see here at the bottom of the fourth column:
https://codexsinaiticus.org/en/manu...lioNo=4&lid=en&quireNo=35&side=r&zoomSlider=0

And also can be seen in larger format here:
https://www.purebibleforum.com/inde...ced-300-years-after-production.563/#post-1141

is described by Dirk Jongkind in:

Studies of the Scribal Habits of Codex Sinaiticus (2005)
https://tyndalebulletin.org/article/29188-studies-in-the-scribal-habits-of-codex-sinaiticus.pdf

"There is a note in Sinaiticus telling us that ‘at the sign of the three crosses is the end of the seven leaves which are superfluous and not part of Esdras’. This note is in a later hand from the seventh or eight century and informs us that the original intruded text from 1 Chronicles contained two more leaves."

Let us accept that this script did not exist in AD 300-500. Remember, no one can predict or prefigure a future script, but any script can be copied 300 or 1500 years later. Some one in AD 700 or 1800 could copy the Sinaiticus classic box script, but nobody in AD 350 can write in a script that is has a terminus post quem of AD 600.

The three crosses note text, which Elijah Hixson calls upright ogival majuscule, has a script with a terminus post quem centuries after the supposed creation date of Sinaiticus.

And I think it is very fair to say that this note only makes sense as a scriptorium note. The note is pointing out a blunder of creating duplicate pages (which was not fixed, what a crew!) Thus the note has a type of external date, in that it is contemporaneous with the initial production of the manuscript. The theory that the note somehow happened 300 years after production is extremely unlikely, and only came into play to try to allow the Tischendorf 4th century prima manu theory. Interestingly, afawk, not one Sinaiticus writer has mentioned this severe chronological dissonance! And Tischendorf understandably placed this note as a scriptorium note in his LXX editions.

So are we forced to the virtually impossible idea that hundreds of years after production, in a faraway land, rifling through the manuscript, some reader actually worked out what happened centuries earlier and awkwardly put in the explanatory note, as if he was the scribe! hmmmm...

Or do we more properly use this note as strong evidence that the terminus post quem of Sinaiticus should be moved ahead to the terminus post quem of the note? And thus open the possibility of AD 700 creation, and also reopen the consideration that the text was actually produced c. AD 1840. Studying many factors, including which one is likely to emulate a much earlier main script.

dated to c. would only make sense as a scriptorium note, but because of the convoluted theories of scribes and correctors on Sinaiticus it is dated to about 300 years later, which simply makes no sense.

The accent marks in sections of Matthew and Hermas are not given real analysis.
When and why and by who? Can either actually be from the 300s?

The textual problems involving the earlier Simonides Shepard of Hermas are not given real analysis. Tischendorf had attacked the Simonides work on linguistic issues, until his very similar Hermas text was published, and Tischendorf quietly retracted the earlier attack. We have additional material in the New Finds that can be compared with the Simonides Hermas.

The condition of parchment and ink bewrays the early date. And we have a spots where ink that is supposed to be 1750 years old is next to AD 600 ink and next to c. 1850. None tested.

The Leipzig library pulled out of any tests in 2015. Were they a tad concerned that this valuable manuscript would be exposed as a relatively new manuscript?

There is some really oddball script that is never given palaeographic analysis. Did anybody write that way in the fourth century?

When and why would a "later hand" correct the colophons in Esther ?

The differences in colour and staining between the Leipzig and British sections are striking and acknowledged by the British Libary.

Scrivener looked at some additional script issues in 1863, and concluded :
"It will be for expert palaeographers to determine whether the forms to which we allude do not possibly suggest a later date for the Codex than is assigned by Dr. Tischcndorf."

Generally, the palaeographic analysis that has been done has been done by Tischendorf, who hid the actual manuscript away from scholars, or for the British Library. Difficult questions that might not jive with the early date were not the goal.