While I was fairly critical of Bill Cooper's ebook The Forging of Codex Sinaiticus (2016) in my review, I also praised the clarity of his writing and a number of points that he brought forth. Especially those where he appears to have done his own research. (Example: where he discusses the "india ink".)

Here is one section that is interesting, looking at how linguistics issues are combined with the place of production ideas of Westcott and Hort on Vaticanus. And the question arises as to whether they point to Rome, and even whether the Greek text had been written in Rome and subject to Latin influence (it is much easier for this to occur in later days, as James Donaldson pointed out in his analysis of Latin influence in Hermas and Barnabas in Sinaiticus.)


Steven Avery said:
There is an important point made from Westcott and Hort about Vaticanus that definitely needs a closer look. This has to do with linguistic Latin influences in names and a comment that Westcott and Hort made about the origin of Vaticanus, and even Sinaiticus being in Rome. Closely related would be the Latinization discussions of Erasmus relating to Vaticanus and the James Donaldson analysis of Sinaiticus. The possible Old Latin and Vulgate influences are a factor, and also the chapter sections in Acts.
Click to expand...

Now we go to chapter two and extract some points made by Cooper:

Tischendorf must have been stunned at the privilege extended to him, but there was a very good reason why Codex Vaticanus had been kept out of the public eye for so many centuries, and it is this. Its first mention occurs in the Vatican Library Catalogue of 1475 (in which it is given the shelf number 1209), and then in the Catalogue of 1481 (in which it is described as "Biblia in tribus columnis ex memb" - Bible in three columns on vellum - as if it was a new acquisition), all of which is more than a thousand years after its alleged composition.

.... As we have seen, it didn't come to light until 1475 when it was 'discovered' lying on a shelf in the Vatican Library, and it pretends to be a codex of Alexandrian (Egyptian) origin. It is a large codex which had strangely eluded the eye of every Vatican librarian for more than a thousand years past, or so we are asked to believe. However, a more microscopic examination reveals that it was actually written out in Rome itself prior to its 'discovery', and we know this from the following facts. ... the personal names in the codex are spelt as they appear in the Vulgate, and not as in the Greek mss - e.g. Isak (for Isaac) and Istrael or even Isdrael (for Israel) - and in the Book of Acts especially the chapter divisions are those of the Vulgate, and not of the Greek.10 Hence, the following admission is made by the two infamous editors of the Revised Version of 1881, Westcott and Hort, that Vaticanus and even Codex Sinaiticus had been written out in Rome, and not in Alexandria:

"In B [Codex Vaticanus] the Alexandrian indications are to the best of our belief wholly wanting.... Taking all kinds of indications together, we are inclined to surmise that B [Vaticanus] and ℵ [Sinaiticus] were both written in the West, probably at Rome; that the ancestors of B [Vaticanus] were wholly Western (in the geographical, not the textual sense) up to a very early time indeed ; and that the ancestors of A [Sinaiticus] were in great part Alexandrian, again in the geographical, not the textual sense. We do not forget such facts as the protracted unwillingness of the Roman church to accept the Epistle to the Hebrews, commended though it was by the large use made of it in the Epistle of Clement to the Corinthians...."11

In other words, the aptly named Codex Vaticanus has Rome and the Vatican written all over it. It was composed in Rome by forgers brought up in the Vulgate tradition, and hence of Vulgate habits and usages, doubtless shortly before its 'discovery' in 1475. Hence the 15th-century hand in which it is written, this hand seemingly overwriting an earlier attempt at its forgery. It was clumsy, yes, but for now it would have to do.

... Codex Vaticanus was forged almost a hundred years before the Jesuits were founded, and their hand in the affair is not noticeable until Tischendorf's time. From that time, however, the Jesuits became heavily involved in 'obtaining' allegedly ancient papyri that supported the text of Vaticanus to some extent. The most important of them, P75, erstwhile known as Bodmer XIV-XV, is now housed in the Vatican Library.

Now, my purpose is not to evaluate his overall position on Vaticanus or the Bodmer papyri he references. That would take us far afield. There are individual points he makes that we can discuss from the above.

Bill Cooper:
"and it pretends to be a codex of Alexandrian (Egyptian) origin."
Click to expand...

It is unclear what this assertion is based on.

Bill Cooper:
"It is a large codex which had strangely eluded the eye of every Vatican librarian for more than a thousand years past, or so we are asked to believe."
Click to expand...

This assumes that the conjectures story of Vaticanus has it in the Vaticanus library, rather than just .. places unknown. It also assumes that there were equivalent Vatican library catalogs in earlier years from which Vaticanus was omitted.

Bill Cooper:
"Its first mention occurs in the Vatican Library Catalogue of 1475 (in which it is given the shelf number 1209)"
Click to expand...

The 1475 catalog has had varying perspectives as to whether it references Vaticanus. I had not seen before that it uses the number 1209, and I will plan to include the references I had seen separately. Epp made a point to emphasize that he felt 1481 was the right date.

Now we go to the two points that I find most interesting.
First from Westcott-Hort:

Bill Cooper:
"were both written in the West, probably at Rome"
Click to expand...

This has long been a puzzling reference, which does deserve greater scrutiny.

Bill Cooper:
"the personal names in the codex are spelt as they appear in the Vulgate, and not as in the Greek mss - e.g. Isak (for Isaac) and Istrael or even Isdrael (for Israel)"
Click to expand...

This important linguistics assertion from Bill Cooper is taken from the Westcott and Hort example:

The New Testament in the original Greek, the text revised (1881)
B.F. Westcott and F.J.A. Hort
https://books.google.com/books?id=gZ4HAAAAQAAJ&pg=PA265 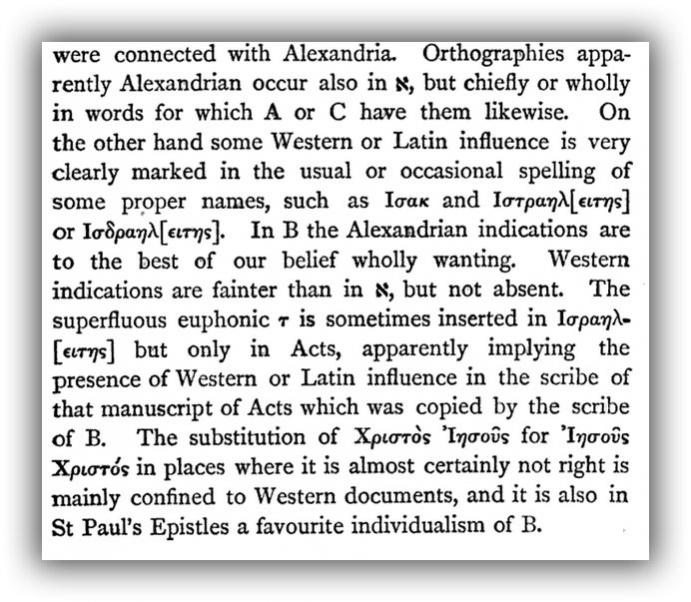 Here is the Latin name part from Hort along with the Bill Cooper take: 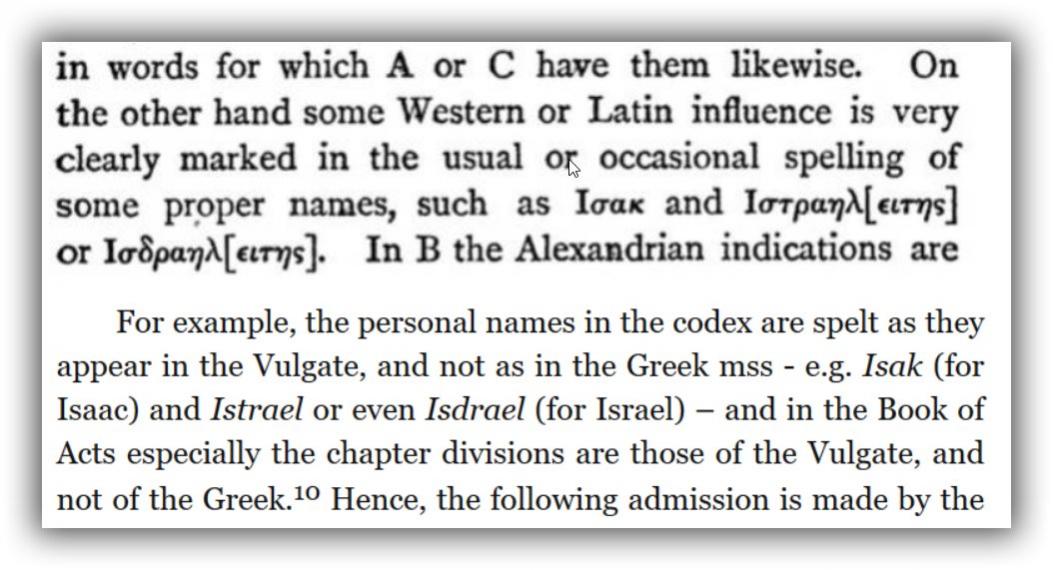 And here is a notation how the Old Latin Fleury Palimpsest (an Old Latin ms with parts of 1 and 2 Peter, 1 John and Revelation) uses one of these unusual forms: 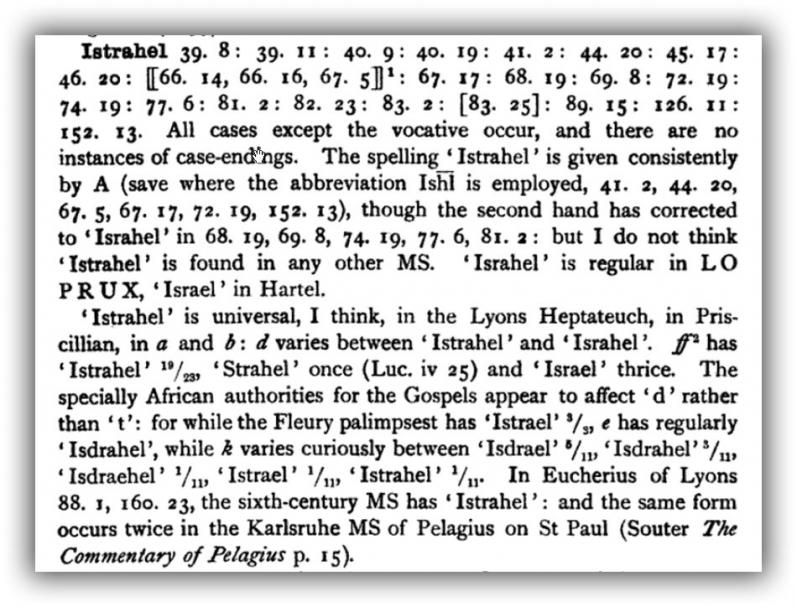 And here you can see the unusual form (which apparently would never be transmitted through a purely Greek line) in the Wordsworth Vulgate
https://archive.org/details/nouumtestamentu00whitgoog/page/n124

We welcome any input. Note how I point out above that Latinization in Vaticanus was an ongoing question in regard to Vaticanus (including Erasmus) and there is a separate PBF resource page on the topic.

theories of origin
date of composition
conjectured value of the ms.

Bill Cooper:
"and in the Book of Acts especially the chapter divisions are those of the Vulgate, and not of the Greek."
Click to expand...

This whole issue of the Book of Acts chapter divisions requires a reexamination. The Vaticanus divisions are considered to be a later hand, not the 4th century (c. 700 is their guess, from memory, which, ironically weakens any attempted Sinaiticus-Vaticanus antiquity connection involving those headings).

Now we know that Sinaiticus, with similar headings (although ending early on chapter 15 in the Sinaiticus hack job) as Vaticanus, is 1800s. Any other Greek mss should be discussed, and how different are the Vulgate chapter headings.

This issue is generally discussed separately, because it is given as an argument for authenticity ("how did Sinaiticus get such similar chapter headings as Vaticanus?") Yet it is very possible that the chapter headings in Sinaiticus were simply added in ad hoc in the Times of Tischendorf.

One article that looks to be helpful:

"Sagi ... like Mercati before him ... searched through various manuscript sources in vain for references to the manuscript"
Click to expand...

This may be Rossano on Vaticanus 1209

A key question here is identifying the "manuscript sources" which lacked references to Vaticanus. If these are sources that really should have been expected to have a note about the manuscript, that creates a cloud over the 1400s provenance.

We may also look at indications that "ancient" manuscripts could be created in that period. And in this regard, we would want to know about anomalies in the physical condition of the vellum and ink, such as the washing mentioned by Wieland Willker and the overwriting.

more on the Latin names in Vaticanus and Sinaiticus

This has been greatly expanded in post #1.
More is planned.

The textual critics have ignored the Hort comments on the Latin names with a 100-foot pole.

If you do not see the PICS , join the forum (and I will check how that works structurally.)
Last edited: Sep 26, 2021

Kirsopp Lake then turns to two spellings in Sinaiticus which, he claims, support an Egyptian origin. The first of these is the spelling κράβακτος for κράββατος or κράβαττος, , which is found in Sinaiticus in ten out of the eleven places where the word occurs, and Kirsopp Lake adduces specimens of the same spelling in papyri. This, so far as it goes, is certainly an argument in favour of an Egyptian origin, though it must be remembered that we have no comparable documents from any other region.

krabatos = bed
double b seems to be older Greek writtings

ΙΣΔΡΑΗΛΙΤΗΣ VS ΙΣΡΑΗΛΙΤΗΣ
WOULD be the diff in an uncial ms

"The second spelling is that of Ίσδραηλίτης for ’Ισραηλίτης, which is found in Sinaiticus in eight cases out of nine where it occurs, and which is found elsewhere only in Vaticanus, in the Old Latin, and in some papyri and other monuments from Egypt. Milne and I discussed this in Scribes and Correctors (pp. 66—7), where we quoted two inscriptions from Asia Minor in which the similar form Ίσδραηλίτης is found, and concluded that the argument was therefore not decisive."
Last edited: Dec 14, 2022

Isak is covered in the other thread.
Only in Barnabas? breathing mark on printed text ? Makes Yisak because of breathing Y
Check with other one.