Abgar of Edessa - correspondence with Jesus

There are connections with the Shroud of Turin and the Mandylion (which might be the Shroud.)
While the Shroud is most assuredly authentic, that does not make the Abgar letters authentic.

Bart Ehrman discusses on a recent blog about Jesus and writing. He tends to be superficial, however it got me thinking that there is no information post here. 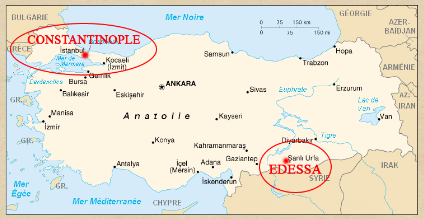 Copy of a Letter Written by Abgarus the ruler to Jesus, and sent to him at Jerusalem by Ananais the swift courier
Eusebius
https://books.google.com/books?id=boIXAAAAIAAJ&pg=PA100
https://www.newadvent.org/fathers/250101.htm

Egeria (circa 384 AD)
THE PILGRIMAGE OF S. SILVIA OF AQUITANIA TO THE HOLY PLACES (CIRC. 385 A.D.),
Translated, WITH INTRODUCTION AND NOTES, BY JOHN H. BERNARD, B.D.,
http://digital.library.upenn.edu/women/egeria/pilgrimage/pilgrimage.html

There are even more versions of it. There is an apocryphal text, called Greek Letter of Abgar, consisting of two letters, and a story of Mandylion. It is however worthy to note, that in the Acts of Thaddeus written circa 600 AD (although New Advent claims 250 AD see http://www.newadvent.org/fathers/0826.htm ) there is no written letter of Jesus, only oral message. It is one of the two texts (the other is ‘Story of the Image of Edessa’, written by, or on behalf of Constantine VII Porphyrogennetos) where the term tetradiplon appears.
https://shroudstory.com/2014/01/06/yannick-clment-on-the-letters-between-jesus-and-king-abgar/

Books Published in the Name of Jesus Christ and the Apostles. Of Several Forgeries by Early Heretics. Remarks on this Whole Question Richard Simon
Critical History of the Text of the New Testament
Andrew Hunwick
https://books.google.com/books?id=Ia01_pLxGr8C&pg=PA19
https://brill.com/view/book/9789004244214/B9789004244214_004.xml
https://www.google.com/url?sa=t&rct...4214_004.xml&usg=AOvVaw0IHSUMsBWrsNw3GEHO40f9
1689 edition
https://books.google.com/books?id=nYzPAAAAMAAJ&pg=RA1-PA12

The letter of Jesus Christ to Abgar, King of Edessa, does not seem totally fanciful since Eusebius,3 who adduces it together with the letter to Jesus from that Prince, declares that he got these two documents from the Edessa archives which contained the records of what happened in the reign of Abgar, and that in his own time they were still kept there written in Syriac, the language of the country from which they were translated into Greek. Nonetheless Pope Gelasius was right to reject the letter from our Lord to Abgar as apocryphal 4. Granted that the letters were indeed found in the archives in the city of Edessa; but we must not place our trust too readily in the beginnings of Churches; everyone enhances their history as best they can, quite unscrupulously forging documents in such cases when they have no genuine ones.

The Apocryphal and Legendary Life of Christ (1903)
By James De Quincey Donehoo
https://books.google.com/books?id=Q-ENAQAAMAAJ&pg=PA472

The Sociologogy of MMT and the Conversions of King Agbarus and Queen Helen of Adiabene (1992)
Robert Eisenman
https://roberteisenman.com/articles/mmt_agbarus.pdf

James the Brother of Jesus: The Key to Unlocking the Secrets of early Christianity and the Dead Sea Scrolls (1997)
"Judas the brother of James and the conversion of King Agbar".
Robert Eisenman
https://www.amazon.com/dp/B00AVWU87C/ref=dp-kindle-redirect?_encoding=UTF8&btkr=1 (2004)

Robert Eisenman suggests Queen Helena as one of the wives of King Abgar V, who allotted her the lands of Adiabene.[12] Professor Eisenman derived this association from Movses Khorenatsi mentioning the same famine relief to Judaea as does Flavius Josephus:

As to the first of Abgar’s wives, named Helena... She went away to Jerusalem in the time of Claudius, during the famine which Agabus had predicted; with all her treasures she bought in Egypt an immense quantity of corn, which she distributed amongst the poor, a fact to which Josephus testifies. Helena’s tomb, a truly remarkable one, is still to be seen before the gate of Jerusalem.[13]

Professor Eisenman goes on to equate King Abgarus V with the Agabus in Acts of the Apostles (Acts 11:27-30), because Agabus was identified with the same famine relief as Queen Helena. By necessity Eisenman then equates the biblical Antioch Orontes with Antioch Edessa, indicating that Paul the Apostle and Barnabas went to Edessa.[14]

Authenticity of the Abgar documents and the letter of Jesus (2005)
Barbara Thiering
https://www.bibsonomy.org/bibtex/2a7325630bdc250160186992fa23f81e3/avs
Also on Yahoogroups discussions in email archives.

Yannick Clément on the Letters Between Jesus and King Abgar (2014)
https://shroudstory.com/2014/01/06/yannick-clment-on-the-letters-between-jesus-and-king-abgar/
(their authenticity was already questioned by Jerome and Augustine in the 4th-5th century, and was rejected by Decretum Gelasium as apocrypha) ... Eusebius asserts that the correspondence between Jesus and Abgar is genuine. Only later it has been discounted by Jerome and Augustine, on the basis that no authentic writings of the Savior would have been preserved in the Apostolic Church.

The Tradition of the Image of Edessa (2016)
by Mark Guscin
https://books.google.com/books?id=wSX5DAAAQBAJ&pg=PA10

A Man for the Times: Jesus and the Abgar Correspondence in Eusebius of Caesarea's Ecclesiastical History *
James Corke-Webster

Tellingly, the story is found, neither in the 4th-cent. writings of Ephrem, who lived in Edessa for ten years near the end of his life (though there is an oblique reference to the city being blessed by the Son through the hand of his disciple), nor in the mid-6th-cent. Chronicle of Edessa, which drew on the town archives in which the Abgar document was apparently stored. There is also no material record of Christianity for 2nd- or 3rd-cents. Syria. See Brock, Sebastian, “Eusebius and Syriac Christianity,” in Eusebius, Christianity and Judaism (ed. Attridge, Harold and Hata, Gohei; Detroit: Wayne State University Press, 1992) 212–34, at 221–29 Google Scholar.
Click to expand...

Is the Legend True? Did Jesus Write a Letter to King Abgar ? (2018)
Thomas L. McDonald -
https://www.ncregister.com/blog/is-the-legend-true-did-jesus-write-a-letter-to-king-abgar

Do We Have Any of Jesus' Writings? (The Answer May Surprise You!) (2021)
Bart Ehrman
https://ehrmanblog.org/do-we-have-any-of-jesus-writings-the-answer-may-surprise-you/

This tends to be a more hostile to Christianity bibliography, Walter Bauer and Han Drijvers (not here) are, in a Andrew S. Jacobs review of Mirkovics, placing the letter as orthodox propaganda.

Enslin, M.S. “Abgarus, Epistles of Christ and,” in Interpreter’s Dictionary of the Bible, Vol. I, 5. New York and Nashville: Abingdon Press, 1962.