PBF
"Accents are not found in MSS. older than the 8th century."
https://www.purebibleforum.com/inde...-found-in-mss-older-than-the-8th-century.650/

PBF
Hermas black ink accents - trying to parse the text
https://www.purebibleforum.com/inde...ack-ink-accents-trying-to-parse-the-text.474/
"Review the retracing - special emphasis on oddball Hermas accent area"
Uspensky
"Above the words, there are no breathings and accents and words are not separated by any punctuation (pronunciation symbol) above the letter) except for points"

Scrivener
"The various corrections the primitive text has undergone from ten or more different hands, with inks of many various shades, in different ages, yet nearly all before breathings and accents came into common use, "

The inverse relationship showing late dates comes up elsewhere. One interesting study has to do with accents and breathings that would not be 4th century, and afaik have never been studied for palaeographic dating purposes. See the clumsy markings at the beginnings of Hermas. Yet these types of markings are ascribed to one of the scribes, when they could easily be a clumsy attempt in the 1840s, by some one weak in Greek like Tischendorf, to mark and identify the text of Hermas. (Some accents are said to be in the beginning of Matthew, yet the ones in Hermas are especially clumsy, "Hermas, (the first sixteen lines of which he has defaced by coarse breathings and accents)." Scrivener, Full Collation p. 25.

CARM and BCHF discussions on the Hermas and Barnabas linguistics
https://www.purebibleforum.com/inde...hermas-and-barnabas-linguistics.496/#post-988

Assessing the Stability of the Transmitted Texts of the New Testament and the Shepherd of Hermas (2011) in:
The Textual Reliability of the New Testament: Bart D. Ehrman and Daniel Wallace in Dialogue,
https://www.academia.edu/6060500/_A...ewart_Minneapolis_Fortress_Press_2011_125_159
German (2009)
https://www.academia.edu/2177367/_Labilität_und_Festigkeit_des_überlieferten_Textes_des_Neuen_Testaments_und_des_Pastor_Hermae_demonstriert_an_wichtigen_Textzeugen_in_Sacra_Scripta_VII_2009_65_97
Despite its ugly appearance, hardly recognisable accents,60 frequent inconsistency in thought and other scribal blunders, the Codex Athous provides a text, from which the Sinaiticus varies in small details but apparently not in substance,61 and has solely managed to preserve the correct text at certain places.62 Similar can be said of the Codex Lavra K96. 63. ...
Click to expand...

PBF
Quire 93 - Folio 7 - where Hermas was mangled and folio was taken by both Uspensky and Tischendorf
https://www.purebibleforum.com/inde...s-taken-by-both-uspensky-and-tischendorf.153/

Hugh Houghton
The allocation of page numbers also showed that the fragment of the Shepherd of Hermas (Quire 93 Folio 7; NLR, Greek 843) is part of the same folio as the final page held by the British Library. These digital images taken in libraries hundreds of miles apart were assembled as a composite page by Rosalind MacLachlan (see Figure 6). Much of the text on this folio appears as a correction, because a later hand (Corrector d) with a darker ink has added accents to the unaccented text of the first hand: the accented form is shown in the pop-up boxes. At the top of the third column of the verso, an editorial note is supplied in a mouseover box (indicated by the symbol §), explaining that as the initial letters of each line do not always match known forms of the Shepherd of Hermas the rest of the line has not been reconstructed.
https://codexsinaiticus.org/en/manu...lioNo=7&lid=en&quireNo=93&side=r&zoomSlider=0

On the recto of this fragment (see Figure 7), there is an example of the paragraph symbol in the second line alongside the title of the third section. This is treated as a marginal annotation, and is therefore located within the opening line-break in order to display it within the margin. However, this coincides with the start of a new verse... p. 45-46
https://codexsinaiticus.org/en/manuscript.aspx?folioNo=7&lid=en&quireNo=93&side=r&zoomSlider=0
Click to expand...

PBF
Sinaiticus through the centuries in the 4th century paradigm
https://www.purebibleforum.com/inde...he-centuries-in-the-4th-century-paradigm.137/

PBF
Codex Zacynthius - a help in dating Codex Vaticanus?
https://www.purebibleforum.com/inde...ynthius-a-help-in-dating-codex-vaticanus.655/
The minuscule 579 is dated to the 13th century.
Yet the strange section in the beginning of Sinaiticus Matthew, that includes accents and the OT prophecy book references, and really appears to be more 1800s than 300s, also was bringing in these sections, maybe from Vaticanus or 579?

PBF
Johann David Michaelis and the dating of Codex Alexandrinus
https://www.purebibleforum.com/inde...lis-and-the-dating-of-codex-alexandrinus.919/
Michaelis on Alexandrinus
Introduction to the New Testament (1823 English edition, from the German c. 1780)
Johann David Michaelis
https://books.google.com/books?id=Kis-AAAAYAAJ&pg=PA188
"It is written with uncial letters, without marks of aspiration, accents, or intervals between the words. This shews its high antiquity, and that it was not written so late as the tenth century, which some of its adversaries have asserted. p. 188"

Did Tischendorf include accents in his facsimiles?
Matthew especially

Rohan Meyer on Skype
another glaring one that I am working with David on is the accents and breathings and OT refs and paragraphii in Matthew
that apparently are an original scribe, and the fact that this is anachronistic is ignored
they handle the accents in Hermas by making "Corrector D" medieval, but for certain reasons they cant do that in Matthew
the accents in Hermas might have been Tischendorf trying to figure out the text
they are in two spots
In early Matthew, The scribe tried to add in OT references. And got three of them wrong!

Accents and Breathings on Codex Vaticanus

The current theory, from

John Wiliiam Burgon (1862)
Burgon's Letters from Rome (review)
http://books.google.com/books?id=dBsEAAAAQAAJ&pg=PA158
"The MS. as it stands, is not however of that antiquity, for the accentuation belongs to a much later age. It appears that when the original ink began to grow pale, a careful scribe went through the whole MS. a second time, inking over the work of the first transcriber. The scribe moreover was a critic too; he added the accents, omitted to ink over words or letters which he rejected as corrupt, and inserted his emendations over the line...."
Click to expand...

F. H A. Scrivener (1867)
http://books.google.com/books?id=2_UDAAAAQAAJ&pg=PA412
"... Codex Vaticanus arises from the fact that its fading letters were retraced and furnished with breathings and accents by a scribe of the tenth or eleventh century in coarser ink and with no great care..."
Click to expand...

to today, is that any accents or breathings in Vaticanus are part of the later overwrite. This retracing, or reinforcement, has been theorized to dates like 11th century and 15th century,

"In fact, the pseudofacsimile is even more authentic than Codex Vaticanus with respect to the absence of accents/diacritics, which were added by a later hand and not in the original fourth-century manuscript."
Click to expand...

SIDENOTE:
In fact, some have theorized accents being even later, based on the variance in textual reports.

Principles of Textual Criticism: With Their Application to the Old and New Testaments; Illustrated with Plates and Facsimiles of Biblical Documents,
John Scott Porter
https://books.google.com/books?id=eMHORkWbDJUC&pg=PA278
“it is obvious that so far from having been as old as the MS. they must have been inserted within the last hundred and fifty years."

A follow-up on Johann David Michaelis and others.
This has a great difficulty where the accents ink matches overwriting ink.

Please look at this pic below from Matthew 22:44.

Now, there does seem to be a couple of markings that may be in a darker ink. However a number of markings look exactly like the original apricot color text, and there really does not seem to be an overwriting in the section.

Please correct me if you think otherwise.
Does this mean that the original Vaticanus had accents?
Does this affect the dating of the ms.?

Hi David, in general I do not see this section as over-written. for two reasons.

1) the color is the lighter apricot color

2) it does not look overwritten

Payne and Canart are only talking about dots in the margins. So there is a similarity in the argumentation but their claim could be true even if there were no accents in the text. (They claim that 51 spots of margin dots actually match the older ink, and you simply do not know about the possibility of original dots where the text is overwritten. Although spectrographic analysis could likely answer that question.)

And I am not taking any position on their theory of the dots indicating textual variants, other than pointing out dots by the earthly witnesses verse in 1 John 5, which may indicate that Greek mss. Had the heavenly witnesses verse, consistent with Jerome’s Vulgate Prologue and other evidences.

For comparison, here we see some overwritten text spots from a 2017 Philip Payne paper.

335. In the fac-simile published by Blanchini, are neither accents nor marks of aspiration, and Montfaucon, in his Bibliotheca bibliothecarum, Tom. I. p. 3. describes it Codex Bibliorum Græce, charactere unciali et rotundo, fine accentibus, quinti, sextive sæculi. But Birch, who has very carefully examined this manuscript, expressly declares that it has both. Accentus et spiritus quorum ultimi antiquam servant figuram, ab ipsa prima manu literis sunt impositi, quod Blanchinus adnotare, neglexit. This indeed is no absolute proof against its antiquity, for on a wall in the ruins of Herculaneum was found a verse of Euripides, written with accents. See Le pitture antiche d'Ercolano, Tom. II. p. 34. But, though accents were used by grammarians in the first century, and indeed some time before the Birth of Christ, yet they do not appear to have been introduced into manuscripts of the Greek Testament in general before the seventh century. The most ancient manuscripts of the Greek Testament in uncial letters, and with accents, which Montfaucon has described in his Palæographia are the Claromontanus, and Sangermanensis; in which accents and spirits are written precisely of the same form, as those which, according to Birch, are in the Vaticanus. See the Palæogr. p. 216, 219. Moreover, they are only a secunda manu in the Claromontanus, though a prima manu in the Sangermanensis. Now as Birch expressly declares that these marks are a prima manu in the Vaticanus, we might conclude, if we had no other data, that it was not written before the seventh century, On the other hand, though they were not in common use before the seventh century, they were sometimes used in manuscripts of the Greek Testament, even in the fifth century: for Euthalius, who lived in the fifth century, published an edition of St. Paul's epiftles, with accents. See Wetstein's Prolegomena, P. 73
Click to expand...

SIDENOTE:
In fact, some have theorized accents being even later, based on the variance in textual reports.

Principles of Textual Criticism: With Their Application to the Old and New Testaments; Illustrated with Plates and Facsimiles of Biblical Documents,
John Scott Porter
https://books.google.com/books?id=eMHORkWbDJUC&pg=PA278
“it is obvious that so far from having been as old as the MS. they must have been inserted within the last hundred and fifty years."

A follow-up on Johann David Michaelis and others.
This has a great difficulty where the accents ink matches overwriting ink.

The accents and marks of punctuation are additions probably by the hand which retouched the writing. 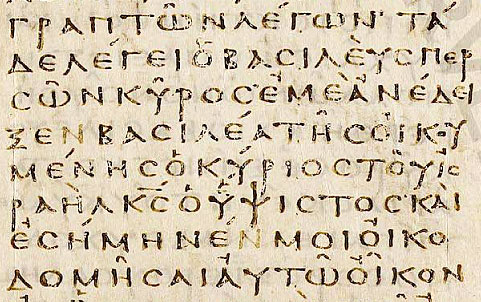 The text is written in scriptio continua with three columns per page. This is an unusual number. The ink of the text has been retraced carefully and accents have been added, probably in the 10th or 11th CE (Skeat 1999: "before the ninth"). Original (brown) ink can still be seen at many instances (dittographies, moveable-Nu etc.).

A single scribe seems to have been responsible for the New Testament, though two scribes worked on the Old. There were two primary correctors, though the dates of both are rather uncertain. The first is tentatively dated to the sixth century; the second comes from the tenth or eleventh. The second of these is much the more important, though more for damage done than for the actual readings supplied. This scribe, finding the manuscript somewhat faded, proceeded to re-ink the entire text (except for a few passages which he considered inauthentic). This scribe also added accents and breathings. This re-inking had several side effects, all of them (from our standpoint) bad. First, it defaced the appearance of the letters, making it much harder to do paleographic work. Second, it rendered some of the readings of the original text impossible to reconstruct. And third (though related to the preceding), it makes it very difficult to tell if there are any original accents, breathings, punctuation, etc. Such marks will generally disappear under the re-inking. Only when such a mark has not been re-inked can we be sure it came from the original hand.