Although answers to many questions about the life, writings, travels, places of residence – even the birth date – of Albertus Magnus are uncertain, his preeminence in medieval Latin European culture is beyond dispute. In the words of Lynn Thorndike, Albertus was “the most prolific of its writers, the most influential of its teachers, the dean of its scholars, the one learned man of the twelfth and thirteenth centuries to be called ‘the Great’” (HMES 2:521). Born in Swabia in Germany, Albertus achieved distinction as a member of the Dominican order and holder of high ecclesiastical offices, such as the bishopric of Ratisbon, 1260-62. His greatest fame, however, resulted from studies in most of the known fields of learning, which, following the plan of his master Aristotle, included physics, psychology, celestial phenomena, geography, botany, zoology, minerals, medicine, and optics, as well as theology. Only in the last of these was he exceeded by his pupil, Thomas Aquinas.

Albertus's writings on the “occult” arts of alchemy, astrology, and magic are often regarded as spurious, and it is difficult to separate the genuine from the false. The Libellus de Alchimia, from which the following selections are taken, is as likely to be authentic as any of the alchemical attributions and provides an excellent overview of the art in the early medieval period. It is also remarkable for its avoidance of the obscure rhetoric that plagues so much medieval and early modern alchemical writing. For these reasons, the brief tract enjoyed wide circulation in manuscript.

In a similar fashion, the author of the Libellus de alchimia reveals the Christian God and the grace of the Holy Spirit as the source of alchemical knowledge: Albertus Magnus, Libellus, 1–2.

Aurora Consurgens is an alchemical treatise; a commentary on the Latin translation of Silvery Waters by Muhammed ibn Umail at-Tamîmî (Senior Zadith), attributed first to Saint Thomas Aquinas and later attributed to “Pseudo-Aquinas”.

The Aurora author reconciles the monistic philosophy found in alchemy (“spirit, soul, and body are one and all things are of one”) with medieval Christian doctrine, declaring that “Like as the Father is, so is the Son, and so also is the Holy Spirit, and these three are One, [which the Philosopher would have to be] body, spirit, and soul, for all perfection consists in the number three, that is, in measure, number, and weight.”93

Albertus Magnus (d. 1280 AD)
• Albertus Magnus[6] (before 1200 – November 15, 1280), also known as Saint Albert the Great and Albert of Cologne,
was a German Catholic Dominican friar and bishop. Later canonised as a Catholic saint, he was known during his lifetime
as Doctor universalis and Doctor expertus and, late in his life, the sobriquet Magnus was appended to his name.[7]
Scholars such as James A. Weisheipl and Joachim R. Söder have referred to him as the greatest German philosopher
and theologian of the Middle Ages.[8] The Catholic Church distinguishes him as one of the 36 Doctors of the Church.
• Albert was probably educated principally at the University of Padua, where he received instruction in Aristotle's writings.
A late account by Rudolph de Novamagia refers to Albertus' encounter with the Blessed Virgin Mary, who convinced him
to enter Holy Orders. In 1223 (or 1229)[10] he became a member of the Dominican Order, and studied theology at
Bologna and elsewhere. Selected to fill the position of lecturer at Cologne, Germany, where the Dominicans had a house,
he taught for several years there, as well as in Regensburg, Freiburg, Strasbourg, and Hildesheim. During his first tenure
as lecturer at Cologne, Albert wrote his Summa de bono after discussion with Philip the Chancellor concerning the
transcendental properties of being.[11] In 1245, Albert became master of theology under Gueric of Saint-Quentin, the first
German Dominican to achieve this distinction. Following this turn of events, Albert was able to teach theology at the
University of Paris as a full-time professor, holding the seat of the Chair of Theology at the College of St. James.[11][12]
During this time Thomas Aquinas began to study under Albertus.[13]

• Albert was the first to comment on virtually all of the writings of Aristotle, thus making them accessible to wider academic
debate. The study of Aristotle brought him to study and comment on the teachings of Muslim academics, notably
Avicenna and Averroes, and this would bring him into the heart of academic debate. In 1254 Albert was made provincial
of the Dominican Order,[13] and fulfilled the duties of the office with great care and efficiency. During his tenure he
publicly defended the Dominicans against attacks by the secular and regular faculty of the University of Paris, commented
on John the Evangelist, and answered what he perceived as errors of the Islamic philosopher Averroes. In 1259 Albert
took part in the General Chapter of the Dominicans at Valenciennes together with Thomas Aquinas, masters Bonushomo
Britto,[14] Florentius,[15] and Peter (later Pope Innocent V) establishing a ratio studiorum or program of studies for the
Dominicans[16] that featured the study of philosophy as an innovation for those not sufficiently trained to study theology.
This innovation initiated the tradition of Dominican scholastic philosophy put into practice, for example, in 1265 at the
Order's studium provinciale at the convent of Santa Sabina in Rome, out of which would develop the Pontifical University
of Saint Thomas Aquinas, the”Angelicum".[17]

• In 1260 Pope Alexander IV made him bishop of Regensburg, an office from which he resigned after three years. During
the exercise of his duties he enhanced his reputation for humility by refusing to ride a horse, in accord with the dictates of
the Order, instead traversing his huge diocese on foot. This earned him the affectionate sobriquet”boots the bishop”from
his parishioners. In 1263 Pope Urban IV relieved him of the duties of bishop and asked him to preach the eighth Crusade
in German-speaking countries.[18] After this, he was especially known for acting as a mediator between conflicting
parties. In Cologne he is not only known for being the founder of Germany's oldest university there, but also for”the big
verdict”(der Große Schied) of 1258, which brought an end to the conflict between the citizens of Cologne and the
archbishop. Among the last of his labors was the defense of the orthodoxy of his former pupil, Thomas Aquinas, whose
death in 1274 grieved Albert (the story that he travelled to Paris in person to defend the teachings of Aquinas can not be
confirmed). Albert was a scientist, philosopher, astrologer, theologian, spiritual writer, ecumenist, and diplomat. Under the
auspices of Humbert of Romans, Albert molded the curriculum of studies for all Dominican students, introduced Aristotle
to the classroom and probed the work of Neoplatonists, such as Plotinus. Indeed, it was the thirty years of work done by
Aquinas and himself that allowed for the inclusion of Aristotelian study in the curriculum of Dominican schools.
• After suffering a collapse of health in 1278, he died on November 15, 1280, in the Dominican convent in Cologne,
• Albertus Magnus. Wikipedia. <en.wikipedia.org/wiki/Albertus_Magnus>.
http://en.wikipedia.org/wiki/Albertus_Magnus

HIT:
● [Art. VI.] An inquiry is made into the question: what is ”three” and what is ”three things"? For it seems that the question was about nothing else than the essence: since the hypostases were certainly being assumed with their properties in John's words when he said ”The Father, the Word, and the Holy Spirit”(1 John 5:7), the question was not about those. Therefore, since there is nothing else left in the persons except the essence, it seems that the question was about the essence. On the other hand, however, the essence was also certainly being assumed in John's words when he said: ”And these three are one”(1 John 5:7) : therefore it seems that there was nothing to inquire about, and thus the inquiry was useless.
(Albertus Magnus, I Sentent. Dist. XXV, F. Art. VI, Opera omnia. vol 25, 1890, p. 634-635; Translated by Sara Van der Pas, linkedin, August 2020)

TWOGIG can use the first part here, it has the later part. 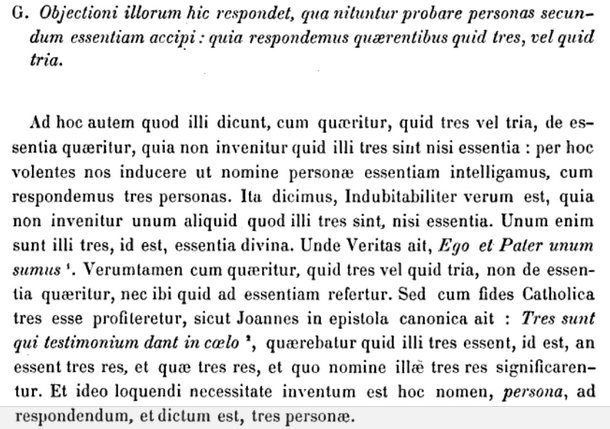 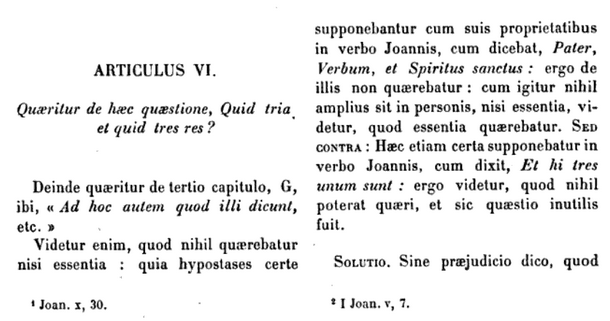