We find that the expression ‘ who is over all [things], God blessed for ever * is expressly acknowledged to refer to our Saviour by the following 60 illustrious names:— ... Augustine, about 30 times ... All these see in Rom. ix. 5, a glorious assertion of the eternal GODhead of Christ.

Is this reliable?
Most of the quotes do not have pizazz, maybe the Confessions.

https://www.newadvent.org/fathers/140603.htm
Adoption, we know, was familiar to the ancients; for even women adopted the children of other women, as Sarah adopted Ishmael, and Leah her handmaid's son, and Pharaoh's daughter Moses. Jacob, too, adopted his grandsons, the children of Joseph. Moreover, the word adoption is of great importance in the system of our faith, as is seen from the apostolic writings. For the Apostle Paul, speaking of the advantages of the Jews, says: "Whose are the adoption, and the glory, and the covenants, and the giving of the law; whose are the fathers, and of whom, according to the flesh, Christ came, who is over all, God blessed forever." 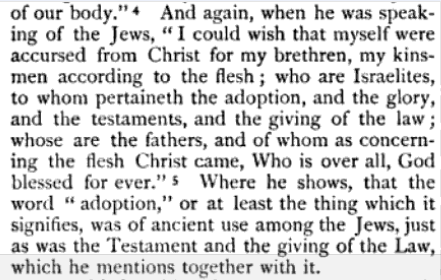 Check for more here. there are about 17, some will be nothings.

26) Psalm LXVIII
2. “Let God rise up, and let His enemies be scattered” Already this hath come to pass, Christ hath risen up, “who is over all things, God blessed for ever,” and His enemies have been dispersed through all nations, to wit, the Jews; in that very place, where they practised their enmities, being overthrown in war, and thence through all places dispersed: and now they hate, but fear,

27) Psalm LXXI
So then did God forsake Christ, though “God was in Christ reconciling the world to Himself,” though Christ was also God, out of the Jews indeed according to the flesh, “Who is over all things, God blessed for ever,” —did God forsake Him?

28) Psalm LXXVI
For better were it for them that their king should be Christ, of the seed of David, of the tribe of Judah. Nevertheless because Christ Himself is of the seed of David after the flesh, but God above all things blessed for ever, He is Himself our King and our God; our King, inasmuch as born of the tribe of Judah, after the flesh, was Christ the Lord, the Saviour; but our God, who is before Judah, and before Heaven and earth, by whom were made all things, both spiritual and corporal. For if all things by Himself were made; even Mary herself, out of whom He was born, by Himself was made.
Last edited: Nov 26, 2021

Homily I.
1 John I. 1–II. 11
For what thing did He come, or what new thing did He tell us? What was it His will to teach? Wherefore did He this which He did, that the Word should be made flesh, that “God over all things” 2008 should suffer indignities from men, that He should endure to be smitten upon the face by the hands which Himself had made?
https://www.ccel.org/ccel/schaff/npnf107.iv.iv.html

Aug. constantly refers this clause to Christ. So