Coislinianus colophon - an exemplar for Sinaiticus?

A Note from earlier


Steven Avery said:
These colophon notes are similar to extant notes in other known manuscripts. such as Codex Coislinianus, a manuscript about which Tischendorf had published in 1842. So it would be very simple to use one existing note as an exemplar, knowing that they add a lustre of age.
Click to expand...

2) Codex Sinaiticus has links with the sixth century manuscript 015 (HPaul). 015 at the end of Paul notes that this manuscript too was corrected against the copy (in Caesarea) of the manuscript used by Pamphilus.
Click to expand...

And this is just what we do learn from the colophon which in Armenian MSS of the Paulines, as also in codex H of Paul, follows the Epistle to Philemon:

“I have written out and arranged as far as I could verse by verse the writings of Paul the apostle, disposing them also in easily understood lections for our brethren .... This book was copied after an exemplar of Caesarea, which lies there in the chest of books, and which was written with his own hand by the holy Pamphilus.”

In the Journal of Philology Vol. 23 in an article “on the codex Pamphili and date of Eusebius” I argued that this colophon must be of the same writer, Euthalius or not, who wrote the prologues, because it agrees with them in style and contents. There is a similar colophon at the end of the Catholic epistles. These two colophons are first rate evidence that the author of the argumenta did visit Caesarea. ...
Click to expand...

From Constantinople to the Frontier: The City and the Cities (2005)
Jeremiah Coogan
https://books.google.com/books?id=Hi5RDAAAQBAJ&pg=PA298

For this project, the corpus of evidence is the dated Greek colophons up to the year ad 1200, a total of some 401 manuscripts. While earlier colophons, such as those in Codex Sinaiticus and Codex Coislinianus, offer tantalizing clues about the role of Pamphilus, Origen, and the library of Caesarea Maritima in the manuscript transmission of Late Antiquity, the limited evidence from these colophons remains essentially anecdotal.3

3 Among others, see
Andrew J. Carriker, The Library of Eusebius of Caesarea (Leiden, 2003);

Anthony Grafton and Megan Williams, Christianity and the Transformation of the Book: Origen, Eusebius, and the Library of Caesarea (Cambridge, Mass., 2006).

“I wrote and set out (this book) according to the copy in Caesarea of the library of the holy Pamphilus.” In some manuscripts is added: “ written by his hand,”

showing that he himself had shared in the work of writing biblical manuscripts. Such subscriptions are found not only in Greek, but also in Syrian manuscripts.
Click to expand...

https://books.google.com/books?id=FbpCAAAAIAAJ&pg=PA338
It will be remembered that Eusebius’ Pamphilus was named some distance back, and his library at Caesarea. At the end of the book of Esther is a subscription which refers to the comparison and correction of this manuscript with a manuscript of Pamphilus’, which is called “ very old.” Adolf Hilgenfeld in Jena found that this manuscript was much too badly, too incorrectly, written to be of the fourth century, and he declared that if this manuscript and its corrector looked up to a manuscript of Pamphilus’—Pamphilus died in the year 309—as very old, it could not possibly itself be of the fourth, but must be of the sixth century. In urging this latter argument, Hilgenfeld overlooked the fact that that subscription to Esther was probably written as late as the seventh century, at which time the corrector might well call Pamphilus’ manuscript very old. And as for the incorrect writing, Hilgenfeld regarded the Vatican manuscript as of the fourth century, and it was as bad as the Sinaitic. Dean Burgon, of Chichester, named a number of points which seemed to him to make the Sinaitic appear to be surely younger than the Vatican, whether fifty or seventy-five or a hundred years. But Ezra Abbot, of Harvard, showed that the reasons given were either founded upon imperfect observation, or were of no weight for the proof of the dating desired by the dean. A palaeographer, Victor Gardthausen, of Leipzig, stated that the forms of the letters found in the Sinaitic manuscript showed that it had been written about the year 400: and he urged in support of this statement particularly a few words written with a brush on the wall of a celL To this it may be freely acknowledged, that if there were good reasons for thinking that the Sinaitic manuscript was written in the year 400, the forms of the letters would scarcely place any bar in the way. But the reasons seem to point to an earlier date, and the letters offer no bar to that. It may, in fact, be asserted that all the palaeographical material that we to-day have in hand does not allow us to distinguish definitely between forms of letters possible in 331 and forms possible in 400. And,
Click to expand...

finally, it is really not easy to comprehend how a palaeographer can for a moment entertain the thought of comparing the forms used by a scribe writing with a fine pen on good parchment for a good copy of a sacred book, with the forms dashed with a brush on the wall of a cell.
Click to expand...

https://books.google.com/books?id=FbpCAAAAIAAJ&pg=PA367
H
They contain fragments from a number of the Epistles of Paul, including Hebrews. These leaves are, I think, the oldest, aside from that subscription to Esther in the Codex Sinaiticus, that carry us back to the great library of Pamphilus at Caesarea of which we have spoken more than once. Indeed, if Tischendorf was right in dating that subscription as of the seventh century, and if we are right in thinking that this manuscript is of the sixth century, it was written before that collation was made. Henri Omont published the forty-one leaves. But strange as it may seem, there is something more to tell. Omont published one more page than the eighty-two pages, and J. Armitage Robinson and H. S. Cronin published that one more and fifteen more in addition, and yet no more leaves had been found. The secret was that these sixteen pages had printed themselves off on various of the forty-one leaves, and were now with great pains reproduced as though from the thin air by those scholars.
Click to expand...

2. A new impetus was given to the study of the Euthalian question, when M. EL Omont’ published a complete transcription, together with two pages of facsimile, of the scanty remains of the Greek Codex H of the Pauline Epistles, whose 41 leaves are scattered in the libraries of Paris, Mt Athos, Moscow, S. Petersburg, Kieflf and Turin 2. M. Omont refers the codex to the second half of the fifth or to the sixth century, and connects it with the Euthalian edition of these Epistles on the ground of the distribution of its text (Greek). By a strange good fortune the leaf which contains the colophon at the end of the Pauline Epistles is preserved in the Bibliothbque Nationale, and of its recto M. Omont has given us a photographic reproduction. This colophon is so important to our subject that I must give it in full, only dividing the words and using minuscules for greater clearness.

2 The Biblioth&que Nationale at Paria contains 24 of these leaves, and with them may be seen photographs of the leaves preserved in the other libraries, with the exception of those still at Mt Atbos. 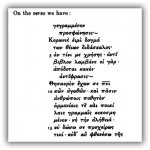 This colophon, then, tells us that the codex to which it applies was compared with, that is, corrected by, a codex which was written hy Pamphilns, the famous friend of Eusebius, and was preserved at the time in question in the library of Caesarea. It does not in the least follow that Codex H itself was the manuscript so compared and corrected. Colophons of this kind are frequently copied by scribes from one manuscript into another. I have given an example of this in my edition of the Philocalia of Origen (p. xxviii). The ms of Origen contra Celsum from which all other known mss are taken contains the following colophon: (Greek) But that codex cannot be earlier than the 13th century. Moreover the same words are reproduced in copies taken from it in the 14th and 16 th centuries.
(continues)

We shall have to return to this colophon and its interesting appendices later on. p 2
Click to expand... 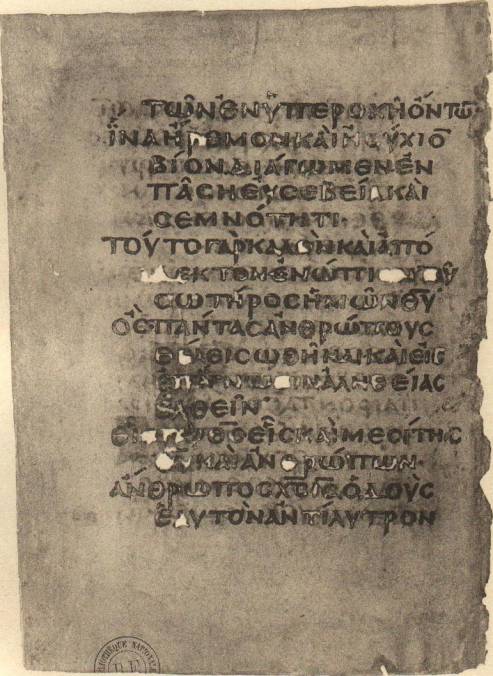 I, Euthalius, wrote this volume of the Apostle Paul as carefully as possible in stichoi, so that it might be read with intelligence: the book was compared with the copy in the library at Caesarea, written by the hand of Pamphilius the saint.