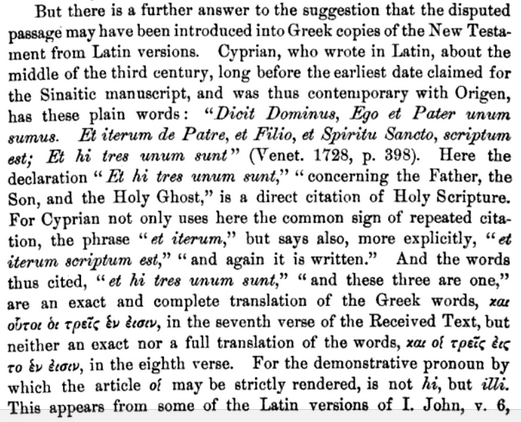 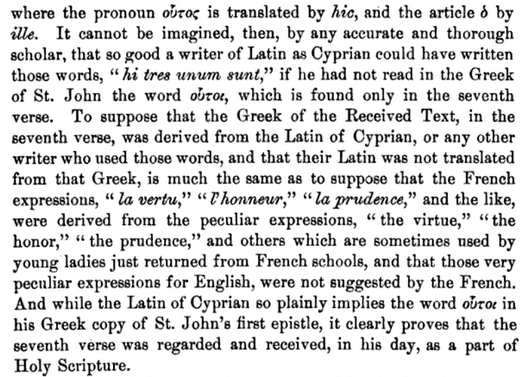 CARM discussion of the above Cornwall section.
https://forums.carm.org/threads/ecfs-and-the-trinity.11135/page-4#post-865530


cjab said:
Also you have much bizarre argument from Nathaniel Ellsworth Cornwall on the Cyprian quote on your page that seems pointless, given that the D-R Vulgate version of the text contains "hi" in both 1 John 5:7 and 1 John 5:8.
Click to expand...

What is bizarre is your counter.

First, the Douay-Rheims is an English text. Its source textual history is complicated, as the Sixtene and Clementine Vulgate editions came out after the first edition of the D-R New Testament. There were D-R updates to match those newer Latin versions, it is unclear if the original D-R and the later updated versions are the same at 1 John 5:7-8. The Harvard–Dumbarton Oaks Vulgate includes the attempt at a Latin reconstruction in part from the early D-R edition. While the Sixtene and Clementine editions would be good to check directly, as well as the later Challoner Revision.

Wikipedia on this English revision

The Sixtine Vulgate edition was published in 1590. The definitive Clementine text followed in 1592. Worthington, responsible for many of the annotations for the 1609 and 1610 volumes, states in the preface: "we have again conferred this English translation and conformed it to the most perfect Latin Edition."[6
6 Bernard Orchard, A Catholic Commentary on Holy Scripture, (Thomas Nelson & Sons, 1951). Page 36.
Click to expand...

The Catholic translation history of this last phrase in the earthly witnesses was subject to great confusion. Starting with Joachim Fiores and the attack by Peter Lombard on his unusual Trinitarian views, then the truncating of the verse at the Lateran Council, and Thomas Aquinas saying the last phrase was added by Arians. Then there was still truncation at Codex Ottobonianus, Joseph Bryennius, Codex Montfortianus and the verse is still mangled in the Complutensian Polyglot and the Antwerp Polyglot (words placed in the margin) and various Latin Bibles.

Thus whatever was done by the Douay-Rheims and its sources is at best hit and miss.