When we come to apply this classification to our extant authorities, the African family can be tested and identified by reference to the Biblical quotations in the African Fathers; not so much Tertullian, who seems habitually to have made his own translations direct from the Greek, as Cyprian, who quotes copiously and textually.

Tertullian’s regular practice was to use the Greek original and to translate for himself. But, in addition to his actual mention of existing Latin translations, it is clear that he sometimes used them himself. A study of his quotations by Monceaux has shown that he must have possessed translations of Luke, John, Galatians, First Corinthians, Romans and Ephesians. The existence of a (relatively) complete New Testament in Africa first comes into clear view in the writings of Cyprian (+ 258), who quotes a Latin Bible abundantly and accurately.
p. 35-36
Last edited: May 18, 2022


Which begs the question: how do you determine he quoted the Bible accurately at all if what he's quoting doesn't match the KJV?
Click to expand...

You go to scholars who have studied the particular issue.

In addition to the Kenyon quote, (this may have been the source for the Souter quote) accepted by Daniel Wallace as true, we have a longer section from Leonard Twells:

For to say, as some do, that the blessed Martyr here gives us only the mystical sense of the eighth verse, in which the Spirit, the Water and the Blood were explained of the Three Persons in the Trinity, is to ascribe an Interpretation to the Age of Cyprian, which probably was first invented by St. Austin, 150 Years after. Besides, granting this Exposition to have been as old as Cyprian, unless it lhall further appear by other instances, that he was wont to cite Exposition of Scripture, that were not in the Copies of his Time as Scripture, it cannot be deemed probable, that he has done fo in the Passage cited. But of all the Fathers Greek or Latin, no one is more remarkable for citing Scripture verbatim than Cyprian. It is therefore trifling in LeClerc, to conclude from Tertullian's and Optatus's lax Citations of Scripture, that no African Writer can be depended upon in that Respect. For it is not the Character of the Age, nor of the Country, that is to be attended to in such a Dispute, but the known Practice of the particular Writer in Question. And since in a case on which fo much depends, our Adversaries have not been able to produce so much as a single Instance, where St. Cyprian departs from the Letter of his Copy in citing Scripture, we may insist upon it, that the Words in Dispute were in some the African Exemplars, before the Middle of the third century. third Century. I add, that Cyprian's Manner of citing John 30. and 1 John v. 7 as it were with a Breath, greatly confirms us in the Belief, that when Tertullian has the same Expressions, one after another, he spake the Words of Scripture alike in both.

Henry Thomas Armfield, in many ways still the best writer on Cyprian and the heavenly witnesses, quotes from this excellent section: 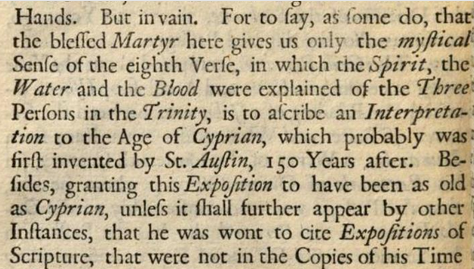 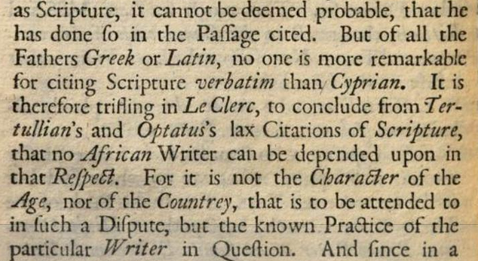