The first publication is here: 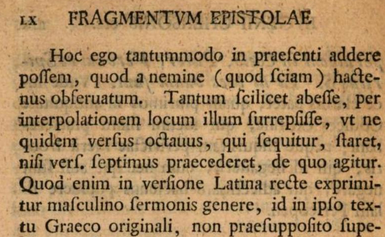 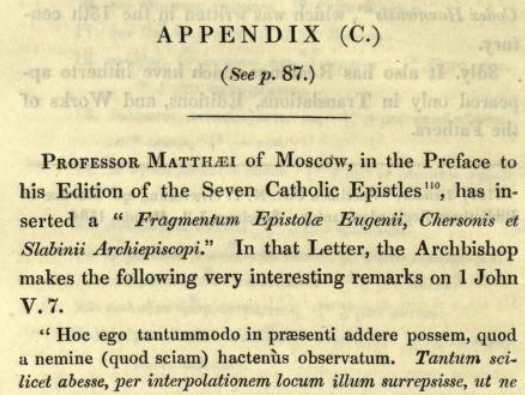 Christian Frederick Matthaei (1744–1811)
http://en.wikipedia.org/wiki/Christian_Frederick_Matthaei
Matthaei was a contra on the heavenly witnesses authenticity.
A bit of a pre-Tischendorf, accused of stealing mss.

Grantley McDonald omitted this primary, salient evidence in Raising the Ghost of Arius (perhaps because it was omitted by Martin Heide) his section in BCEME is worth reading, with a minor little Grantley flip. Overall, likely the best summary around. 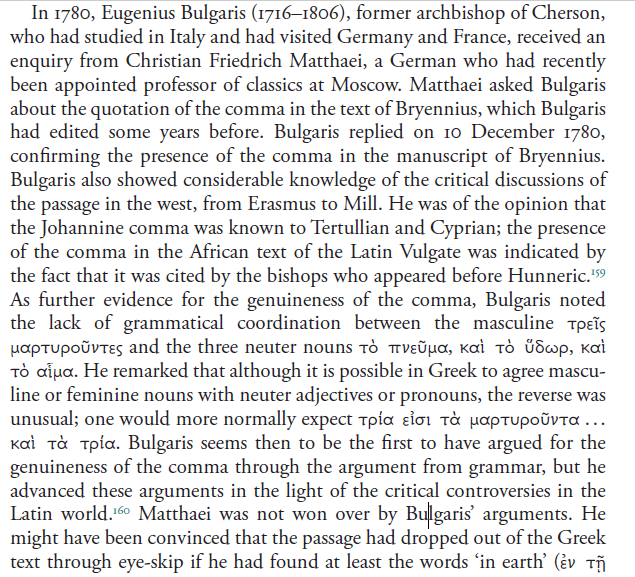 This, however, I am able to add here, something which, to my knowledge, has not been heretofore observed. Surely if the passage is absent, if it is secreted away through alteration, the result is that not even verse 8, which follows, would stand, unless verse 7 came first. It is this I wish to discuss. In the Latin version this is correctly expressed with the phrase in the masculine gender,(1) but in the original Greek text itself, if the prior verse is not there, it obviously by no means can stand without some violence to the syntax and through a most obvious solecism. Since τὸ πνεῦμα καὶ τὸ ὕδωρ καὶ τὸ αἷμα (the spirit and the water and the blood) are all neuter nouns, how will they agree with the preceding τρεῖς εἰσιν οἱ μαρτυροῦντες (there are three who give witness) and the following καὶ οὑτοι οἱ τρεῖς κ.τ.λ. (and these three, etc.)? It is very well known, since all have experience with it, and it is clearly a peculiar genius of our language, that masculine and feminine nouns may be construed with nouns, adjectives and pronouns in the neuter, with regard to the actual sense (τὰ πράγματα). On the other hand no one has ever claimed that neuter noun substantives are indicated by masculine or feminine adjectives or pronouns. However, we read as follows in the 8th verse: και τρεις εισιν οι μαρτυρουντες εν τη γη το πνευμα και το υδωρ και το αιμα και οι τρεις εις το εν εισι. But, I ask, wouldn’t the natural and appropriate syntax here rather be: και τρια εισιν τα μαρτυρουντα εν τη γη το πνευμα και το υδωρ και το αιμα και τα τρια εις το εν εισιν. But the former is written, not the latter. What reason can therefore be given for this failure to comply with the rule? It can only be the expression of the preceding 7th verse, which through the immediately following 8th verse is set forth symbolically and obviously restated, an allusion made to that which precedes. Therefore the three who give witness in heaven are first placed in the 7th verse, τρεις εισιν οι μαρτυρουντες εν τω ουρανω ο πατηρ ο λογος και το αγιον πνευμα και ουτοι οι τρεις εν εισιν. Then immediately the very same three witnesses are brought in, to confirm on earth the same witness, through these three symbols, in vs. 8: και τρεις εισιν οι μαρτυρουντες εν τη γη το πνευμα και το υδωρ και το αιμα και οι τρεις εις το εν εισιν. And so our Evangelist might say “They are the same as those giving witness in heaven.” (This is sufficiently indicated through the particle καί, the force of which here is not simply connective but plainly identifying. [At this point, Eugenius shifts to Greek] Concerning what was said in the text [perhaps = manuscript] above, clearly the Father, the Word and the Spirit. These are the ones giving witness also on the earth, and they are made manifest to us through symbols. These symbols are the spirit, through which the Father is revealed, the blood, through which the Son is revealed, and the water, through which the Holy Spirit is revealed. But these three, who above by way of revelation through the divine names themselves are presented as giving witness in heaven, are the same on earth through remembrance in the divine plan presented repeatedly by way of symbols. But alas! I have made a cup, not a jug.(2)_________ Poltaviae, ad d. 10 Decemb. 1780. 1) In the Latin text, spiritus and sanguis are both masculine, aqua feminine. Using the masculine in Latin of such a mixed gender list is common. 2) Urceum institui, non amphoram. Cf. Jerome Letter 107.3, Paene lapsus sum ad aliam materiam et currente rota, dum urceum facere cogito, amphoram finxit manus. This refers to shifting subject matter, so that the contrast is between the type of pottery, and not the size.

Eugenius Bulgaris on the solecism
https://www.purebibleforum.com/index.php?threads/eugenius-bulgaris-on-the-solecism.65/

Two samples discussing the Eugenius skill-set.
There is more discussion on the PBF Eugenius Bulgaris and the Solecism above. 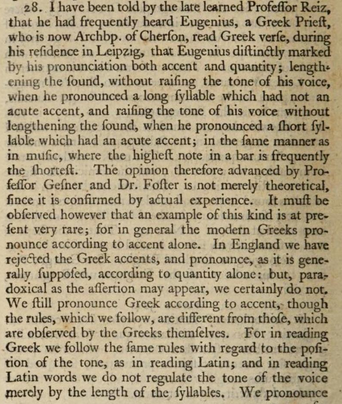 Exercises on the Syntax of the Greek Language (1834)
William Neilson
https://books.google.com/books?id=OmESAAAAIAAJ&pg=PA188 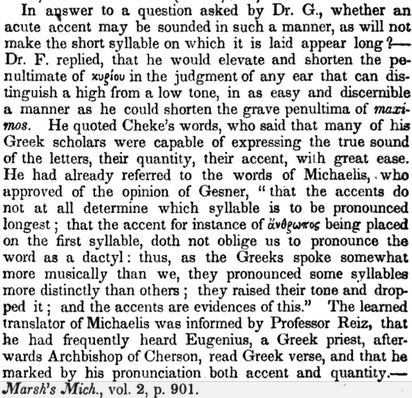