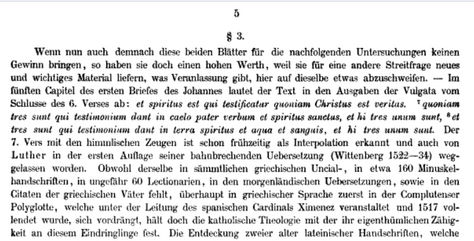 • [Ziegler] The fragments summarized ...in the catalog are not of the same age and value, but fall into three classes. Let's start with the less extensive ones. § 2. Pages 23 and 24, which contain 1 John 3, 8 up to the end of the letter, form a class. Both are related and once formed the middle layer of leaves of a Quaternio. About a third of sheet 24 has been cut away on the right side. The text is not divided into columns, but with the exception of small spaces only here and there marked with a dot to separate the stoichiometrically written lines of verse in the original without any division. The page comprises 32 lines, the line an average of 36 letters. The form of the uncial script, individual orthographic and grammatical peculiarities point to an old age, at the latest the seventh century? At the end of the letter is written in red:”....: CC.LXXIIII INCPEIUSDEM II".

• [Ziegler] The words in front of the numbers fell victim to the knife; after the small traces, the last letter seems to have been a ”O” with a slash. In addition to the usual Clause”I EXPL"“UERSUSNO”has to be added, so that the number of lines of verse in the stoichiometrically written original codex would be indicated. This peculiarity, as well as the shape of the letters, especially the already closed ”e", the round, tailed ”q” at the beginning of the lines, the more frequent use of abbreviations, the rarity of the interpuncuation, the smaller format, the quality of the parchment and the text itself, distinguish these Leaves very differently from the rest, with which they came together only by chance. The content is a translation made before Jerome, which differs from the citations of the Church Fathers as well as from the Vulgate, despite various echoes and agreement, even in important points.

• Ziegler, Fragments of the Versio Itala of the Epistles of Paul, with minute Portions of an Ante-Hieronymian Translation of the First Epistle of John, 1876, p. 4)

• [Fragmenta Frisingensia. Freising Fragments]
Volume / Number: 9 / 1286a; CLA 1286a; Script: Uncial; Date: VI² (551- 600); Origen and Provenance: Written possibly in Spain, to judge by certain palaeographical peculiarities, but possibly in Africa, to judge by the nature of the text and its relation to St Augustine. The leaves were taken from medieval bindings of books from the Freising cathedral library. The Göttweig leaf comes from a manuscript of the Commentarii Notarum Tironianarum acquired by Abbot Gotfried Bessel between 1742–1749.
<Fragmenta Frisingensia. Freising Fragments. Earlier Latin Manuscripts. <elmss.nuigalway.ie/catalogue/1778>)

• [Review] We welcome the addition which Ziegler has made to our scanty remains of it [the Itala] by the publication of these Fragments of the Pauline Epistles, and an important part of the First Epistle of John. We owe the recovery of these Fragments to a fortunate accident. Collections of ancient MSS. have suffered grievously at the hands of bookbinders, who, if they wanted a stout piece of parchment to stiffen their covers, found ancient membranæ excellent material for their purpose. And they are fixed by preference upon the oldest, as of least value. They have not always, however, been destructive; occasionally they have proved conservative. When in the course of years the book required to be re-bound, the scrap of parchment came again to light; and if it fortunately caught the eye of a paleographer and a scholar, its antiquity has been recognized, its obsolete writing read and construed, its disjointed portions re-united, and its lacunae ingeniously filled up. The carelessness of binders in placing together leaves belonging to different authors, has frequently led to the apprehension that a portion had been lost. Such as we have described has been the history of these Fragments of the Versio Itala. They have been recovered from a volume now in the royal library of Munich, and formerly belonging to an ecclesiastical institution at Freising, in Bavaria. The editor, Dr. Ziegler, calls them Fragments of the Versio Itala, by which he means ”antehieronymian", or anterior to the Vulgate of Jerome.

• [Review] What gives special interest to the discovery of the Freisinger Fragment is that it contains, after the Pauline Epistles and that to the Hebrews, a portion of the First Epistle of John, chap. iii. 8 to verse 9, just including the text of the Heavenly Witnesses. In the days when the contest among critics over this famous text still raged, what a sensation would have been occasioned by the discovery of a Latin MS., the text of which belonged to the period before the Vulgate, containing 1 John v. 7 ”in the primary hand” (Latin: a prima manu)! How would it have been hailed by the champions of orthodoxy as a providential event!

• [Review] Martin, a zealous defender of this text, who maintains that the Arians had cut [these verses] out of the Greek MSS. would have seen a special providence guiding the shears of the binder when he helped himself to the Freisinger MS. For it so happened that he took away one-half of the 7th, 8th and 9th verses, but left enough for the editor to supply with certainty the missing part. Restored, and contractions extended, it reads:

Besides the transposition of verses 7 and 8, the Freisinger Fragment varies from the Vulgate by having ”testificantur”for”testimonium dant” in the clause of the Heavenly Witnesses.

• [Review] The search for manuscripts which have preserved for us some remains of the old Latin versions of the Bible, prior to that of Saint Jerome, has excited, since Nobilius (1530-1590), the zeal of a great number of scholars. These first translations are in fact precious, not only for the history of the beginnings of the Church and for philological science, but also, and above all, for the criticism of the biblical text. ... Much has already been done in this field of science, but there is still more to be done. M. Léon Ziegler has just published an important work, which will, it is to be hoped, be followed by several others, intended to fill in part of the gaps which we have hitherto been reduced to needlessly deploring. He announces the publication of several parts of the Pentateuch of which he has discovered old versions. What he gives us today contains fragments of the epistles of Saint Paul belonging in a certain way to the famous version known properly under the name of Italic. Saint Augustine teaches us that, in his time, there were a large number of Latin translations of the Holy Scriptures, but that among them there is one, preferable to all the others, which he designates under the name of Italic. This name of italic has since been given to all the fragments of versions in the Latin language, prior to Saint Jerome, which have been discovered. In reality, and strictly speaking, this title belongs to only one. The comparison of the parts studied in the library of Munich, by M. Ziegler, with the quotations which one meets in the writings of Saint Augustine, establishes that we have surely for the first time fragments of the true Italic. These fragments come from Frisingensia, where the seat of the archdiocese used to be, transferred in 1818 to Munich. They are written on twenty-four sheets of parchment, which had been used to bind other books, and appear in the printed catalog of the manuscripts of this library under this heading: Clm. 6436 (Fris. 236 member in-4° s. VIII. 24 folia singula. S. Pauli epistolarum versionis antehieronymianæ fragmenta. Mr. Ziegler has published them with the greatest care.
(Polybiblion: Revue bibliographique universelle, November, 1876, XVII, 25, p. 385-386)

HIT:
● [1 John 5:6,8,7] This is he that came by water and blood, even Jesus Christ; not by water only, but by water and blood. And it is the Spirit that beareth witness, because the Spirit is truth. Because there are three that bear witness in earth, the spirit, and the water, and the blood: and these three agree in one. For there are three that bear record in heaven, the Father, the Word, and the Holy Ghost: and these three are one.

https://forums.carm.org/threads/1-j...llian-adversus-praxeas-25-1.11415/post-880078
(The Codex Fr(e)isingensis, written by Sigihard in Freising circa 902-906, was copied from Codex Vindobonensis (V), which itself was written in Weissenburg by four scribes in the last third of the 9th century, with some readings from Codex Palatinus, written in Weissenburg circa 870 (copied from V) by the same four scribes, with the introduction of some Bavarian forms. [source].
The earliest I have seen anyone attempt to date the text of Codex Fr(e)isingensis is circa 500AD.
https://en.wikipedia.org/wiki/Otfrid_of_Weissenburg#Manuscripts

BCEME p. 5
The first extant bibles containing the Johannine comma are Latin manuscripts copied in Spain during the seventh century: some fragments in Munich (BSB Clm 6436, the ‘Freising fragments’ = Vetus Latina 64) and a palimpsest in León (Archivo catedralicio ms 15 = Vetus Latina 67). These two fragmentary sources are closely related, and represent – at least in the Catholic Epistles – a Vetus Latina text resembling that used in the Spanish liturgy.7

Why omit this, from RGA

[Review] above
This has the English title used above.

The Theological Review: A Quarterly Journal of Religious Thought and Life, Volume 13 (1876)
https://books.google.com/books?id=6FyXD6Dj5qAC&pg=PA442