Here we have more specifics on the Glassius equivocation, where he even references three verses that are difficult for article theory. Thus later an exception was created for plurals. That is how the Sharp theory works, just keep adding on rules and exceptions.

Matthew 21:12 (AV)
And Jesus went into the temple of God,
and cast out all them that sold and bought in the temple,
and overthrew the tables of the moneychangers,
and the seats of them that sold doves,

Luke 19:45 (AV)
And he went into the temple,
and began to cast out them that sold therein,
and them that bought;

Mark 2:15 (AV)
And it came to pass, that,
as Jesus sat at meat in his house,
many publicans and sinners sat also together with Jesus and his disciples:
for there were many, and they followed him. 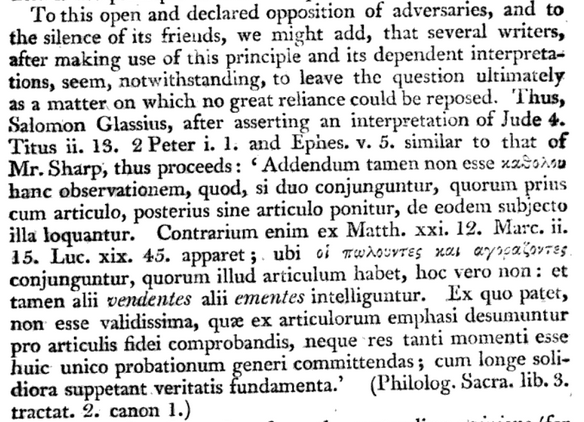 The discussion before Sharp often focuses on Erasmus, Beza and Glassius.

This British Critic article includes Erasmus and Beza, and fills this out with other writers, looking through the window of Wolfius. 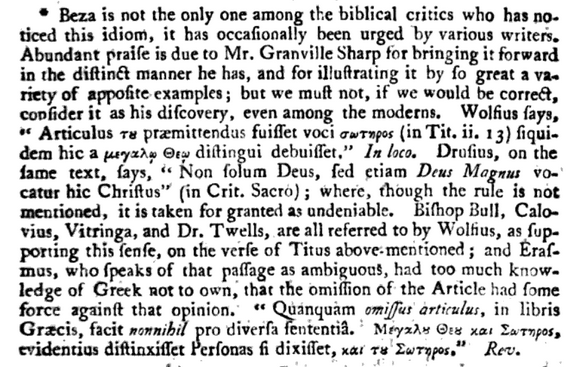 Dissertations Introductory to the Study and Right Understanding of the Language, Structure, and Contents of the Apocalypse (1823)
Alexander Tilloch
https://books.google.com/books?id=JYw-AAAAIAAJ&pg=PA264

And other spots, per the search on "distingui debuisset".

Note also the reference to:

An examination of St. Paul's Doctrine respecting the divinity of Christ, in which are notices some of Mr. Belsham's arguments in his translation and exposition of St. Paul's Epistles (1823)
Thomas Smart Hughes
https://books.google.com/books?id=xyyk29M_QzwC&pg=PA74