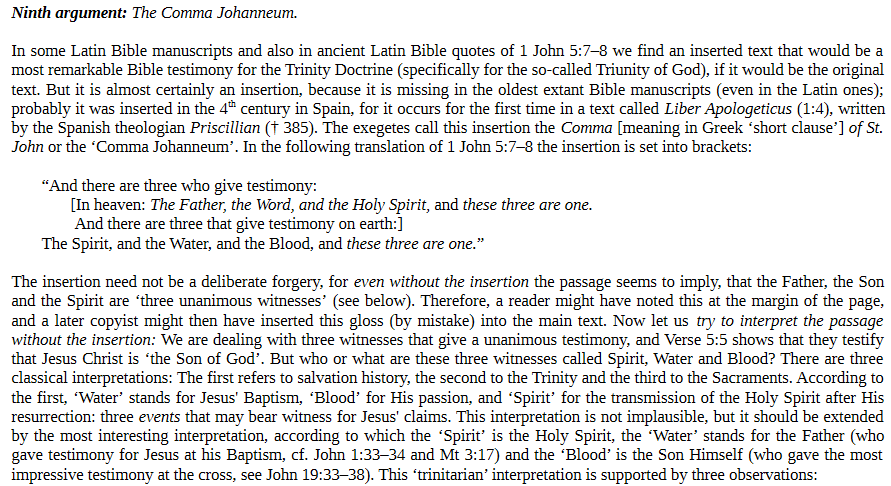 Same as above, TEXT rather than pic

In some Latin Bible manuscripts and also in ancient Latin Bible quotes of 1 John 5:7–8 we find an inserted text that would be a most remarkable Bible testimony for the Trinity Doctrine (specifically for the so-called Triunity of God), if it would be the original text. But it is almost certainly an insertion, because it is missing in the oldest extant Bible manuscripts (even in the Latin ones); probably it was inserted in the 4th century in Spain, for it occurs for the first time in a text called Liber Apologeticus (1:4), written by the Spanish theologian Priscillian († 385). The exegetes call this insertion the Comma [meaning in Greek ‘short clause’] of St. John or the ‘Comma Johanneum’. In the following translation of 1 John 5:7–8 the insertion is set into brackets:

The insertion need not be a deliberate forgery, for even without the insertion the passage seems to imply, that the Father, the Son and the Spirit are ‘three unanimous witnesses’ (see below). Therefore, a reader might have noted this at the margin of the page, and a later copyist might then have inserted this gloss (by mistake) into the main text. Now let us try to interpret the passage without the insertion: We are dealing with three witnesses that give a unanimous testimony, and Verse 5:5 shows that they testify that Jesus Christ is ‘the Son of God’. But who or what are these three witnesses called Spirit, Water and Blood? There are three classical interpretations: The first refers to salvation history, the second to the Trinity and the third to the Sacraments. According tothe first, ‘Water’ stands for Jesus' Baptism, ‘Blood’ for His passion, and ‘Spirit’ for the transmission of the Holy Spirit after His resurrection: three events that may bear witness for Jesus' claims. This interpretation is not implausible, but it should be extended by the most interesting interpretation, according to which the ‘Spirit’ is the Holy Spirit, the ‘Water’ stands for the Father (who gave testimony for Jesus at his Baptism, cf. John 1:33–34 and Mt 3:17) and the ‘Blood’ is the Son Himself (who gave the most impressive testimony at the cross, see John 19:33–38). This ‘trinitarian’ interpretation is supported by three observations:

• The words ‘water’, ‘blood’ and ‘spirit’ have neuter gender in Greek, but, strangely, the word ‘three’ doesn't occur in its neuter form, but in the masculine gender. This may indicate, that Water, Blood and Spirit are persons here, not only events.

In addition to these interpretations, there is the sacramental one, based on fact, that after the crucifixion ‘water and blood’ flowed out of the wound in Jesus' side, which was testified with emphasis in John 19:33–38. Water and Blood (seen as flowing out of Jesus' body) symbolize mystically the Sacraments of Baptism and the Eucharist, and the ‘Spirit’ may symbolize the ‘Sacrament of the Holy Spirit’ or Confirmation (the post-baptismal unction, alluded to already in 1 John 2:20,27). Since the Sacraments remind us of (and connect us with) Jesus, they testify about Him. – To my opinion, all three interpretations may be intended by St. John, who presents us three cryptic expressions, that seem to ‘invite the reader’ so search for all the hidden senses behind those words.
Last edited: Jun 20, 2021

This section has Macedonians, Peter Abelard and much more.
Last edited: Jun 20, 2021

First, lets keep it simple. Look at what he says about the grammar.

"The words ‘water’, ‘blood’ and ‘spirit’ have neuter gender in Greek, but, strangely, the word ‘three’ doesn't occur in its neuter form, but in the masculine gender. This may indicate, that Water, Blood and Spirit are persons here, not only events."
Click to expand...

However, Water, Blood and Spirit are NOT persons.
So Neidhart is acknowledging the solecism in the short text.