Greek, Latin and Syriac mss. are all massively in favor of the full verse.
(the basic information is kept hidden in textcrit blah-blah)

This is an example where inclusion/omission variants are totally different than alternate variants.
And you can easily see the Hortian nonsense.

Such a hand-wringing struggle where the Byz/TR text is clearly original. The wide-ranging attestation could not possibly be all sorts of multiple conflations.

Matthew Murphy Rose properly emphasizes that homoeteleuton (see Weiss and Vogels in Wieland below) is very simple to occur in the verse, leading to the small % of corrupt mss.

The Causes of the Corruption of the Traditional Text (1896)
Burgon and Miller
https://books.google.com/books?id=ye1JAAAAMAAJ&pg=PA275
https://www.ccel.org/ccel/burgon/corruption.iii.xix.html
https://biblehub.com/library/burgon...ional_text/appendix_ii_conflation_and_the.htm 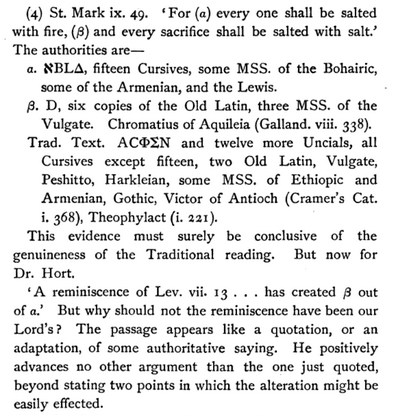 The Revised Version of the first three Gospels considered in its bearings (1882)
Frederic Charles Cook
https://books.google.com/books?id=B3Y_AAAAYAAJ&pg=PA211 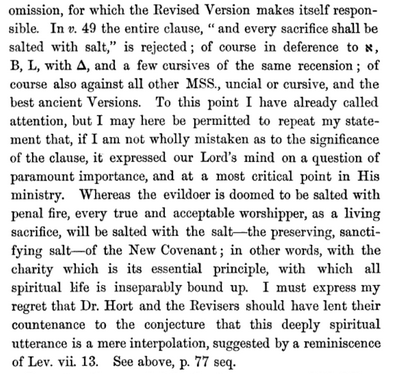 Donald Waite on Burgon on the conflation issue overall, Pickering is solid as well on this question.

Mark 9:49
Ken Matto
https://www.scionofzion.com/mark_9_49.htm
Affected Teaching Those whom the Lord was speaking about in the previous verses are those who are unsaved and if they remain unsaved they shall be cast into eternal Hell. The fact that they will be salted with fire means they will be tormented in the flames of eternal damnation for eternity. Then the Lord uses the same analogy but a different group of people are in view. The first half of the verse deals with unbelievers that He previously spoke of but now there is a different application for the same principle. (1 Pet 1:7 KJV) That the trial of your faith, being much more precious than of gold that perisheth, though it be tried with fire, might be found unto praise and honour and glory at the appearing of Jesus Christ: Every true believer is considered a sacrifice. (Rom 12:1 KJV) I beseech you therefore, brethren, by the mercies of God, that ye present your bodies a living sacrifice, holy, acceptable unto God, which is your reasonable service. As the unbeliever in hell is salted with the fire of judgment, the believer as a living sacrifice is salted with the fire of trials as we read in 1 Peter 1:7 and as we read in 1 Peter 4:12. (1 Pet 4:12 KJV) Beloved, think it not strange concerning the fiery trial which is to try you, as though some strange thing happened unto you:

As salt is used as a preservative, as believers we have the salt of the Gospel within us. (Num 18:19 KJV) All the heave offerings of the holy things, which the children of Israel offer unto the LORD, have I given thee, and thy sons and thy daughters with thee, by a statute for ever: it is a covenant of salt for ever before the LORD unto thee and to thy seed with thee. In Numbers 18:19, God speaks of a covenant of salt, but that covenant is one of eternal nature. The only covenant which lasts throughout eternity is the covenant of grace, so here in Numbers 18:19, the covenant of salt has foreshadowed the covenant of grace in that it is an eternally preserving covenant. (Jude 1:1 KJV) Jude, the servant of Jesus Christ, and brother of James, to them that are sanctified by God the Father, and preserved in Jesus Christ, and called: Jude 1 speaks about those who are sanctified by God and that would be the believers, and then the verse goes on to say that they are preserved in Jesus Christ and that is exactly what the second half of Mark 9:49 is speaking about when it speaks about every sacrifice being salted with salt. So when the modern versions leave off the second half of Mark 9:49, they are omitting a great promise that Christians will be preserved in Christ Jesus forever.

LaParola lists the Diatessaron on both sides, two for our phrase, one without.

The Testaments of the Twelve Patriarchs III
III.-The Testament of Levi Concerning the Priesthood and Arrogance.
https://books.google.com/books?id=oiXQAAAAMAAJ&pg=PA48
and of every clean beast and clean bird offer a sacrifice to the Lord, and of every firstling and of wine offer first-fruits;
and every sacrifice thou shalt salt with salt.19
19 Cf. Hom., xiv. I [Lev. ii. 13, Mark ix. 49.]

Has 2nd phrase, not the first, per LaParola
Ambrose Chromatius

For Hort, everything is argumentation trickery to support the Vaticanus-primacy corruption.

The New Testament in the Original Greek
Westcott-Hort
https://books.google.com/books?id=b9YUAAAAQAAJ&pg=PA101 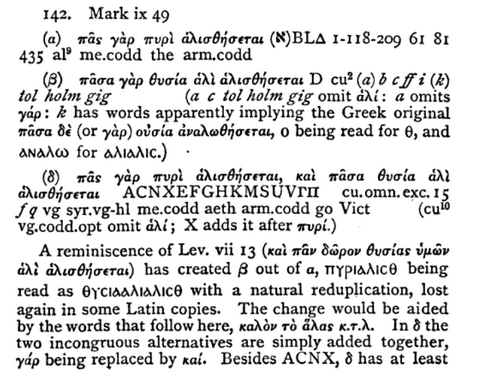 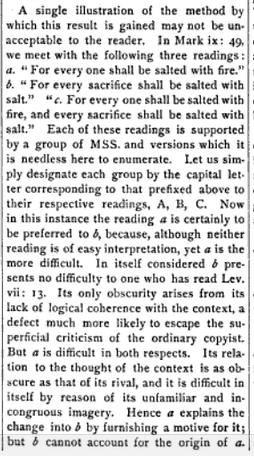 Fee writes concerning the Majority text type, “Most of the readings peculiar to this text are generally recognized to be of a secondary nature. A great number oF them smooth out grammar; remove ambiguity in word order; add nouns, pronouns, and prepositional phrases; and harmonize one passage with another. Its many conflate readings (e.g., Mark 9:49), where the Byzantine text type combines the alternative variants of the Egyptian and Western texts, also reflect this secondary process” (“Textual Criticism oF the New Testament," 8).
Click to expand...

COMMENTS: In Greek the clauses in question begin with "every" and end with "salted." While it is possible that one or the other of them was accidently (sic) omitted through a mistake of the eye, it is more likely that the second clause was added from Leviticus 2:13 as an explanation of the first, perhaps at first in the margin, and from there was either substituted for the first, or added to the text.
Click to expand...

By the way, the King James Version actually tends to strengthen this particular interpretation by the textual addition incorporated into its reading of Mark 9:49. The KJV reads -- "For every one shall be salted with fire, and every sacrifice shall be salted with salt." That last phrase is missing from most reputable manuscripts, therefore you will not find it in more modern versions of the Bible (and you won't find it in most ancient versions either, for that matter). Dr. Bruce M. Metzger, in his fabulous, monumental work "A Textual Commentary on the Greek New Testament," explained this addition: "The history of the text seems to have been as follows. At a very early period a scribe, having found in Lev. 2:13 a clue to the meaning of Jesus' enigmatic statement, wrote the Old Testament passage in the margin of his copy of Mark. In subsequent copyings the marginal gloss was added to the words of the text," thus creating the reading we find in the KJV [p. 103]. The scholars who produced The Expositor's Bible Commentary agree, stating that "a copyist finding Lev. 2:13 a clue to the understanding of this difficult saying noted the OT passage in the margin; subsequently his marginal gloss was added" to the text [vol. 8, p. 709].
Click to expand...

Weiss, Vogels, [Trg] support phrase
Compare Matthew 5:13 and Luke 14:34
One of WH's conflation readings, see WH § 142, p. 101f.
It is possible that one part had been accidentally omitted due to h.t. (so Weiss and Vogels).
Bousset for pure text, but for awkward reasons.
Baarda suggests a mistranslation from the Aramaic
Linder ... "For everyone will be salted for [the holy sacrifice] fire."
Burkitt (JTS 1916) writes ... the shorter reading ... is the only one that fits the context.
A. Pallis (Notes, 1932) suggests that the text is corrupt ...
Rating: 1? or - (NA probably wrong or indecisive, reconsider, in brackets?)

3.1 Mark 9:49 –“Salted with Fire”“For everyone will be salted with fire” (Mark 9:49). These words, attributed to Jesus by the second evangelist, constitute what is no doubt one of the most perplexing pronouncements in the synoptic tradition. To be sure, two prominent commentators have recently deemed it “one of the New Testament passages that defy interpretation”599and “perhaps the most enigmatic logion of Jesus in the NT.”600 These judgments do not, however, reflect a solely modern sentiment, for it is apparent that the apprehension that attends this peculiar saying is nearly as ancient as the verse itself. Mark 9:49 is, for instance, one of the few Markan texts that neither Matthew nor Luke incorporated into his Gospel.601Furthermore, the Greek manuscript tradition contains a number of textual variants of this logion, providing a strong indication that even those ancient scribes, whose mother tongue was Greek, were uncertain what to make of it. And strikingly, the history of the interpretation of our verse in the patristic period is, so far as I can tell, a history of silence.602

Typical textcrit blunder:
"and it alone could have given rise to all of the variants enumerated above.614"

614 See, however, Zimmermann (1959: 28-31), who offers the dissenting opinion that the longer reading (3) is the original and that the shorter reading (1) resulted from an instance of homeoteleuton, in which the copyist’s eye slid from the(Greek) (will be salted) at the end of the first clause to the same verb at the end of the second, thus omitting the second clause altogether. See also Elliott 1993: 199 .Elliot argues for the longer reading on the basis of Mark’s frequent use of repetition, which he takes to indicate that “[t]he so-called conflate reading is characteristic of Mark.”

616 That the reference to salting with fire could be interpreted as a fiery test is confirmed by the comment of Theophylact in Ennaratio in Ev. Marci (PG 123.70): (Greek) (“He says, ‘For everyone will be salted with fire,’ that is, will be tested”). The saying is similarly
Last edited: Jul 8, 2021
You must log in or register to reply here.
Share:
Facebook Twitter Reddit Pinterest Tumblr WhatsApp Email Share Link
Top