This comes out of a discussion with Dean Furlong.

We noticed the robustness of the 1700s discussions.

The modern writers are pretty much having the same discussion, without acknowledging the history.

Dean Furlong has a chapter on the Polycrates ref in his dissertation, and two chapters in the book John also Called Mark.

And I am not attempting to find the Latin writers not translated or referenced in English.

Richard Bauckham will be an example of the modern writers.
(Giving him credit for at least contributing to the discussion.)

A true narration of all the passages of the proceedings in the Generall Assembly of the Church of Scotland holden at Perth, the 25 of August ... 1618, etc (1621)
David Lindsay
https://books.google.com/books?id=rQ9lAAAAcAAJ&pg=RA2-PA53
David Lindsay (c. 1575-1641)
https://en.wikipedia.org/wiki/David_Lindsay_(bishop_of_Edinburgh) 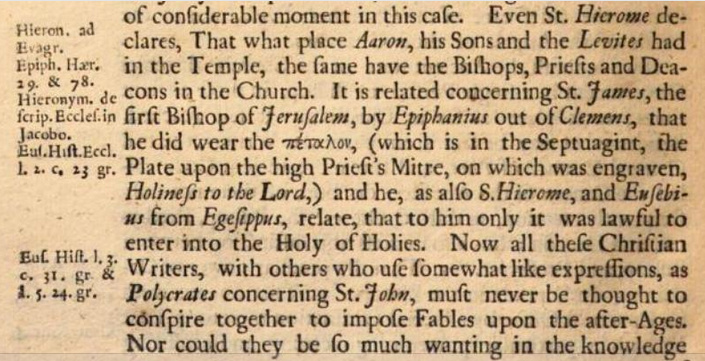 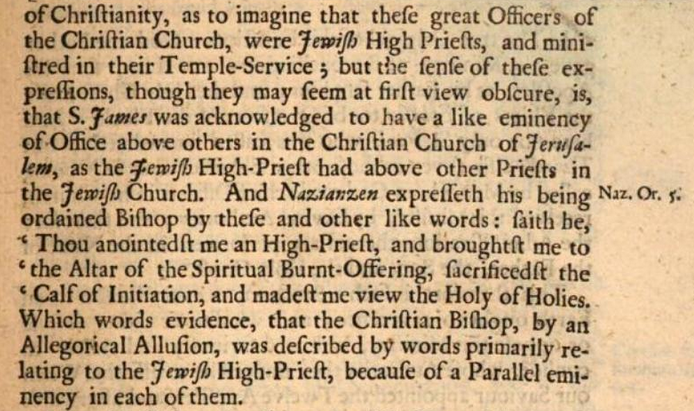 Two Treatises, One of the Christian Priesthood the Other of the Dignity of the Episcopal Order: Formerly Written, and Now Published to Obviate the Erroneous Opinions ... in a Late Book, Entituled, The Rights of the Christian Church [by M. Tindal] With a Large Prefatory Discourse, Wherein is Contained an Answer to the Said Book (1707)
Georges Hickes
https://books.google.com/books?id=9pNEDSGaG4cC&pg=PA143
George Hickes (1642-1715)
https://en.wikipedia.org/wiki/George_Hickes

Nathaniel Lardner was very good in his 1753 book.

And Valerius supposes that St. John actually wore such a plate; which supposition is fully confuted, and ridiculed as it deserves, by E. S. Cyprian, in his notes upon that chapter of Jerom’s Catalogue. Me thinks that Polycrates speaks figuratively ; not that St. John really wore a golden plate as the Jewish high-priest did; but that he had a like authority among Christians; and that his rule or practice, about the time of keeping Easter, was decisive. ... By Witsius this story is considered as false, without so much as the appearance of truth or probability. Le Clerc was inclined to think, that Polycrates spoke allusively and figuratively. F. A. Lamper approves of Solomon Cyprian’s arguments, and calls this story a mere fable, and though the literal sense of the words be very absurd, yet he conceives it may be the true meaning of Polycrates. Dr. Heumann takes a quite different course, and proposes this ingenious observation: That the priest bearing a plate, intended by Polycrates, is not John, but Jesus Christ; and that his Greek, as preserved in Eusebius' Ecclesiastical History, ought to be translated after this manner; “And John, who leaned on the Lord’s breast, (who was made priest, bearing a plate,) and was a witness, and master,” or rather, “ And John, that witness and master, who lay in the Lord’s bosom, who was made priest, bearing a golden plate.”
Click to expand...

The variety of views and analysis mentioned here by Nathaniel Lardner really caught our attention!
The moderns give the same variety.

Hippolytus' Ode on the Scriptures is important too with regard to the petalon, as well as the references to Mark as a priest wearing the petalon.

Epiphanius refers to James as a priest wearing the petalon too.

More can be added !

Commentary on the Disciple known to the High Priest
William Kelly
An Exposition of the Gospel of John
https://books.google.com/books?id=cb2RHDaoBpYC&pg=PA532

Acts 4:6 (AV)
And Annas the high priest, and Caiaphas, and John, and Alexander,
and as many as were of the kindred of the high priest,
were gathered together at Jerusalem.
Last edited: Apr 1, 2021

The Criticism of the Fourth Gospel: Eight Lectures (1905)
https://books.google.com/books?id=jCdWAAAAMAAJ&pg=PA17 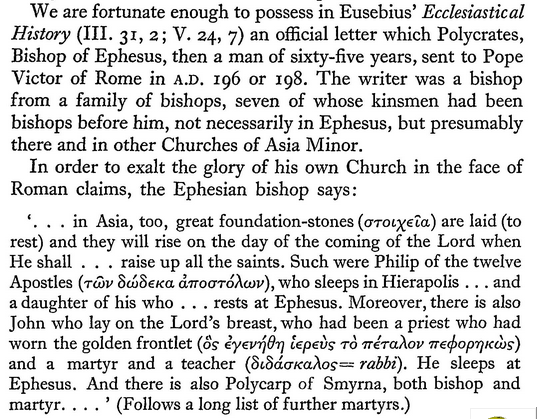 Now here is a letter of the greatest solemnity, written by the bishop of the diocese, which was or became very soon the Metropolitan See of Asia, addressed to the Pope of Rome, in which every word may be supposed to have been weighed and pondered upon and chosen with the greatest care: in it Philip is introduced as ‘one of the twelve Apostles’, but John is not! The reader may say: John is given a higher title: ‘he who lay on
the Lord’s breast’. But the two titles might so easily have been juxtaposed without difficulty by saying, e.g. ‘the one from among the Twelve who leaned against the Lord’s bosom’! Yet, in an enumeration meant to cumulate all the titles to glory of Asia, this one is omitted. Still, this is admittedly again a purely negative observation.

Or have we not rather candidly to admit the unavoidable conclusion—first drawn by the late Dr. Hugo Delff of Husum (PI. VI)—that Polycrates could no more dream of identifying the Ephesian John, ‘who had been a ruling high-priest and a rabbi’ (Greek), with the ‘illiterate and unlearned’ fisherman of Galilee, than a modern English writer, speaking of a member of the Royal Family buried in Westminster Abbey, could be imagined to refer with these same words to a former herring-fisher who had plied his trade in Yarmouth ?
Click to expand...

John, the Son of Zebedee: The Life of a Legend (1994)
R. Alan Culpepper
https://books.google.com/books?id=-6O2UTnPrMQC

Temple Christology in the Gospel of John: Replacement Theology and Jesus as the Self-Revelation of God (MA Thesis) (2010)
Kenneth Steven Brown
https://www.researchgate.net/public...Jesus_as_the_Self-Revelation_of_God_MA_Thesis

John the Theologian and his Paschal Gospel: A Prologue to Theology (2019)
John Behr
https://books.google.com/books?id=6u-MDwAAQBAJ&pg=PA95

The Free Church of Ancient Christendom, and Its Subjugation Under Constantine (1852)
Basil Henry Cooper (1783-1823)
https://books.google.com/books?id=capdAAAAcAAJ&pg=PA248
ref to Hengstenberg

The first and second Advent: or, The past and the future with reference to the Jew, the gentile, and the Church of God(1858)
Bourchier Wrey Savile
https://books.google.com/books?id=rD1VAAAAcAAJ&pg=PA106
Bourchier Wrey Savile (1817-1888)
https://en.wikipedia.org/wiki/Bourchier_Wrey_Savile
The Neanderthal skull on evolution, in an address supposed to be delivered A.D. 2085, with three illustrations (1885)
https://archive.org/details/neanderthalskull00saviuoft/page/n4/mode/2up
The truth of the Bible : evidence from the Mosaic and other records of creation : the origin and antiquity of man : the science of Scripture : and from the archaeology of different nations of the earth (1871)
https://archive.org/details/truthofbibleevid00savi/page/n6/mode/2up
Paul in England
https://books.google.com/books?id=A_kIAAAAIAAJ&pg=PA368
The Introduction of Christianity Into Britain: An Argument on the Evidence in Favour of St. Paul Having Visited the Extreme Boundary of the West (1861) (2013 edition)
https://www.amazon.com/Introduction-Christianity-Into-Britain-Argument/dp/1371183597 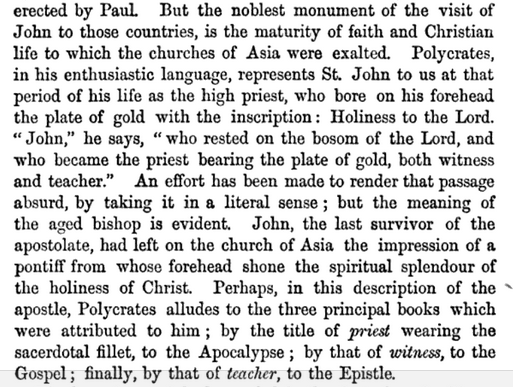 The Gospel of st. John, its authorship and authenticity - (1877)
William Caesar
https://books.google.com/books?id=-qssAAAAYAAJ&pg=PA33

The Gospel according to s. John, with notes and intr (1881)
Alfred Plummer
https://books.google.com/books?id=PpwCAAAAQAAJ&pg=PA14
Alfred Plummer (1841-1926)
https://en.wikipedia.org/wiki/Albert_Plummer

The Testimony of the Beloved Disciple

How do historical and literary details contribute to a coherent theological witness to Jesus in the Gospel of John? A leading British evangelical New Testament scholar answers that question with studies on themes from messianism to monotheism, symbolic actions from foot-washing to fish-catching...
books.google.com

the threefold identification of John the Elder with the author of the Gospel and with the beloved disciple has only rarely been proposed before Hengel. Hengel himself refers to no precedents for it,10 and I know of only three:

the arguments of H. Delff11 (though he distinguished the beloved disciple s work from extensive later interpolations), C. F. Burney12 (whose case was only very briefly argued), and J. Colson.13 In the period when authorship of the Gospel by John the Elder was quite often canvassed, the possibility that he could also be the beloved disciple was rarely raised even though it was usually rightly recognized that, according to Papias, he had been a personal disciple of Jesus. This seems to have been because of the continuing strength of the view that the evidence of the Gospel itself indicates the identification of the beloved disciple with John the son of Zebedee. In English scholarship at least, this view was very widely accepted well into this century as a result of Westcott's famous case for it.14 B. H. Streeter, who in England especially espoused the cause of John the Elders authorship of the Gospel, also regarded the identification of the beloved disciple with John the