Wednesday, July 1, 10am CET, TeTra Seminar paper on Zoom:
Brent Nongbri (MF Norwegian School of Theology)
"Revisiting the Date of Codex Sinaiticus"
If you'd like to attend, feel free to contact us at dan.batovici@kuleuven.be or andy.hilkens@ugent.be

Some thoughts!
Used in some of the posts on Facebook

And it is unclear why the emphasis would be simply radiocarbon. The group BAM, Bundesanstalt für Materialforschung und-prüfung under Dr. Ira Rabin in Berlin has a far wider range of testing analysis techniques for parchment and ink, and even experience on the DSS. They had been scheduled to test the Leipzig Sinaiticus pages in 2015, until the tests were cancelled.

As for the results above, it will be very interesting to see how they get a terminus ante quem in the 500s. Hilgenfeld was about 600, and the early date was only the result of Tischendorf directing people to use his facsimile and analysis. Why not a terminus ante quem of 1840? Based on the many evidences of Mount Athos creation involving Constantine Simonides.

And does this discussion go into ink, stain and colour anomalies and the "phenomenally good condition" (Helen Shenton, British Library) of the manuscript, and the easy-peasy page turning that can be seen in video? Or is the discussion essentially script-based, which would be a very limited palaeography, since any script can be easily copied into a future replica or forgery.

Brad Cooper What exactly is the question? The differences could easily be accounted for in the different environments that they were stored in during those intervening years.

Steven Avery
I will put the questions in three general areas.

#1 is the "phenomenally good condition" (Helen Shenton, British Library) of the manuscript, parchment and ink. You can see that in two videos, one recent from the BBC, and an earlier one from 1930s. Also you can see the super-ink on the pages that I call "palaeographic puzzles." e.g. 1800s ink next to supposed 300s.

1500 years, supposedly, dried out in the hot desert sun, used century upon century -- yet today we have easy-peasy page turning of this "ancient" parchment.

And the experts never offered anything remotely similar.

Leipzig (1844) being white parchment and unstained, and consistent leaf after leaf, while

British Library (1859) being stained, uneven, and darker, every leaf.

There has been no theory offered to mach . Maybe the Russians were avid coffee drinkers and kept spilling on the manuscript? Imho, that is the BEST possible theory that could match authenticity. The two libraries have offered no sensible handling scenarios. Even when the British Library acknowledged the manuscript section differences, it was all left up in the air. |

(Remember, coffee stains did get on some of the DSS, but this would be a massive amount of spillage )

One theory does match the evidence.

1844 Leipzig was taken out without any tampering.

1859 British Library (formerly St. Petersburg) had a major staining job done. At the monastery, and perhaps also a bit in Cairo in the strange months of 1859. It was done a bit amateruishly, thus the uneven results.

Chemical and related tests would blow the whistle, but nothing has ever been done, on either section. The tests planned in Leipzig 2015 by the Berlin scientists at BAM were cancelled.

#3
is in some ways the most fascinating, what we can call the historical imperative.

After Simionides claimed that he was involved with the creation of Codex Simoneidos on Mount Athos, the controversies flared in the British Journals. Remember, Simomides has published the Greek Hermas a few years before the Sinaiticus Hermas, so his involvement was a real likelihood. This was too much of a "coincidence".

One element that came out was that Kallinikos and Simonides, at least three times, explained that Tischendorf had been involved with the colouring of the manuscript, that was taken out in 1859.

Today we can see that this claim matches 100% the actual differences between the smaller 1844 section and the larger British Library section.

Plus, made without observational evidence, this would have been a truly absurd claim, destroying his own position. If the colouring had not actually occurred, a simple manuscript observation would destroy the Simonides claim.

Tischendorf was, in fact, quite crafty. The two sections were far away from each other, access was very difficult, if not impossible. and he simply told people to use his wonderful facsimile edition instead.

Even now, 150 years later, there are many Tischendupes.

Steven Avery Overall, the evidence simply and strongly points to the conclusion that Sinaiticus is an 1800s creation.

Tests like those planned by BAM would help, however the libraries are unlikely to agree on any testing, since they are well aware of the problematic element of their prized possession. There would be a lot of egg on their face when any real tests are done. (And many of the best tests are non-destructive.)

The current textual crew is working with "deeply entrenched scholarship" that forces them to take a "circle the horses" approach.
Click to expand...

Tweet
Thanks! Unclear why the emphasis is on radiocarbon dating. BAM, Bundesanstalt für Materialforschung und-prüfung, Berlin under Dr. Ira Rabin has a wider range of testing analysis techniques, parchment & ink. Tests scheduled on the Leipzig Sinaiticus pages in 2015 were cancelled.

The Zoom meeting starts in 15 minutes. If there are interesting points made, I will try to text them in here, and if others are listening they can text here as well.
Click to expand...

The question was asked to Brent at the end what would prevent an 1840 terminus ante quem. My text was to Dan Batovici, and he passed it on.

Brent hesitated, and threw out the thought that the small cursive notes would be unlikely.

However, that seems quite speculative. You might find 1000 such notes on Athos.

(In fact, it is unclear whether the exemplars he offered for similar notes are the same tiny size.)

And that those who are studying Simonides papyri think it would be out of his competence range. He mentioned Rachel Yuen-Collingridge and another person.

They generally do not understand the historical component of the Athos group working on the manuscript. |

And how the attempt to make a box-script replica in Athos is easy-peasy compared to the papyri of 20 years later, if Simonides was playing around with Meyer blanks.

Basically, nothing precludes the 1840 terminus ante quem.
Click to expand...

The best part of the talk was Dr. Ira Rabin. She confirmed what happened in Leipzig, adding more details. They were there, ready to go, and the testing was cancelled by the new head fella, who overruled two individuals who were ready to go. His out was "who will be responsible if something happens". Which is silly, since BAM has worked on mss. for a long time, including the DSS. Rabin gave the names.

And I had sent to Dan the information about their planned testing, and he "called on" Rabin, I did not know at that time she was there .

And she discussed a spectrographic analysis from the British Library that is not really usable.

She was spot-on, with passion about the road-blocks to testing.

She does not really understand that the reluctance of the libraries is largely connected to their realization that testing can show it to be a very new ms. 1840. A risk they are very reluctant to take.

I do not know if there will be a transcript, but if there is, that is main point of our interest.
Click to expand...

The point from Brent was relatively minor to us, as was the call for radiocarbon dating.

He analyzed some of the arguments for 4th century and showed some flaws that would allow 5th century. This mostly involved the small cursives, which were being used.

He apparently did not know the history of the date discussions (Hilgenfeld, Uspensky) and that did not come up.

Some of the attendees pointed out the limitations of radiocarbon dating, and the advantages of full-orbed testing, like BAM.

Brent had worked out a schema where he actually thought C-14 testing would properly distinguish 350 from 450. All highly unlikely, even with a ms. that actually was ancient.
Click to expand...

I did snap pictures of the stuff that Brent used.

And I put this up right away as a summary, to prevent memory fade.

Let's see what shows up on Brent's blog the next days, and any other blogs or forums.
Click to expand...

From the Brent Nongbri talks, some of the more important ones, more later:
Two were too large, will change type later or skim edges. 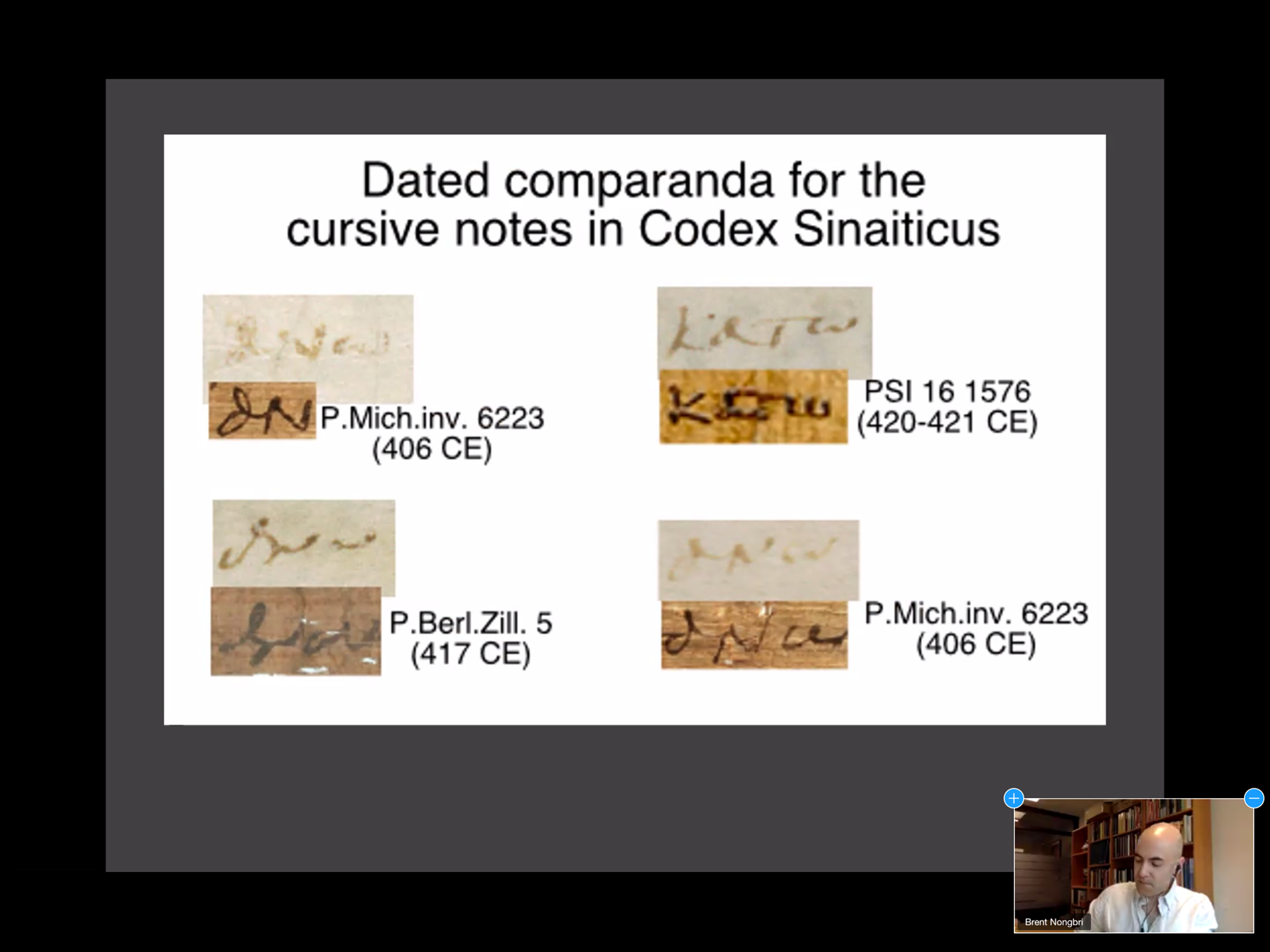 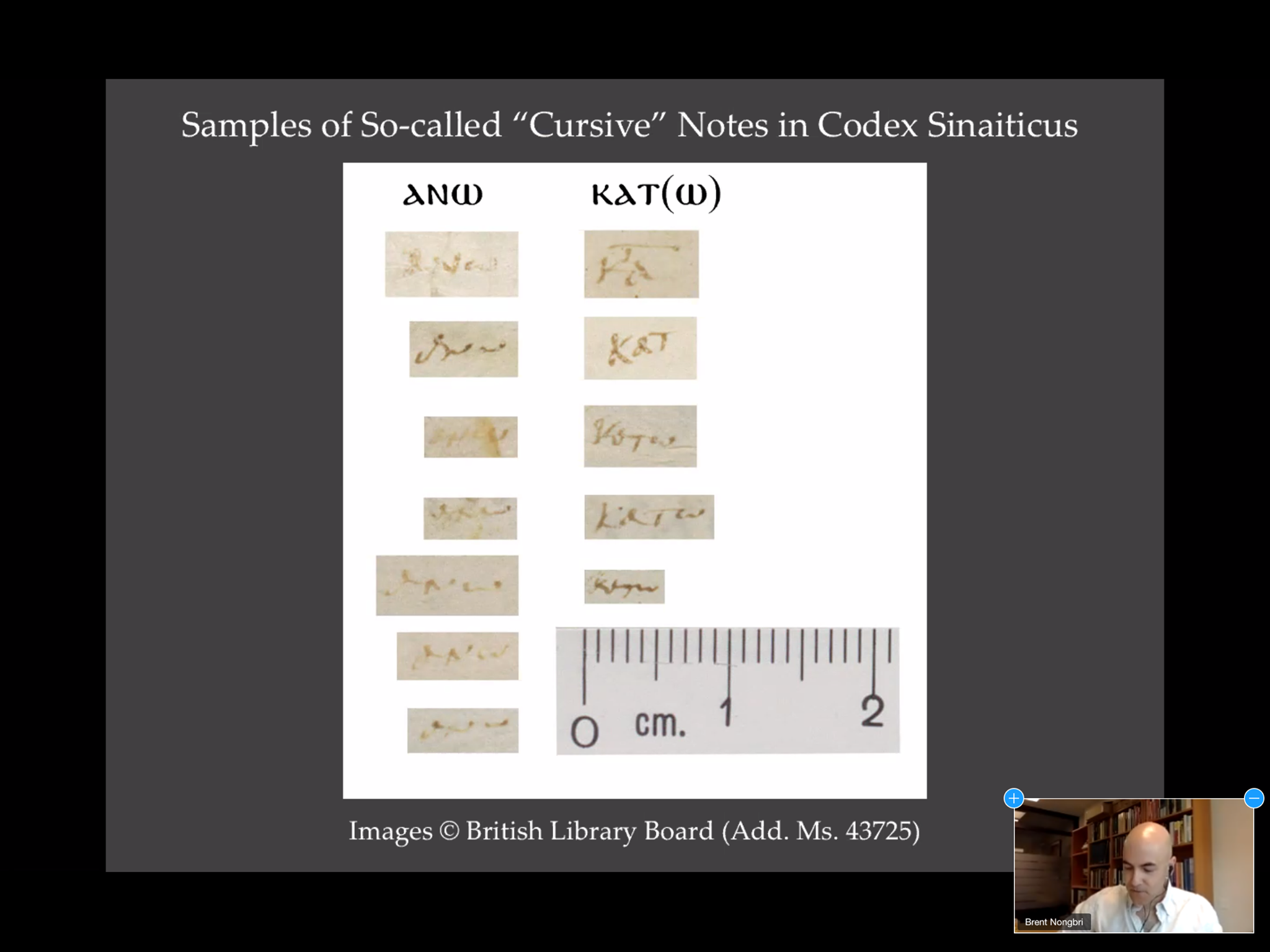