From an orthodox trinitarian perspective, the main supporters of the Christ is God apposition theory, Tom Hubeart brings up this question here:

Many others bring this up, often in the context of Christ being superior to God the Father. When I bump into those comments I will add them here.

So far, I have never seen any sensible answer to the question above.

This applies also to the remaining verses in the Granville Sharp Rule for Fools. He actually was concerned about the Sabellian aspect of one of his verses, but the question above is more fundamental.
Last edited: Dec 19, 2021

This is a related consideration.
https://adventistbiblicalresearch.org/wp-content/uploads/Problems-in-Bible-Translations.pdf

Ehrman is funny, he now tries to call Jesus God in Romans 9:5, as the Angel of the Lord.

last revised 3/17/17 The "Blessed God" a common description of the one true God in the Old Testament (both in the original Hebrew, and ...


Bart Ehrman in his book How Jesus Became God in chapter 7 changes his mind and now leans toward the interpretation that Roman 9:5 DOES have Paul referring to Jesus as God (in some sense).

So too Jesus in Paul. One of the most debated verses in the Pauline letters is Romans 9:5. Scholars dispute how the verse is to be translated. What is clear is that Paul is talking about the advantages given to the Israelites, and he indicates that the “fathers” (that is, the Jewish patriarchs) belong to the Israelites, and “from them is the Christ according to the flesh, the one who is God over all, blessed forever, amen.” Here, Christ is “God over all.” This is a very exalted view.

But some translators prefer not to take the passage as indicating that Christ is God and do so by claiming that it should be translated differently, to say first something about Christ and then, second, to give a blessing to God. They translate the verse like this: “from them is the Christ according to the flesh. May the God who is over all be blessed forever, amen.” The issues of translation are highly complex, and different scholars have different opinions. The matter is crucial. If the first version is correct, then it is the one place in all of Paul’s letters where he explicitly calls Jesus God.

But is it correct? My view for many years was that the second translation was the right one and that the passage does not call Jesus God. My main reason for thinking so, though, was that I did not think that Paul ever called Jesus God anywhere else, so he probably wouldn’t do so here. But that, of course, is circular reasoning, and I think the first translation makes the best sense of the Greek, as other scholars have vigorously argued.13 It is worth stressing that Paul does indeed speak about Jesus as God, as we have seen. This does not mean that Christ is God the Father Almighty. Paul clearly thought Jesus was God in a certain sense—but he does not think that he was the Father. He was an angelic, divine being before coming into the world; he was the Angel of the Lord; he was eventually exalted to be equal with God and worthy of all of God’s honor and worship. And so I now have no trouble recognizing that in fact Paul could indeed flat-out call Jesus God, as he appears to do in Romans 9:5.

If someone as early in the Christian tradition as Paul can see Christ as an incarnate divine being, it is no surprise that the same view emerges later in the tradition. Nowhere does it emerge more clearly or forcefully than in the Gospel of John.
Click to expand...

[Red highlighting and bolding above is by me, Annoyed Pinoy]
Click to expand...

It is not vital to the doctrine of the Divinity of Christ to find the declaration that he is God in this verse. The Apostle Paul may have believed that his Lord and Savior was Divine, and may teach this in his Epistles; and yet may have chosen to limit himself in the use of the name God, so far as to apply it to the Father only....


Brian Winter said:
I'm a Trinitarian, so my position is known to you and I've stated it repeatedly. Three persons, consubstantial, one God. We can have that theological discussion elsewhere but it's not for here and now.
Click to expand...

Steven Avery said:
Clearly, it is.

You want to avoid the discussion because it is the fundamental refutation of the position that tries to change the New Testament away from the Authorized Version to new improved verses that say "Jesus is God" or "Christ is God".

Friedrich Adolph Philippi tries a dance through this minefield.
https://books.google.com/books?id=cfFEAAAAYAAJ&pg=PA68 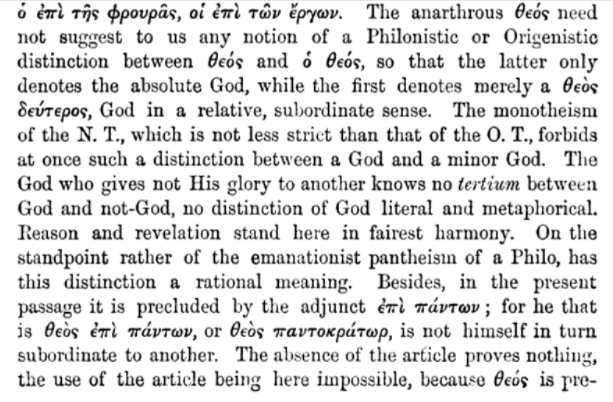 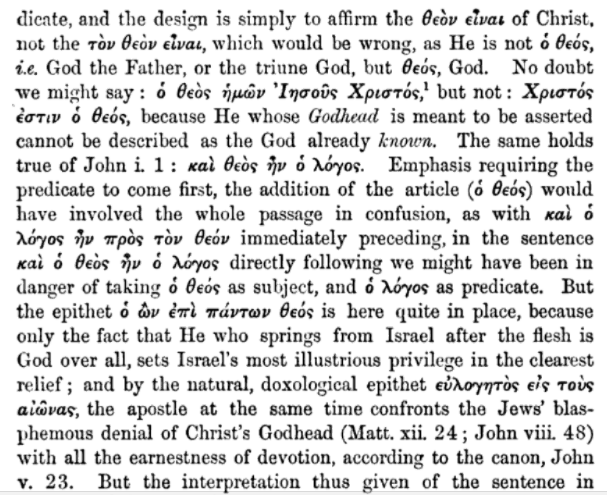