Murray Harris comes close, and he is very comprehensive, I may stick his pages up here, or at least the most salient sections.

“the natural association of θεὸς with εὐλογητὸς”

As we see in the AV text and is missing in your English corrections.

And right after that Murray talks of two possible translations, the first is the AV pure Bible, #5 on his chart, but he prefers the second, one of the corruptions.

So he does get close.

On p.161 he goes into the issue that the two words are normally in the reverse order, “a pattern of Biblical usage” (p.162) Looks like much ado about nothing. He actually makes a decent point about the “dominant thought” - akin to what I shared above about “emphasis.” And then more explanation is given by Winer.

There also is a good spot where he connect Christ with two related descriptors, "over all" and blessed for ever. Around p. 162, I will look for it. (I have pictures now of all the pages, Google varies in showing pages based on PC, iPad, previous use. )

I may expand this when on puter rather than iPad .

In Greek, the adjective lacks the article and is therefore in the predicate position. A predicate adjective (in this case, "blessed") "describes or modifies the subject of a sentence." Therefore the one blessed is Christ, who is described as God.

Both of these passages discussed by Harris refer to Christ as "God."
Last edited: Nov 19, 2021

If the three things describing Christ were distinct, that would be shown by a comma separating God and blessed.

The English is simple, if you just read it straight-on.
B

Steven Avery said:
If the three things describing Christ were distinct, that would be shown by a comma separating God and blessed.

The English is simple, if you just read it straight-on.
Click to expand...

Harris (our subject and first witness)​ 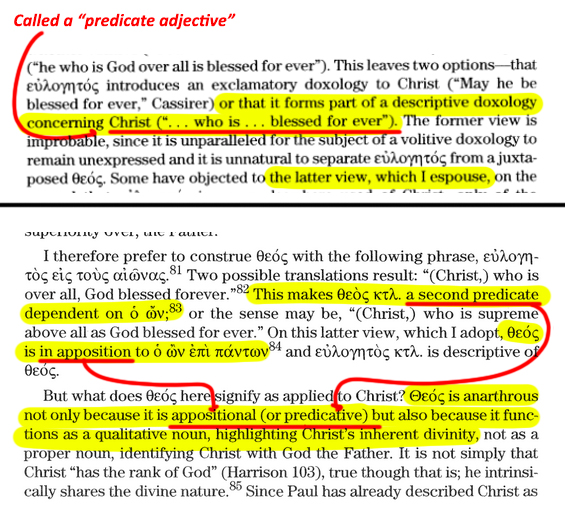 Cranfield (a second witness, one of Harris' sources)​

As between (i) [i.e. "who is God over all, blessed for ever," p. 465] and (ii) [i.e. your "AV and #5" reading, "who is over all, God blessed for ever," p. 465], (ii) should probably be preferred. According to this explanation, v. 5b affirms first Christ's lordship over all things (cf., e.g., 14:9; Phil 2.10) and secondly His divine nature. To take the three words ἐπὶ πάντων θεὸς together [i.e., reading (i)] is less satisfactory; for a statement that Christ is 'God over all' would be open to misunderstanding--it could suggest a meaning which it is absolutely certain that Paul would never have intended (namely, that Christ is God to the exclusion of, or in superiority over, the Father). So, putting a comma at the end of v. 5a, we translate v. 5b: 'who is over all, God blessed for ever. Amen.' (C. E. B. Cranfield, Romans, Vol. 2 (1975), p. 469)​
In his abridged commentary, he writes concerning the above point, "We take it then that in v. 5 Paul is affirming that Christ, who, in so far as His human nature is concerned, is of the Jewish race, is also lord over all things and by nature God blessed for ever." (p. 222). How would His "human nature" contrast with His nature of being "blessed by God?" But it is obvious from the context that he understands Christ as God.

Cranfield notes that readings (iii), (iv), and (v) were deliberately formulated against readings (i), "God over all," and (ii), the AV reading, to deliberately avoid, as he says, "the use of θεὸς with reference to Christ" (p. 466):


The one substantial argument which has been adduced in favour of (iii), (iv) or (v) and against (i) and (ii) [the AV reading]--and it has been used from early times--is that the in the rest of the Pauline corpus there is no clear instance of the use of θεὸς with reference to Christ.​
He notes again on p. 468:


With regard to the one really serious argument against (i) and (ii) [the AV reading] and in favour of taking either all or part of v. 5b as an independent doxology referring to God, while it may well be true that Paul has nowhere else in the extant epistles explicitly referred to Christ as θεὸς . . . to conclude that he cannot have done so here seems to us quite unjustifiable."​
If the construction didn't refer to Christ as θεὸς, there would be no reason to address it thus. 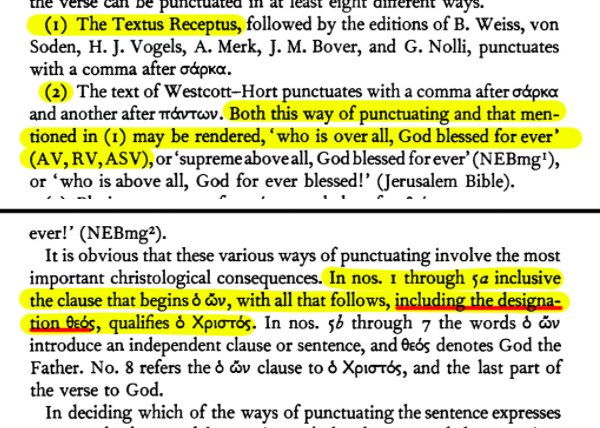 And this is in addition to the English Commentators who, without even mentioning the Greek, understand Christ in the AV is called "God." I have told you the Greek cannot form a compound adjective here. Multiple answers on Reddit and stackexchange have yielded the same answer to you. Those familiar with the Greek text (above) don't see what you are reading.

How much evidence do you need before you consider that you may really be just reading it wrongly? And making all kinds of bluster and accusations unnecessarily towards people who are trying to help you understand it?
Last edited: Dec 17, 2021
You must log in or register to reply here.
Share:
Facebook Twitter Reddit Pinterest Tumblr WhatsApp Email Share Link
Top