..... out to his critics that he based his Greek text on manuscripts from Britain, Brabant, and Basle.49 The British manuscripts no doubt refer to those Erasmus collated during his Cambridge sojourn (1511-1514). Their number is unknown, but it is sure that among them was MS. 69, sometimes called the Codex Leicesterensis, which includes the entire New Testament with minor gaps.50 This is an extremely important witness to the Greek New Testament, a prime member of a closely related and highly valued group of manuscripts known as Family 13; the entire group in turn is thought to be related to the third-century text used by Origen in Caesarea. Erasmus did not esteem the manuscript so greatly as modem textual critics: Family 13 had yet to be identified in Erasmus’ day, and he may be excused for not recognizing the special importance of this manuscript. But it is certain that he consulted MS. 69 because he cited—and rejected—readings peculiar to it in the Annotations.5I Other manuscripts Erasmus collated at Cambridge remain unidentified.

Far more important in any ease were the manuscripts Erasmus used at Basle. These manuscripts are in general quite well known, though they can be made to yield new information on the character and development of Erasmus’ textual scholarship. They went to Basle in the train of John of Ragusa,
one of the leaders of the Council of Basle (1431-1439). He lingered in Switzerland after the Council, died in Lausanne in 1443, and bequeathed his library to the Dominicans in Basle.52 Erasmus consulted some of Ragusa’s manuscripts of the Greek New Testament at the Dominicans’ library', but Johann Reuchlin had alreadv borrowed others when Erasmus arrived in Basle (August 1514) and began to prepare copy for his edition. Erasmus borrowed them temporarily and returned them to Reuchlin, who retained them until his death in 1522. Most of Ragusa’s books were then returned to Basle, though some were scattered elsewhere. The Reformation closed the Dominicans’ house in Basle in 1529, and the University of Basle benefited by its library; the manuscripts remain even today in (to give it its proper name) the Offentliche Bibliothek der Universitat Basel. (In the following pages I indicate in parentheses the modern shelf mark after the first citation of each manuscript.)

Erasmus based his editions largely on two codices now regarded as inferior witnesses to the Greek New Testament: MS.2 of the gospels (A. N. IV. 1) and MS. 2 of Acts and the apostolic epistles (A. N. IV. 4). Both date from the twelfth century. Erasmus used the manuscripts themselves as printer’s copy, and one may still consult the observations and corrections he introduced into them.53 The codex of the gospels especially required his attention: sloppily copied, it abounds.

It is a commonplace that Erasmus in editing the Greek New Testament text of 1516 used a late Byzantine manuscript of the Gospels for printer’s copy, in which he entered marginal notes by way of editing his text. It is equally common, also, to repeat the criticism that Erasmus used a recent copy from among his sources for the Gospel text and that this was a basic cause of an inferior text.

A recent examination in Basle of the manuscripts used by Erasmus has produced certain observations which seem worthy of emphasis, tending as they may toward clarification and correction of the usual account of how the textus receptus arose.

... the physical state of the Gospel manuscript in question (Gregory’s Codex 2: U. of Basle, A. N. IV 1).... Other observations center about the date of Codex 2 of the Gospels. Some have held that it was written in the fifteenth century, not long before Erasmus used it. The recent personal examination left no doubt that Gregory’s twelfth-century dating is right, and that we must evaluate the work of Erasmus on this basis. The one other Gospel source Erasmus had was Codex 1 (U. of Basle, A. N. IV 2) which was also of the twelfth century; but Gregory (who dated it as early as the tenth) considered it a notably bad text. Codex 1 had little effect upon Erasmus’ work, but even if he had chosen to use it for printer’s copy his text
would have been substantially the same. Indeed, among manuscripts after about 600 A. D. there is seldom a substantial difference to be observed except for local or family resemblance. ....

Erasmus may be defended even against his own oft-quoted admission of haste1. Suppose he had taken ten years instead of ten months; could the result have been much different, under the circumstances? A case in point is the Complutensian New Testament, praised by many for the care and time expended as well as for the superior manuscript sources borrowed and bought. Yet we must agree with Bishop Marsh who characterized that
text as corresponding to the modern manuscripts in opposition to the ancient. 1 Scrivener quite rightly noted that “the text it exhibits does not widely differ from that of most codices written from the tenth century downwards”2.

Next, let us observe what Erasmus actually did to the Gospel text of Codex 2. The first answer is: very little. He gave his attention to the correction of accents and breathings. Beyond this, he made fewer than three notes to the page, and two-thirds of these were mere itacisms. Hardly one note to a page, on the average, can be considered of even minor importance. What Erasmus did to the text of Codex 2 was too slight to merit much concern or praise3. The wonder of it is, not that he finished the job so quickly, but rather that he took so long to do so little.

We should not attribute to Erasmus the creation of a “received text”, but only the transmission from a manuscript text already commonly received to a printed form in which this text would continue to prevail for three centuries more.

.... It would be a false assumption that wherever Erasmus has revised the text in Codex 2, the change was derived from Codex 1.... The 1516 edition is not indebted to Erasmus nor to Codex 1, but merely conforms to Codex 2 itself.

... In all the editorial notes of Erasmus thus far mentioned above, the printed edition of 1516 agrees with the pale-ink revision. Furthermore, these changes by Erasmus have in most cases come to be supported by later discovery and research, so that as far as Erasmus went in editing Codex 2 he merits chiefly commendation rather than the customary condemnation.

The last observation to be presented here is of greater surprise and importance. It is this, that the printer did not accept everything that Erasmus proposed. The 1516 edition is not a replica of the text of Codex 2 as revised by Erasmus, but rather is it true that there are a number of departures from the text that was submitted by Erasmus for the printer. A revision written in by Erasmus was sometimes disregarded, and where Erasmus made no change the printer himself sometimes revised1. If Codex 2 was printer’s copy — and this appears to be certain — it is equally clear that someone reserved the right to revise that copy, in both minor and major points .

... The instances here cited from the Gospel of Luke form adequate illustration of the surprising fact that the Erasmus edition is not a mere reproduction of Codex 2 as Erasmus revised it. Who was responsible for the gap: Froben, or the Lutheran John Oecolampadius of Weinberg, or Nikolaos Gerbel? Or did Erasmus make oral and later revision of his own work? It is even possible that the basic text prepared by Erasmus was subject to collaborative revision, and that the 1516 edition was not solely the work of Erasmus.

1 Bishop Marsh, Lectures on the Criticism of the Bible, p. 96 — quoted in Tregelles, Printed Text (1854), p. 8: “Wherever modern Greek manuscripts — 13, 14, 15 century — differ from the most ancient Greek manuscripts, and from the quotations of the early Greek fathers, in such characteristic readings the Complutensian Greek Testament almost invariably agrees with the modern, in opposition to the ancient manuscripts. There cannot be a doubt, therefore, that the Complutensian text was formed from modem manuscripts alone.”

2 F. H. A. Scrivener, Plain Introduction to the Criticism of the New Testament (18944), II, 180. It is relevant to recall that Scrivener was a staunch defender of the Byzantine text.

3 The celebrated case of I John 5, 7 was exceptional, and has left a distorted impression of Erasmus’ work. His edition of 1516 was chiefly a
mile-stone in printing.

The way it is described by Clark, the first edition is mostly from one Greek ms. 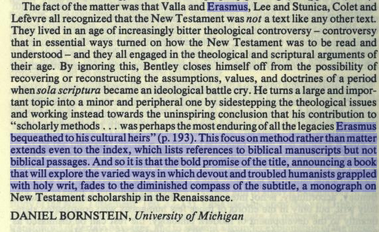 Yielding to the Prejudices of His Times: Erasmus and the Comma Johanneum (2015) 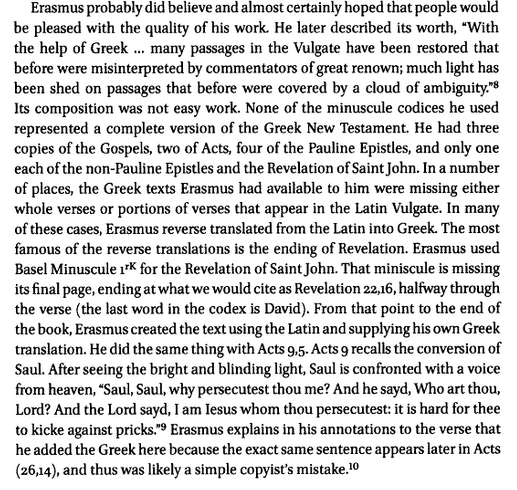 Digitaler Sonderdruck des Autors mit Genehmigung des Verlages.Reconsidering the Relationship between the Complutensian Polyglot Bible and Erasmus’ Novum TestamentumIgnacio García Pinilla (2026)
https://www.researchgate.net/profil...yglot-Bible-and-Erasmus-Novum-Testamentum.pdf
If we were to compare the Polyglot with modern critical editions of the Bible we would notice the following points:
a) it is not possible to identify the peculiar features of any specific family of manuscripts in the Polyglot;
b) since almost none of the Polyglot’s variants are exclusive, it seems that the text was established strictly on the grounds of the readings found in the manuscripts at hand;
c) the proportion of cases where the readings are close to those in the Vulgate is not greater than the contrary, so there is no reason to consider a deliberate attempt to assimilate the Greek text to the Latin.
These three conclusions are taken from the work of Saenz Badillos, who collated several sections of the Polyglot’s New Testament. The latter is especially relevant, since it is the opposite to what Jerry H. Bentley and others have affirmed.14
Last edited: Mar 1, 2021

The Basel 1516: Erasmus' Edition of the New Testament book

That is in Researchgate, it comes from a book that has a number of interesting articles

Note you can see the article names better on the first pages of the Researchgate PDF
https://www.researchgate.net/public...Polyglot_Bible_and_Erasmus'_Novum_Testamentum

ARTICLES CLEARER ON THIS BLOG
https://zwingliusredivivus.wordpress.com/2017/06/23/basel-1516-erasmus-edition-of-the-new-testament/

The Preface, the Mark Vessey article and the beginnings of the Erika Rummel article are here:
https://www.amazon.co.uk/Basel-1516...s-Reformation/dp/3161545222#reader_B08L8HRPF5