Various writers and doctrinal positions used wording that had its source in the heavenly witnesses verse.

You are dancing around on quotes from Eusebius, Hilary and the Symbolem Antiochenum and the Disputation of Athanasius with an Arian at Nicea that all point to the heavenly witnesses.
Then we can add the Vulgate Prologue and Homily 69 from Jerome and Priscillian's text.
Plus the references from Origen's Psalm scholium, Tertullian and Cyprian (a key loci since the arguments against the reference are a joke.)
All leading up the Council of Carthage, where the Bibles of a large Meditteranean region contain the verse, "Arians" ( homoian, some say is a better description) and the Orthodox, who put a special strong emphasis on the verse as Johannine scripture.

Others can be added.

The main interest in this thread is that the unity of agreement idea had some support in the early centuries,
a bit like John Calvin, or as Erasmus referenced would be the Arian counter, and others.
Click to expand...

Erasmus and the Arians: Remarks on the "Consensus Ecclesiae"
James D. Tracy
https://www.jstor.org/stable/25020997
12 LB IX, 353BC: in regard to the disputed text in 1 John 5 concerning the three heavenly witnesses—which Erasmus in 1516 had said was added to the text to refute the Arians—he contends, against Stunica. that the Arians would ‘with equal right’ (pari jure) insist on the reading favorable to their position; even if the genuineness of this passage be granted they would not be ‘so stupid’ as not to realize that it could still be interpreted in a manner congruent with their beliefs, as Augustine himself does in writing against the Arian Maximian: “ ‘The Three are one. that is, they testify to the same thing.’ ” As elsewhere (see below, notes 17, 18), he concludes: “Certe ego, quod negant Arriani, non video posse doceri, nisi ratiocinatione.”

Note that this is supposed to be in the context of the mystical allegorical interpretation.

Erasmus and the Problem of the Johannine Comma
Joseph M. Levine
https://www.jstor.org/stable/3653961?read-now=1&seq=17#page_scan_tab_contents
It is true that Erasmus had pointed out more than once that the Fathers had stretched the meaning of a Biblical text to give it a trinitarian meaning. His friend, Wolfgang Capito, had seen the danger already in 1516 and urged him to soft-pedal.70 What Erasmus himself believed about the Trinity is still a little obscure. He was certainly soft on the Arians, whom he preferred to think of (with Jerome) as schismatic rather than heretical. He saw them in their historical setting, and made some effort to treat them dispassionately, even sympathetically.71 Yet he had no wish to see Arianism revived; as always, he abhorred division, and his own emphasis on the moral and practical purposes of Scripture and religion left him indifferent to metaphysical disputes. “Had I had any authority at those [ancient] synods where the peace of the world was at issue, I would have argued that it were better to profess ignorance of what the words homoousion or homoiousion portend with regard to the divine Persons, rather than either to maintain or attack them at the cost of such great tumult.”72
Last edited: May 17, 2022

John Milton's last thoughts on the Trinity, extr. from 'A treatise on Christian doctrine'
https://books.google.com/books?id=MLoCAAAAQAAJ&pg=PA79

And not only Erasmus, but even Beza, however unwillingly, acknowledged (as may be seen in their own writings) that if John be really the author of the verse, he is only speaking here, as in the last quoted passage, of an unity of agreement and testimony. Besides, who are the three who are said to bear witness ? That they are three Gods, will not be admitted; therefore neither is it the one God, but one record or one testimony of three witnesses, which is implied. But he who is not co-essential with God the Father, cannot be co-equal with the Father. p. 11

This may suffice to convince us that in this kind of threefold enumerations the sacred writers have no view whatever to the doctrine of three divine persons, or to the equality or order of those persons;—not even in that verse which has been mentioned above, and on which commentators in general lay so much stress, 1 John v. 7, “ There are three that bear record in heaven, the Father, the Word, and the Holy Ghost, and these three are one,” where there is in reality nothing which implies either divinity or unity of essence. As to divinity, God is not the only one who is said to bear record in heaven; 1 Tim. v. 21, “ I charge thee before God, and the Lord Jesus Christ, and the elect angels,”—where it might have been expected that the Holy Spirit would have been named in the third place, if such ternary forms of expression really contained the meaning which is commonly ascribed to them. What kind of unity is intended is sufficiently plain from the next verse, in which “the spirit, the water, and the blood” are mentioned, which “are to bear record to one,” or “ to that one thing.” Beza himself, who is generally a stanch defender of the Trinity, understands the phrase unurn sunt to mean, agree in one. What it is that they testify, appears in the fifth and sixth verses—namely, that “ he that overcometh the world is he that believeth that Jesus is the Son of God, even Jesus Christ,” that is, “ the anointed;” therefore he is not one with, nor equal to, him that anointed him. Thus the very record that they bear is inconsistent with the essential unity of the witnesses, which is attempted to be deduced from the passage. For the Word is both the Son and Christ, that is, as has been said, “the anointed and as he is the image, as it were, by which we see God, so is he the word by which we hear him. But if such be his nature, he cannot be essentially one with God, whom no one can see or hear. The same has been already proved, by other arguments, with regard to the Spirit; it follows, therefore, that these three are not one in essence. I say nothing of the suspicion of spuriousness attached to the passage, which is a matter
of criticism rather than of doctrine.
p,. 79-80
Last edited: May 16, 2022

Annotations on the Epistles: Being a Continuation of Mr. Elsley's Annotations, and Principaly Designed for the Use of Candidates for Holy Orders, Volume 2 (1816)
https://books.google.com/books?id=pMYKB4YoBtsC&pg=PA439 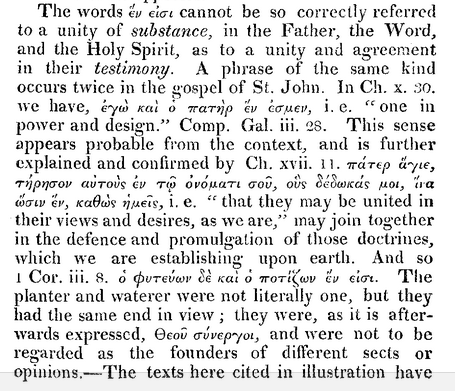 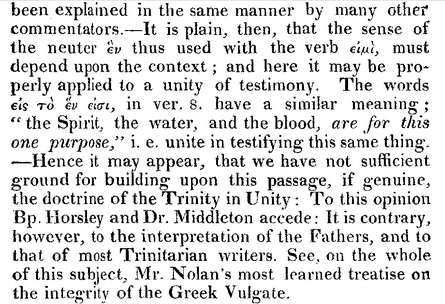