(c) At this point in the discussion of the Greek text underlying the Vulgate it will be appropriate to consider the question how much of the New Testament Vulgate is really Jerome’s work. The commonly accepted opinion has been that, having finished his revision of the Gospels in 384, Jerome performed his work on the rest of the New Testament in a much more cursory manner, leaving much of the Old Latin as he found it.5 During the twentieth century, however, this view was

vigorously opposed by several Roman Catholic scholars. The Benedictine Donatien De Bruyne proposed the astonishing thesis that what is commonly taken to be Jerome’s Vulgate text of the Pauline Epistles is none other than the work of Pelagius.1 The arguments advanced in support of this opinion are chiefly two: (a) in his commentaries, Jerome very frequently quotes with approval a form of the text of the Pauline Epistles which he himself rejected in the Vulgate; and (b) Pelagius not only cites the text of the Vulgate but knew Greek well enough to produce such a version. Next, the Dominican M.-J. Lagrange, while not accepting the role of Pelagius in the production of the Vulgate, argued in such a way as to lead readers to conclude that he denied that Jerome had any part in producing the Vulgate text of Romans and Galatians.2 A few years later, the Jesuit Ferdinand Cavallera went beyond De Bruyne and denied that Jerome had any part in making the Vulgate text of Acts, the Epistles, and the Apocalypse.3

As would be expected, these views did not lack opponents who just as vigorously upheld the traditional view; notable among them were Buonaiuti,4 Mangenot,5 Chapman,6 and Souter.7 In opposition to De Bruyne, Chapman 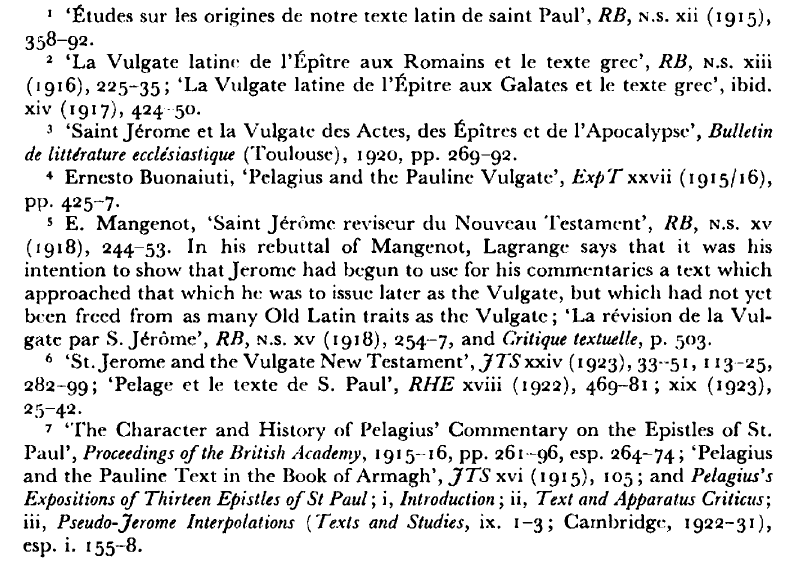 maintained that, at the time Pelagius wrote his commentaries on Paul, he knew no Greek and proposed no Greek variant readings. Furthermore, Souter found reason to believe that the scribe of MS. Augiensis cxix (see below) of Pelagius’ Expositions had replaced the original lemmata with the text of Jerome’s Vulgate. The chief proof that Jerome was then reviser of the entire New Testament, according to Chapman, is the uniformity of the principles according to which the Vulgate text as a whole differs from the Old Latin. In refutation of the argument based on the circumstance that Jerome approves in his commentaries what he rejects in his translation, Chapman argued that: (a) Jerome found reason to change his opinion on certain textual details during the interval between writing his commentaries and the time that Chapman thought he completed his final revision of the Vulgate (a.d. 391); and (b) in other cases Jerome was simply inconsistent in his literary work.

In any case, it appears that the most that can be said with certainty is that the Vulgate text of St. Paul’s Epistles came into being in the closing years of the fourth century at the latest. Its author is unknown, although he is to be identified with the man who gave to the Vulgate at least the Catholic Epistles and per- haps the whole of the New Testament apart from the Gospels. If it be asked why Jerome, having begun with the Gospels, did not continue with the rest of the New Testament, it may well be that Jerome’s zeal for the Hebraica veritas led him to abandon, after the Gospels, his project to revise the entire New Testament.1