Not mentioned in TWOGIG or either Grantley - who is mentioned from Germans, Meyer, et al?

Wilhelm Friedrich Besser ( September 27, 1816 in Warnstedt – September 26, 1884 in Niederlößnitz ) was a German Lutheran theologian and clergyman . 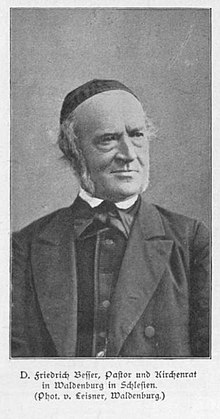 Wilhelm Friedrich Besser was born on September 27, 1816 in Warnstedt, the son of the pastor Johann August Wilhelm Besser (1780–1841). He studied at the University of Halle from 1835 and two years later moved to the University of Berlin .


In 1838 he became Halle Amanuensis of August Tholuck , who had tutored him at the University of Halle. Thanks to the mediation of Ernst Wilhelm Hengstenberg , who, along with Otto von Gerlach , was his most important theological teacher, Besser became both private tutor and preacher in Wulkow . In 1841 he signed the Union Revers , which he revoked in 1845 and as a result lost his office on December 17, 1847. In 1842 he married Jucunde Mühlmann in Halle. He joined the Evangelical Lutheran Church in Prussia and became a pastor in Seefeld in 1848. In LeipzigIn 1853 he took over the office of vice rector of the Evangelical Lutheran Missionary Society . Four years later, in 1857, he became a pastor in Waldenburg, for which he gave up his post as vice rector. In 1858 he married Elise von Erhardt, in 1864 he became a member of the Evangelical-Lutheran Oberkirchenkollegium Breslau .


Better received an honorary theological doctorate from the University of Rostock for his 14-volume work Bible Lessons.