I. De Sabio, 1538.
ONE of the rarest Greek New Testaments known is that printed at Venice, in 1538, by “Io. Ant. de Nicolinis de Sabio” at the expense of Melchior Sessa. An entire copy existed in the Library of the Duke of Sussex; a copy of the second volume (Epistles and Revelation) is in the Bibliotheque Nationale at Paris, and was examined for Reuss by Eugen Scherdtlin; but no complete copy was known to Reuss. A copy having lately come into my possession, I examined it with care, and thought that its peculiarities were worth recording. (continues)
Click to expand... 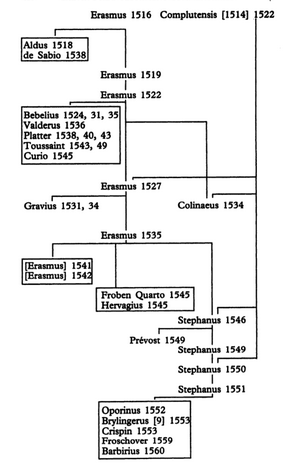 The Basel printer Johannes Bebelius produced three editions (1524, 1531, 1535), based largely on Erasmus’ third edition; Bebelius (or rather his editor, Jacob Ceporinus) omitted the comma in his first two editions, but restored it in the third, perhaps for the same reasons as Erasmus himself. Bebelius’ third edition formed the basis of Johannes Valderus’ edition (Basel, 1536), which in turn served as parent for that of Melchior Sessa (Venice, 1538). Consequently, both Valderus and Sessa provide the comma.3 (Biblical Criticism in Early Modern Europe, pp. 56–57)
3 Hatch 1941.
Click to expand...