brianrw
"Basil (4th century). Greek. Oi pisteuontes eis Theon, kai Logon, kai Pneuma, mian ousan theoteta. Who believe in God, and the Word, and the Spirit, being one Godhead. The value is his departure from the common formula, citing "Word" as opposed to "Son" as it is in 1 John 5:7."
https://www.tapatalk.com/groups/bibleversiondiscussionboard/i-have-no-bible-t2342-s40.html 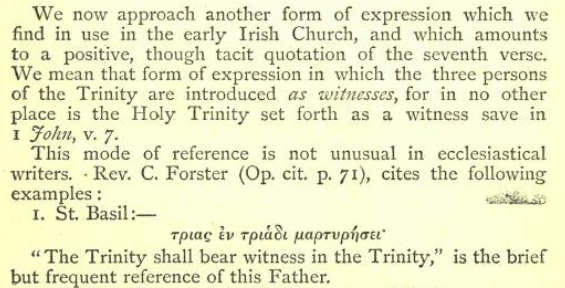 Christian Advocate
"Gleanings and Hints Towards an Argument for the Authenticity of I John v. 7"
Brownlee
http://books.google.com/books?id=_tk2AAAAMAAJ&pg=PA304

● [Against Eunomium. Book 5. Why the Holy Spirit is not also called the Son]
These things are said and they are true, as there are those who are believing truly and faithfully in God, and in the Word, and in the Holy Ghost, the One Deity, the only object of divine worship. We have thought fit to enter into these details so that the idea of a multitude of persons can not slip into the dogma of the Trinity, and that it is well recognized and proven that each of the persons who compose it is one and alone in itself, that there is only one Father, one Son, and one Spirit.

(Basil of Caesarea. Against Eunomium. Book 5, Why the Holy Spirit is not also called the
Son; Migne Greek, PG 29.733C)
Click to expand...

Comment:
[Brownlee] Basil flourished about the middle of the fourth century. The following is a specimen of his striking allusions to our verse, if not rather aa quotation of it: "They believing truly and faithfully in God, and in the Word, and in the Holy Ghost, the One Deity, the only object of divine worship." On this passage Porson has observed, "these words of Basil are indeed very like the verse of John:" he adds, "if these be quotations of 1 John v. 7, no verse has greater plenty of evidence." (Porson's Letters, p. 234). The usual style in which the church expressed her belief in her formulae, was, "we believe in God the Father, and the Son, &c.; but in the above passages out of Basil the peculiar style of John is used, "the Father and the Word." This has induced some to class this among the distinct quotations. We contend not about words, These are evidently allusions by Basil of such a kind as to establish the fact that our verse was as certainly before his eyes, as any other portion of John's epistles.

(Brownlee, "Gleanings and Hints Towards an Argument for the Authenticity of John v. 7" in The Christian Advocate vol 2, July 1825, p. 304)
Click to expand...

Turton looks at Burgess (similar to Brownlee) on Porson
https://books.google.com/books?id=Ve1iAAAAcAAJ&pg=PA33 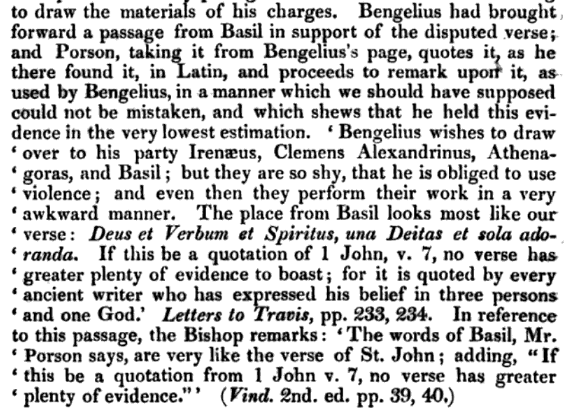 HITS:
● [Against Eunomium. Book 5. If they say that Unless the Holy Spirit from God, neither does the Word come from God.]
3. ... When we still read in the Evangelist that the divine child was begotten by the Holy Spirit (Matt 1:20), we are not led by these expressions to believe that the Holy Spirit came without the Word to give being to the child, since Saint John says that the Word became flesh, and since the incarnation is attributed to the Word. But through all things it is manifest, that both the Spirit is in the Word, and the Word is in the Spirit, the unity according to the Godhead not being divided. The usage of the three Names enumerates and shows forth the Trinity, but the declaration which is according to one Name has the unity of the Trinity. Thus, in this passage from the Epistle to the Romans, all things are of him, through him, and in him (Rom. 11:36), the apostle has enclosed in a single word the peculiar nature of the Father, Son and Holy Spirit. For there is only one God from whom all things come, one Lord Jesus Christ, by whom are all things, and one Holy Spirit, in whom are all things...
(Basil of Caesarea. Against Eunomium, Book 5; Migne Graeca, PG 29.748)

Comment:
[Forster] The example next in order, with like affinity in substance, contains circumstances peculiarly identifying it as a designed and direct reference to the seventh verse. (Migne Graeca, PG 29.748)

1. St. John is the one authority introduced in this passage.
2. The passage, like the seventh verse, treats of the names of the three Persons of the Trinity.
3. St. John alone has ὁ Λόγος, as the name or title of the second Person.
4. ὁ Λόγος is the name here given by St. Basil, in speaking of the names of the Persons in connection with St. John.
5. St. John nowhere connumerates [calls the persons of the Trinity “three”] or connominates [names the three persons] the three Persons, unless it be in the seventh verse.
6. St. Basil certainly here speaks of the three Divine names solely as recorded by St. John.
7. The seventh verse is the only Johnian text in which they are recorded, and the second Person by the exclusively Johnian term, ὁ Λόγος.
8. Therefore, St. Basil's words in this context are unquestionably an appeal to that verse.

Henry Hammond (one ref, and one discussion of Origen)
https://archive.org/details/paraphraseannota04hammuoft/page/467/mode/1up

Middleton agrees with Porson that the Eumonian ref is common
https://books.google.com/books?id=gdRJAAAAMAAJ&pg=PA617