Constantine desires that Alexander and Arius not dispute over the exegesis of a "single passage of scripture."

Arians sing hymn against "three are one" - La Cava - Cavensis "audiat hoc Arius et ceteri" - '...where are they that affirm that the Three are One?'"
https://www.purebibleforum.com/inde...affirm-that-the-three-are-one.1830/#post-7048

We saw from Jerome that the heavenly witnesses was a verse that was creating disputes and discords, in his Psalm 91 homily and in the Vulgate Prologue. There are a number of indications that the verse was central focus, and often surpressed, from the Regensburg manuscript, to the Discipina Arcana, to a special focus on 1 John. And in the Disputation of Arius and Athanasius the verse is referenced.

Even in the time of Constantine, there is a reference to a "single passage of scripture" creating discord between what we today call the Orthodox and the Arians. (Barnes or Stevenson points out that we should not see this anachronistically, by putting the current accepted ideas into Constantine pre-Nicaea.)

"Constantine .. then returned to Nicomedia, where his presence is attested on 25 February 3 323.25 He himself explains the change of plan: he did not wish to see and hear the theological bickering which divided the East.26 The Arian controversy forced itself on his attention just at the period when he most wished to concentrate on converting pagans to Christianity. By 324 not only were bishops denouncing one another, but congregations were divided into two parties, and in the theater pagans taunted Christians about their dissensions.27

Constantine felt a moral duty to intervene in the dispute. He wrote a letter to Alexander and Arius urging them to settle their differences peaceably and entrusted it to Ossius of Corduba, who had probably remained constantly at court since 312.28 In fact, no real possibility of compromise existed. If Constantine hoped to mediate the quarrel, it was because he set a lower value on theological definitions, which he considered pedantic, than on making the Roman Empire Christian.29

The letter which Ossius took to Alexandria repeatedly rebukes Alexander and Arius for quarreling over questions which are of no importance. The bishop ought not to have interrogated his priests about their exegesis of a single passage of Scripture, and Arius ought to have maintained silence; both question and answers were produced by the contentious spirit of idle leisure. Their dispute is far less serious than the Donatist schism which divides Africa.30 For the central doctrines of the divine law are not in dispute, nor has anyone introduced a novel way of worshiping God. Since the debate is a philosophical one, Constantine urges Alexander and Arius to behave like philosophers; their agreement on the main issues far outweighs minor differences, especially because they disagree on a question where the feebleness of the human intellect hinders the clear exposition or apprehension of the truth.31
Click to expand...

Documents of the Early Arian Controversy – Emperor Constantine to Alexander of Alexandria and Arius
http://www.fourthcentury.com/urkunde-17/

6.) I understand that the origin of the present controversy is this. When you, Alexander, demanded of the priests what opinion they each maintained respecting a certain passage in Scripture, or rather, I should say, that you asked them something connected with an unprofitable question. You then, Arius, inconsiderately insisted on what ought never to have been speculated about at all, or if pondered, should have been buried in profound silence.
Click to expand...

TWOGIG
The Emperor Constantine being grieved at the Disturbance of the Churches, sends Hosius the Spaniard to Alexandria,
exhorting the Bishop and Ariusto Reconciliation and Unity.

• When the emperor was made acquainted with these disorders, he was very deeply grieved; and regarding
the matter as a personal misfortune, immediately exerted himself to extinguish the conflagration which had
been kindled, and sent a letter to Alexander and Arius by a trustworthy person named Hosius, who was bishop
of Cordova, in Spain. The emperor greatly loved this man and held him in the highest estimation. It will not be
out of place to introduce here a portion of this letter, the whole of which is given in the life of Constantine by
Eusebius.”Victor Constantine Maximum Augustus to Alexander and Arius. I am informed that your present
controversy originated thus. When you, Alexander, inquired of your presbyters what each thought on a
certain inexplicable passage of the written Word, rather on a subject improper for discussion; and you,
Arius, rashly gave expression to a view of the matter such as ought either never to have been
conceived...”
(Socrates, Ecclesiastical History. Book 1. Chapter 7; NPNF02, vol 2. <www.newadvent.org/fathers/26011.htm>)

• [Burgess] Now, if we consider, that the doctrine of the unity of the Trinity was by Arius accused of Sabellianism, and that, in order to invalidate it, he endeavoured to subvert the Divinity of the Word, it will be evident, that there is only one passage of Scripture which corresponds with these several particulars. There is no other passage but 1 John v. 7, to which Arius could have imputed the opinion of Sabellius ; no other, which teaches, that Three are [PAGE 89] One; no other, which mentions the Word, as one of the Three Persons of the Deity; no other, which could have given occasion to Arius’s denying that the Word was of the same nature and essence with the Father: I conclude, therefore, that the verse of St. John was the passage intended by Constantine, as the ground of the dispute between Alexander and Arius, and the origin of the Arian controversy; and therefore that it was in the Greek text of the fourth century.

(Burgess, A letter to the clergy of the diocese of St. David's on a passage of the second Symbolum Antiochenum of the fourth century as an evidence of the authenticity of 1 John v. 7, 1825, p. 86-89) 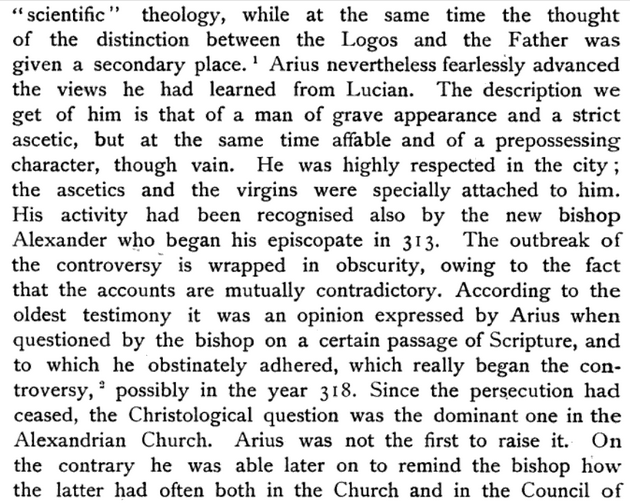 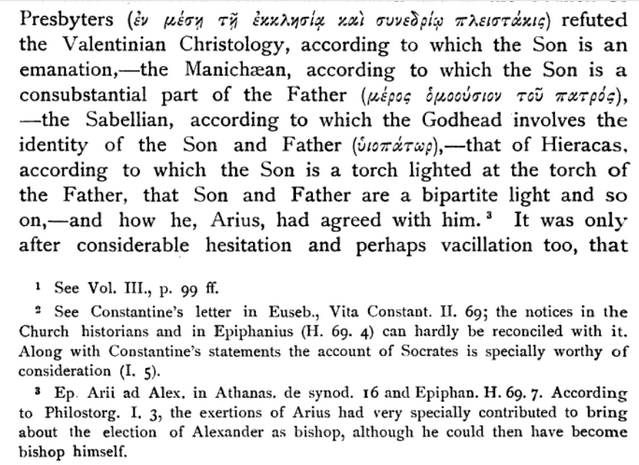 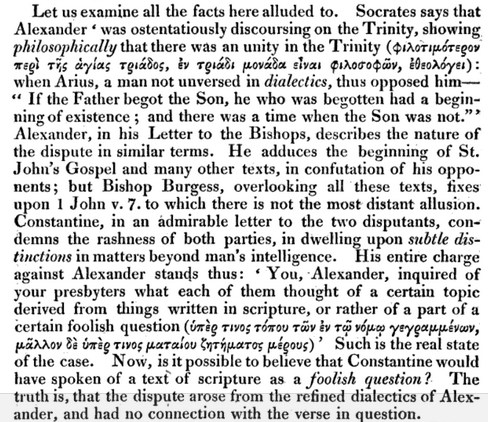