manuscript (Friesing, where the Comma first appears in the 7th century, six hundred years after the original, in any ACTUAL extant non-conjectured NT ms, in any language - anywhere) either before the 7th century or contemporary with this 7th century Comma-inclusive manuscript, across multiple geographic boundaries and languages.
Even if we ditched the Fuldensis because of the Prologue, that's still circa 20 to 1.

Speculum - dated late in Wiki by ms. rather than origin.
Freisinger
Leon Palimpset
==============
Gul
Some further research (hear hear) establishes that the manuscript is nr. 99 of the Weissenburg collection in the Herzog August library in Wolfenbüttel (‘Codex Guelferbytanus 99 Weissenburgensis’). In the seventeenth century, the HAB acquired a large part of the library of the Weissenburg monastery. Cod. Guelf. 99. Weiss. is the so-called ‘Weissenburg Augustine’, containing homilies by Augustine, in which also the Catholic Epistles, the Letters to Timothy, Titus and Philemon, and some other works are found (see Hans Butzmann, Die Weissenburger Handschriften ..., 1964, pp. 283-287).

Weissenburg Abbey in Alsace was founded around AD 650 in the course of the missionary movement emanating from the Franconian Empire, which began with the baptism of the ruler Chlodwig in 498 AD. Initially an outpost on the outskirts of the Christian world, it soon moved to the center of the Frankish empire with the increasing spread of Christianity. Weissenburg was of great religious, economic and political importance among the Carolingians. The monastery flourished in the 9th century under Abbot Grimald, and the library was greatly expanded under him. Many of the manuscripts presented in this exhibition date from this period. In 1523 the monastery was converted into a collegiate monastery, i.e. into a community of canons or canons, and finally dissolved in 1789. A large part of the monastery library came to Wolfenbüttel in the 17th century. <www.hab.de/ausstellungen/weissenburg/einleitung.htm>.

[Duke of Brunswick-Lüneburg : Letter] The fate of the Weissenburg manuscripts after the monastery was converted into a collegiate foundation in the 16th century has not been fully clarified. The majority of the monastery library probably came into the possession of the Sponheim Monastery, or its abbot, the scholar Johannes Trithemius (1462 -1516) before the conversion. From there they came to Cologne and then to Mainz.

[Duke of Brunswick-Lüneburg : Letter] In Mainz around the middle of the 17th century, the manuscripts aroused the interest of Heinrich Julius von Blum (c. 1628-1693), who worked with manuscripts in Prague. After unsuccessful efforts to sell the Weissenburg manuscripts to Duke August, whereby Blum tried to win August's interest by donating a manuscript (Cod. Guelf. 10. 11. Aug. 4 °), Blum began negotiations with his son in 1678 Duke Anton Ulrich. This first approach of Blum to Anton Ulrich was in the form of the letter that can be seen here. Initially, the manuscripts should cost a total of 2,000 thalers (... I will graciously treat myself to an affordability of around two thousand thalers ...). But that was too expensive for the Duke of Guelphs, and so the trade dragged on. It wasn't until 1690 - Blum canceled half of his claim, so that Anton Ulrich was able to acquire the collection for 1,000 thalers - the Weissenburg holdings came to Wolfenbüttel. This happened during the tenure of Casper Adam Stengers, who was the predecessor of Gottfried Wilhelm Leibniz from 1685 - 1690 librarian in Wolfenbüttel.
Letter from Heinrich Julius von Blums to Duke Anton Ulrich von Braunschweig-Lüneburg from 1678.
<www.hab.de/ausstellungen/weissenburg/expo-01.htm>

The Herzog August Library was founded by Julius, Duke of Brunswick-Lüneburg in 1572.[1] In the 17th century it was the largest library north of the Alps. The library was named after Duke Augustus (1579–1666), who greatly enlarged the collection, which was kept at Wolfenbüttel. Armies passed by, back and forth, over the centuries, but the collection was well protected. It was so highly regarded that generals placed the library under special protection, and the library is one of the oldest in the world to have never suffered loss to its collection.[2] In 2006 the library housed around 11,500 manuscripts and 900,000 books, of which 350,000 were printed between the 15th to 18th centuries.[3] Of these, 3,500 are
incunabula, 75,000 are from the sixteenth century, 150,000 are from the seventeenth century, and 120,000 are from the eighteenth century.[2] (Herzog August Library. Wikipedia. <en.wikipedia.org/wiki/Herzog_August_Library>)

[Herzog August Bibliothek] 99. Weissenb, Peryam. 19.5 x 12.5 cm. 154 Bll. 7th-8th Nr. 4183: extremely strange initials, as Bethmann testifies, who expresses himself about the handwriting in the following way: “One of the most beautiful manuscripts of genuinely Merovingian cursives, very remarkable because of the almost completely correct word division and even more because of the extremely colorful and richly decorated initials, the richest that I have ever known from the Merovingian era. Her style is completely Merovingian in color, drawing and composition, with motifs that are mostly taken from fish, and even more from birds, sometimes also from monsters. Particularly peculiar to them is the foliage, which is often used and treated very delicately in almost every initial, and which I have never encountered in this measure or in this way. It almost always represents oak leaves, the birds that occur are mostly peacocks. For the palacography of the initials, this manuscript deserves the highest attention. ”On the second page of the flyleaf, the almost completely extinguished furbige[?] drawing of a triumphal arch encircling a plant. Opposite (f. 1) a similar drawing, depicting a square star with a sun in the middle, over which a hand of the 10th-11th centuries Century wrote
the word: "bethlehem". (Herzog August Bibliothek, Die Handschriften der Herzoglichen Bibliothek zu Wolfenbüttel, Part 2, Issue 5, 1908, p. 317-318)

Codex Wizanburgensis (7th-8th century)
[Knittel] This Codex [99 Mst. Weisenb] is written in the old Franco-Gallic, or Merovingian letters, and was
therefore executed prior to the reign of Charlemagne. Consequently it is false to assert that 1 John V.7 is not
extant in any Latin Codex, hitherto discovered, anterior to the days of Charlemagne. It is also worthy of remark
that this Codex reads "The Spirit is the truth" (Latin: Spiritus est veritas), instead of "Christ is the truth" (Latin:
Christus est veritas). Therefore it cannot be said that the reading "Christus est veritas" is peculiar to, and
uniformly found in, the Latin Version. This Codex also omits "in earth" (Latin: in terra). ...Is the "in heaven"
(Latin: in caelum) a fragment of some antique and semi barbarous Version? Meantime it is evident that, in the
days of Charlemange, there were two recensions of the First Epistle of John. (Knittel, New Criticisms on the
Celebrated Text, 1829, p. 99-100)

The similar Gallican ms. that is said to be omission, same type of script, about the same time.
Both are Guelferbytanus 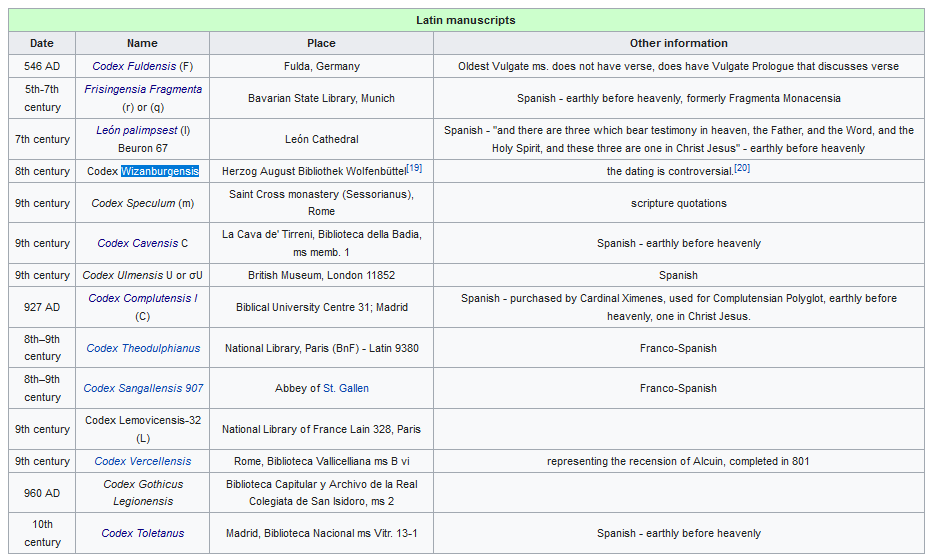