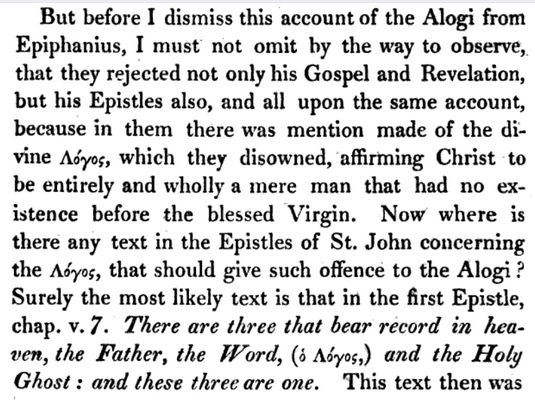 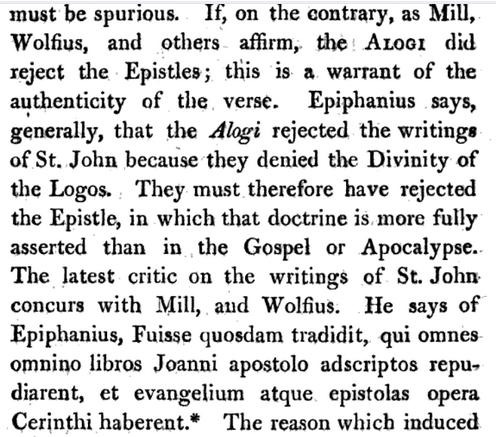 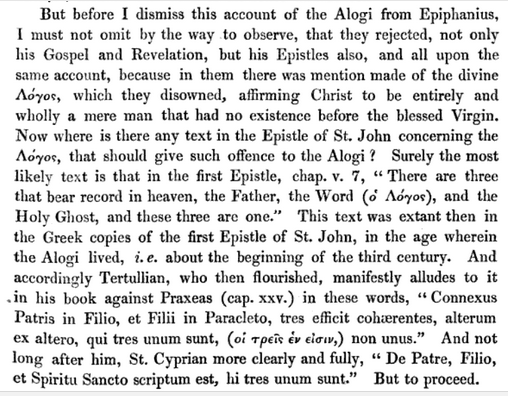 Michaelis
In the second century there arose a sect, to which Epiphanius has given the title of Alogi {1}, because they would not admit the application of the term Logos to Christ. The reason, which they assigned, was, that Cerinthus had applied the term in this manner: whence they argued, that it could not have been thus used by an Apostle. Accordingly, they rejected both St. John's Gospel, and the Apocalypse: and they not only denied, that St. John was the author of these two books, but even ascribed them to Cerinthus. It is evident therefore, that men of this description must have rejected likewise the first Epistle of St. John, if in their time it had contained the controverted passage: for there the term Logos is undoubtedly applied to the second person of the Trinity. If then it can be shown, that the Alogi made no objection to this Epistle, we must conclude, that ch. v. 7. was not contained in the Greek manuscripts, which existed in the second century: for had it been contained in any copies, however few, so remarkable a passage could not have remained unknown to them.

The oldest writer, who has given any account of these persons, is Philastrius, who expressly declares, that they rejected St. John's Gospel, and the Apocalypse; but he says nothing of their rejection of any of his Epistles {1}. The next writer, who has mentioned this sect, is Epiphanius, who collected, with the utmost zeal, all historical information, which he could obtain, against the heretics, and has frequently charged them with more than his information warranted. But in the present instance, though he has asserted, that the Alogi rejected the Gospel of St. John and the Apocalypse, and sometimes speaks in indefinite terms of their rejecting St. John's writings, yet when he mentions St. John's Epistles in particular, he does not say, that the Alogi rejected these likewise; he hints only a private suspicion, that they perhaps did so. I will quote the words of Epiphanius, Haeres. LI. ^3. that the reader may judge for himself.
Last edited: Oct 6, 2021

[Burgess] ...Epiphanius says, generally, that the Alogi rejected the writings of St. John because they [the Alogi] denied the Divinity of the Logos. They must therefore have rejected the Epistle, in which that doctrine is more fully asserted than in the Gospel or Apocalypse. [PAGE 121] ...For the Epistle and the Gospel call the Son of God THE WORD; but the Epistle and the Apocalypse differ a little in their designation of the Son of God, one calling him THE WORD OF LIFE, the other, THE WORD OF GOD. Such concurrence leaves no doubt of their [the Alogi’s] rejection of the first Epistle.
(Burgess, A Vindication of 1 John, V. 7. from the Objections of M. Griesbach: in Which Is Given a New View of the External Evidence, with Greek Authorities for the Authenticity of the Verse, 1823, 2nd edition, p. 119-121)

[Epiphanius] 50.3,1 Now these”Alogi”say (this is what I call them). They shall be so called from now on,and let us give them this name, beloved: Alogi. (2) For they believed in the heresy for which < that* > name < was a good one* >, since it rejects the books by John. As they do not accept the Word which John preaches, they shall be called Dumb.10 (3) As complete strangers to the truth’s message they deny its purity, and accept
neither John’s Gospel nor his Revelation. 50.3,4 And if they accepted the Gospel but rejected the Revelation, I would say they might be doing it from scrupulousness, and refusing to accept an”apocryphon” because of the deep and difficult sayings in the Revelation. (5) But since they do not accept the books in which St. John actually proclaimed his Gospel, it must be plain to everyone that they and their kind are the ones of whom St. John said in his General Epistles, ”It is the last hour and ye have heard that Antichrist cometh; even now, lo, there are many Antichrists.”11 (6) For they offer excuses [for their behavior]. Knowing, as they do, that St. John was an apostle and the Lord’s beloved, that the Lord rightly revealed the
mysteries to him, and < that he* > leaned upon his breast, they are ashamed to contradict him and try to object to these mysteries for a different reason. For they say that they are not John’s composition but Cerinthus’, and have no right to a place in the church. 50.4,1 And it can be shown at once, from this very attack, that they”understand neither what they say nor whereof they affirm.”12 How can the words which are directed against Cerinthus be by Cerinthus? (2) Cerinthus says that Christ is of recent origin and a mere man, while John has proclaimed that < he > is the eternal Word, and has come from on high and been made flesh. From the very outset, then, their worthless quibble is exposed as foolish, and unaware of its own refutation.

(Epiphanius, Panarion, p. 28; Translated by Frank Williams, 2013.)
[Epiphanius] 34,1 Again, in their endless hunt for texts, to give the appearance of discrediting the holy apostle’s books—I mean John’s Gospel and Revelation and perhaps the Epistles as well, for they too agree with the Gospel and Revelation—these people get excited (2) and quote,”I saw, and he said to the angel, Loose the four angels which are upon the Euphrates. And I heard the number of the host, ten thousand times ten thousand and thousands of thousands, and they were clad in breastplates of fire and sulfur and hyacinth.”
(Epiphanius, Panarion, p. 67; Translated by Frank Williams, 2013.)

[Nolan] As far as I can collect from his [St. Epiphanius] words, [PAGE 569] he has implicitly declared that they [the Alogi] objected not less to the Epistles written by St. John, than to his Gospel. (fn. 244. St. Epiphanius expresses himself on the present subject in the following unqualified terms. ...The connexion of the sense, in the last clause of this sentence, apparently renders it necessary that we should suppose the Alogi rejected the Catholic Epistles; and Petavius [D. Petavius, SJ, 2 vols., Paris, 1622; repr. in J. P. Migne, PG 41–3] accordingly renders the first clause; ”but they especially reject the books of John altogether”
(Latin: sed com universos Joannis libros proprie rejiciant, &c.) (Nolan, An Inquiry into the Integrity of the Greek Vulgate, or Received Text of the New Testament, 1815, p. 568-569)
Last edited: Oct 6, 2021