This was planned for posting on the James Snapp blog, which does a fine account of the issue, placed in the third post here.

however, it grew a little bigger than expected, so my post is moved here.

On the Erasmus Promise, the real beginning was Richard Porson:

"It is scarcely necessary to tell the reader, that in the years 1516 and 1519 Erasmus published his first and second editions of the Greek Testament, both which omitted the three heavenly witnesses. That having promised Lee to insert them in his text, if they were found in a single Greek MS. he was soon informed of the existence of such a MS. in England, and consequently inserted 1 John V. 7. in his third edition, 1522. That this MS. after a profound sleep of two centuries, has at last been found in the library of Trinity College, Dublin."

** having promised Lee to insert them in his text **

And this would account for Horne, Tregelles, Scrivener and others using the promise language.

Grantley McDonald tries to take this earlier to Richard Simon:

Simon's account of Erasmus’ decision to include the comma in the third edition of his Greek text contains the first traces of the persistent myth that Erasmus promised to include the comma in his edition of the New Testament if a single manuscript authority could be produced. As Henk Jan de Jonge has pointed out, this legend apparently arose from a misreading of Erasmus’ response to Lee (1520). Erasmus was sure that no Greek manuscript contained the comma. Rather, he was defending himself against Lee’s accusation of laziness and sloppy editing. Simon’s account bears the seed from which the myth of Erasmus’ promise grew:

In his Response to Stunica, Erasmus justified himself well enough by the authority of those Greek manuscripts he had read; yet he considered it acceptable to insert the Passage from St John in a new edition of his New Testament, contrary to the authority of all his manuscripts. He declares that he was only obliged to make this change on the authority of a Greek Copy he had seen in England, which he believed had been adapted on the basis of the Latin copies.

According to Simon, Erasmus felt "obliged", however there really is no intimation of a promise until Richard Porson.

For completeness this page can add William Whiston and Johann Michaelis.

When Lee, upon Erasmus’s putting forth his second edition, fell foul upon him for leaving out the testimony of “the Three in Heaven,” Erasmus answered,

“That he had consulted more than seven Greek manuscripts, and found it wanting in them all; and that if he could have found it in any one manuscript, he would have followed that in favour of the Latin.” Hence notice was sent to Erasmus out of England, that it was in a manuscript there; and thereupon to avoid their calumnies (as he saith) he printed it in his following editions ; notwithstanding that he suspected that manuscript to be a new one, corrected by the Latin. But since, upon inquiry, I cannot learn that they in England ever heard of any such manuscript, but from Erasmus; and since he was only told of such a manuscript, in the time of the controversy between him and Lee, and never saw it himself, I cannot forbear to suspect, that it was nothing but a trick put upon him by some of the Popish clergy, to try if he would make good what he had offered, the printing of the testimony of “ the Three in Heaven,” would have made a greater noise than the rest have done against it. Let those who have such a manuscript, at length tell us where it is.
Click to expand...

Can anything be more slanderous than this? And is it 'negligence' which 'smacks of some impiety' if I did not consult texts to which I could not gain access? I certainly gathered as many as I could. Let Lee produce a Greek manuscript that has written what is lacking in my edition and let him prove that I had access to this manuscript; and then he may accuse me of negligence in sacred doctrines. If he cannot prove it, you see, dear reader, what accusation could be brought against him.

Many more can be added!

Here is a commentary/conclusion on the Henk de Jonge article.

"He (Henk de Jonge) then confesses his own culpability in disseminating the tale (pp. 381, 382), and proceeds to demonstrate learnedly and carefully that the tale is a legend. Acknowledging de Jonge’s research, Metzger admits in a note to the appendix of his lucubration that his statement “about Erasmus’ promise … needs to be corrected” (p. 291, n. 2)."
http://biblekjv.com/cmt/nttxt/nttext17.htm
Click to expand... 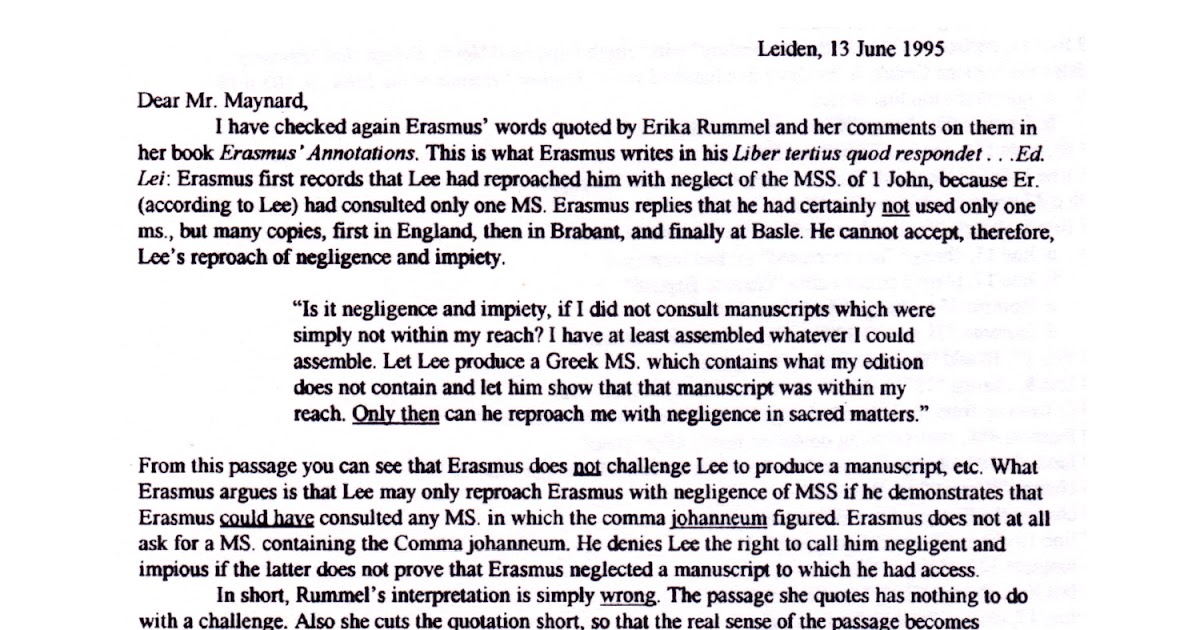 Putting to Rest an Old Canard about Erasmus

Overall, this issue is minor (lots of posturing on all sides) compared to evidences not available at the time of the Erasmus ups and downs, back and forths, on the heavenly witnesses.

One example, the Cyprian usage of the verse in Unity of the Church was keep out of the discussions, and only appeared later in the 1500s.

A second was the Council of Carthage of 484, where the verse was affirmed in the statement of faith given by hundreds of orthodox bishops, contra the "Arian" contingent under Hunneric.

Afawk, this was not available at the time of the Erasmus controversies.
Click to expand...

More can be added, such as his reference to "torquebit grammaticos". Also on the Cyprian usage, Thomas Smith said he was "craftily concealing" the Cyprian evidence. Also Erasmus has truly wild accusations against Jerome on the Vulgate Prologue.

These are examples of far more interesting notes than the Promise issue.
Last edited: Apr 7, 2020

Erasmus’ first (1516) and second (1519) editions of the Greek New Testament did not include the Comma Johanneum in the text of First John. The Comma Johanneum, which refers to the Father, Word, and Holy Spirit as three heavenly witnesses, had become very popular in Europe due to its inclusion in medieval editions of the Vulgate. Some scholars (especially Edward Lee and Jacobus Stunica) protested against Erasmus’ non-inclusion of the Comma Johanneum. The late Bruce Metzger wrote that in response, “In an unguarded moment Erasmus promised that he would insert the Comma Johanneum, as it is called, in future editions if a single Greek manuscript could be found that contained the passage.” James White has similarly stated that “Erasmus had promised, in his response to Lee, to include the passage should a Greek manuscript be found that contained it.”

That story has been circulated by many commentators. (Even Samuel Tregelles spread this story, back in the 1800’s.) However, researcher Henk de Jonge, via a detailed direct study of the relevant compositions, has shown that Erasmus never made the promise described by Metzger, White, and many others. Instead, Erasmus, in a letter written in May of 1520, in the course of explaining why he had not included the Comma Johanneum, stated, “If a single manuscript had come into my hands which attested to what we read [in the Vulgate], then I would certainly have used it to fill in what was missing in the other manuscripts I had.”

Erasmus also stated that Edward Lee did not have a valid reason to accuse Erasmus of negligence in this regard; de Jonge provides Erasmus’ retort: “What sort of indolence is that, if I did not consult the manuscripts which I could not manage to have? At least, I collected as many as I could. Let Lee produce a Greek manuscript in which are written the words lacking in my edition, and let him prove that I had access to this manuscript, and then let him accuse me of indolence.”

Shortly after this exchange between Edward Lee and Desiderius Erasmus, the existence of Codex Montfortianus, and the inclusion of the Comma Johanneum in its text of First John, were pointed out to Erasmus. Erasmus never made a promise to include the Comma Johanneum in a future edition of the Greek New Testament if a Greek manuscript containing it could be found; he merely insisted that he could not validly be accused of omitting it in his first two editions due to negligence, because he had not found it in the manuscripts accessible to him. However, it is also clear that because of Erasmus’ statement that he would have included the Comma Johanneum if he had found it in a single manuscript, Erasmus could easily anticipate in 1522 that if he were to omit the Comma Johanneum in his third edition, after being informed of the existence of a Greek manuscript that contained the passage, he would certainly be accused of inconsistency, having already stated that if he had possessed a single Greek manuscript with the passage, he would have included it.
Click to expand...