homoeoteleuton and the ease of omission

(5.) It was far more easy for a transcriber, by turning away his eye, or by the obscurity of the copy, it being obliterated or defaced on the top or bottom of a page, or worn away in such materials as the ancients had to write upon, to lose and omit the page, than for an interpolator to devise and insert it. He must be very bold and impudent who could hope to escape detection and shame; and profane too, who durst venture to make an addition to a supposed sacred book.
Click to expand...

The various readings in our manuscripts of the New Testament have been occasioned by one of the five following causes,
1. The omission, addition, or exchange of letters, syllables or words, from the mere carelessness of the transcribers.
....

Recourse is had to the dictum of Michaelis that
“we can less easily conceive of the insertion of a passage than of its omission, especially between two words which have the same termination."

But of all causes of omission, there is none which has been so fruitful in results as the eye of the copyist passing from the termination of a word, line, or sentence to a similar termination which might occur soon after: in this manner all the intermediate words were left out of the transcript; such omissions arc styled 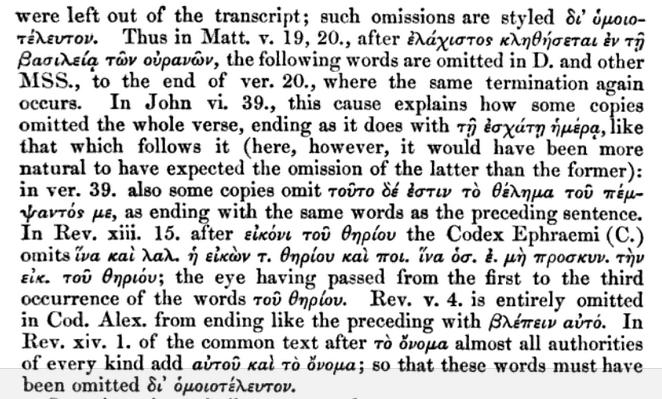 A new plea for the authenticity of the text of the three heavenly witnesses (1876)
Charles Forster
https://books.google.com/books?id=EKwCAAAAQAAJ&pg=PA193
p. 193-199 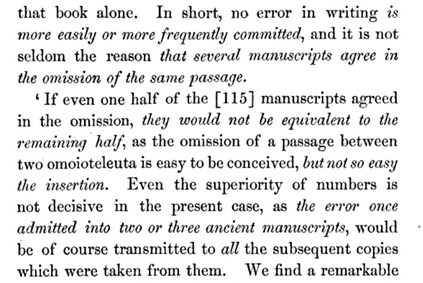 Arthur Tozer Russell
https://archive.org/stream/russelsmemoirs00russuoft#page/n293/mode/2up/
Uses a little-known work
"In truth this class of critics commend upon principle the most ungrammatical and the most improbable readings."
https://books.google.com/books?id=Xt9eAAAAcAAJ&pg=PA282


An Historical and Critical Enquiry Into the Interpretation of the Hebrew Scriptures: With Remarks on Mr. Bellamy's New Translation (1819)
John William Whittaker,
https://books.google.com/books?id=HJVhAAAAcAAJ&pg=PA38

The highest value has always been attached to our translation of the Bible. Sciolists, it is true, have often attempted to raise their own reputation on the ruin of that of others, and the authors of the English Bible have frequently been calumniated by charlatans of every description, but it may safely be asserted, without fear of contradiction, that the nation at large has always paid our translators the tribute of veneration and gratitude which they so justly merit. Like the mighty of former times, they have departed and shared the common fate of mortality, but they have not, like those heroes of antiquity, “ gone without their fame,” though but little is known of their individual worth. Their reputation for learning and piety has not descended with them to the grave, though they are there alike heedless of the voice of calumny, and deaf to the praise which admiring posterity awards to the memory of the great and good. Let us not therefore too hastily conclude that they have “ fallen on evil days and evil tongues,” because it has occasionally happened that an individual, as inferior to them in erudition as in talents and integrity, is found questioning their motives, or denying their qualifications for the task which they so well performed. Their version has been used ever since its first appearance, not only by the Church, but by all the sects which have for-
Click to expand...

Matthew 27:35 (AV)
And they crucified him, and parted his garments, casting lots:
that it might be fulfilled which was spoken by the prophet,
They parted my garments among them,
and upon my vesture did they cast lots.