The key fact is that invisible allegory is a special-pleading theory that was only created as a tool to try to counter the Cyprian evidence in the heavenly witnesses. (Later expanded to also include Potamius.)

(See the Knittel discussion of Cyprian for examples, and there is Augustine and Facundus and others, and outside the heavenly witnesses dozens more.)

If a writer wrote in that manner, changing scripture to mean words totally different :

the writer would look like a total fool. The readers would go to that spot to confirm the words, and see that the writer, Cyprian, was simply making things up. The context he said, of The Father, Son and Holy Spirit, was simply not there.

The same would occur with Potamius writing in his book and to Athanasius and saying of the Father, Son, and Holy Spirit, "and the three are one". He would like at best like a fool, or a charlatan and deceiver.

This is why invisible allegory is a theory of interpretation that never occurs!

Here is the problem with your interpretation. First, we know from Priscillian that the heavenly witnesses was in the Latin Bible of the day, even the locale is the Iberian Peninsula for both men. Both Potamius and Priscillian say specifically that they are quoting John, as do many references in De Trinitate, thought by some to be around the same time, pointing to Eusebius of Vercelli.

There are numerous other confirmations of the Latin lines having the verse from early days, such as Cyprian, and the Vulgate Prologue of Jerome and the hundreds of orthodox at the Council of Carthage.

So why do we start theorizing the very difficult idea of invisible allegorizing? In such an allegorizing, the reader really has no idea how somebody went from point A to point Z.

And I believe the theory of invisible allegorizing was invented to hand-wave the evidences that point to heavenly witnesses authenticity.

Bart Ehrman (he should listen to this)
https://ehrmanblog.org/how-the-trinity-got-into-the-new-testament/

... I don’t know of any place where “water'” is a symbol for God. In the OT, for example, water is often the entity *opposed* to God, that God has to overcome for the salvation of his people. (Genesis 1 — he overcomes water by putting in the firmament; 6-9 water threatens the human race; exodus, the sea must be conquered for savltion , etc.)
Last edited: Jun 8, 2021

matt13weedhacker is completely ignorant of the invisible vs. explanatory allegory issue, and comes up with a bunch of nothing.
https://www.tapatalk.com/groups/bib...nty-new-york-world-clas-t5868-s10.html#p82003

Ironically, he includes his own "..." to try to make the nothing.

matt, why not show us all the allegories, invisible or explanatory.
Last edited: Jun 8, 2021

ADD Ehrman and the invisible allegorizing two posts above.

It almost looks like you are preferring to follow the pseudo-consensus scholarship declarations rather than search out the actual evidences. Those declarations, since the Schepss discover of 1886, focus on Priscilliian. Earlier other works, like De Trinitate.

While some scholars, like Scrivener, acknowledged that Cyprian was utilizing the verse, "safer and more candid".

Let's focus on just Potamius (not referenced by Raymond Brown or Bruce Metzger) and Priscillian. Priscillian tells us specifically that the full verse was in his Bible at 385 AD, from John (allowing the quirky variants). He did not originate the verse, he said it was in his Bible. Maybe it was in that Latin Bible line for 5 years, or 50, or 300 years.

So Potamius says it was in his Bible as well, 360 AD. The invisible allegorizing theories really have no traction, Potamius was not a trickster trying to fool Athanasius and his other readers, he simply had "the three are one" referencing the Father, Son and Holy Spirit, the heavenly witnesses. Let's allow him to be speaking honestly.

Council of Carthage, 484, hundreds of bishops affirming the verse, from the wide Meditteranean region in their Old Latin Bibles.

Robertus above, quoting Erasmus:
“My mind is so excited at the thought of emending Jerome’s text, with notes, that I seem to myself inspired by some god. I have already almost finished emending him by collating a large number of ancient manuscripts, and this I am doing at enormous personal expense.”

Fantastic quote.
Checking, it is from Epistle 273, and is quoted on the net some.

However, a distinction should be made clear. Erasmus was emending Jerome's text, to improve the Latin.

His fourth edition of 1527 had the two Latin texts. Bold. And it would be interesting to see 10+ major variants where his Latin differed from the Vulgate in that edition. Has that scholarship been done?

That does not mean that Erasmus put any effort into a tabula rasa Greek to Latin translation. (I think that is the gist of your post.) Erasmus still started with the Vulgate text and made the improvements. At least, that is how it all sounds to me! A fresh translation would be radically different.

Here is an interesting section where Erasmus talked to Martin Dorp about the Latin text:

How the Trinity Got Into the New Testament: Part 2​ 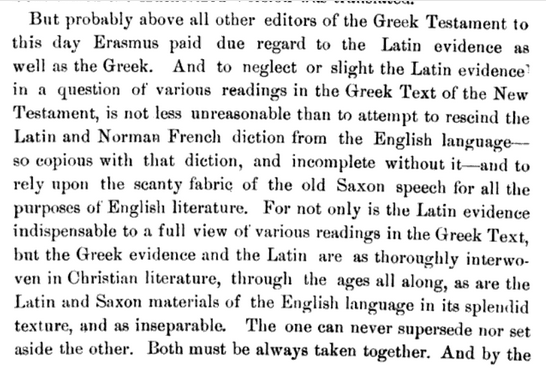 The theory of invisible allegorizing slipped in quietly in the heavenly witnesses debate.
And I have not seen it used in any other spot in Biblical studies.

The classic is Cyprian, 3rd century, The Unity of the Church (Trinity is not the topic.)

The Lord says, "I and the Father are one"
and again it is written of the Father, and of the Son, and of the Holy Spirit,
"And these three are one."

This is a very difficult reference to fit in with modern theories. E.g. if it is acknowledged that Cyprian is speaking of the heavenly witnesses, all the theories of the verse being created in the Arian controversies of the 4th century go out the window. And all the emphasis on Priscillian being the first witness goes kaput. Once those knee-jerk argumentative props are gone, the honest searcher will begin to review the full-orbed evidence for authenticity. Tabula rasa time.

Scrivener was at least honest enough to say that it is "safer and more candid" to acknowledge that Cyprian is giving a reference to the heavenly witnesses. Walter Thiele offered a similar approach, that the verse was in Cyprian's Bible, and that it even came over from the Greek. Franz Pieper truly understood the significance, and his acceptance of the verse used Cyprian as the authenticity fulcrum.

By creating the monstrous fiction of the invisible allegory, the heavenly witnesses contras have stuck to their guns, without a care in the world about how absurd is their claim.

Once the fiction of invisible allegorizing had become normative in the often dull thinking textual criticism world, with lemming repetition, it could be applied in a dozen spots. Grantley McDonald in Raising the Ghost of Arius applied it to 13 evidences at once!

Thus invisible allegorizing is the normal hand-wave for Potamius. (Not emphasizing Andrew, who at least wrote in an equivocal, questioning fashion.)
Click to expand...

Potamius says that he was reading from John, which would be his Bible,e g.:

Letter on the Substance of the Father and the Son and the Holy Spirit.
3. With good reason John asserts: 'and the three of them are one'
'Substance' is the expression of a single entity.

The context is clear, and remember, Prof Ehrman, you showed a lot of skepticism about invisible allegorizing theories.

... I don’t know of any place where “water'” is a symbol for God. In the OT, for example, water is often the entity *opposed* to God, that God has to overcome for the salvation of his people. (Genesis 1 — he overcomes water by putting in the firmament; 6-9 water threatens the human race; exodus, the sea must be conquered for salvation , etc.)

Maybe we are in agreement that Potamius should receive the simple, clear reading.

Of course this is not an invisible allegory. Had a little slip, thanks for the BVDB correction.

So the earliest absurd invisible allegory is the claim with Cyprian.

Augustine and a wide-ranging use of explanatory allegory

Certain medieval solutions of the Trinitarian problem: analogies and the mathematical approach
https://www.academia.edu/9562127/Ce...oblem_analogies_and_the_mathematical_approach 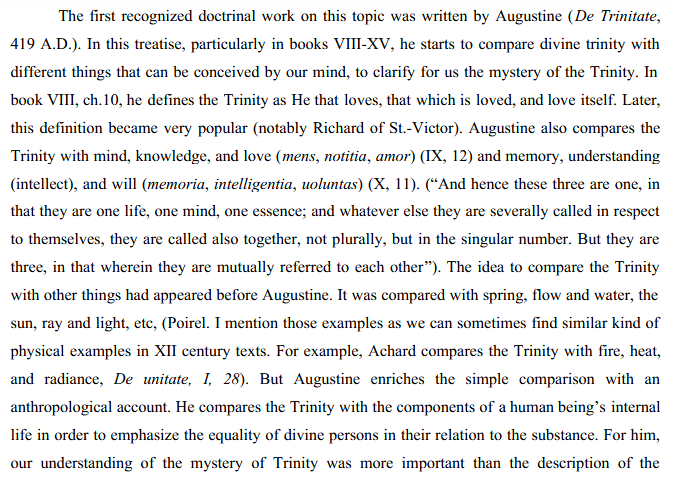 By searching out those Latin words, we can find additional studies on the Augustinian explanatory allegories. 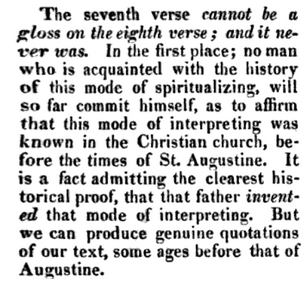 We have the spot where Grantley blundered claiming everything was simply allegory of the v. 8 earthly witnesses.

That leads to the fact that the contras do not understand that invisible allegory is rare and totally different than explanatory allegory.

They CONTINUE to be totally clueless to the simple fact that an invisible allegory ... does not exist!

"Even though in chapter 7, Cyprian allegorizes the passage about Christ's garment and uses several allegories (Noah's Ark, wife, sons, adulterers etc) at the start of chapter 6."
https://www.tapatalk.com/groups/bib...ty-new-york-world-clas-t5868-s140.html#p82631

Their minds are mush .

100 explanatory allegories does not have ANYTHING to do about the supposed invisible allegory.

It is a joke coming from the fellow at CARM, and the same joke from the BVDB mush folks.
Last edited: Sep 26, 2021

Henry Thomas Armfield
"a certain mystical interpretation which he (Cyprian) has not given or alluded to, of a verse which he has not quoted!"