Joseph Bryennios
https://en.wikipedia.org/wiki/Joseph_Bryennios
Joseph Bryennios (Greek: Ἰωσήφ Βρυέννιος) was a learned Byzantine monk of the 15th century. He was a monk at the Monastery of Stoudios. He wrote many important works of scholarship in support of Orthodoxy, and against the Union of Churches. He died sometime between 1431 and 1438.

Steven Avery That material is originally taken from the article in: 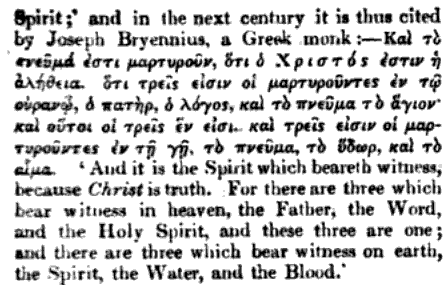 In his section in BIblical Hermeuntics, Wright says it "betrays symptoms of its Latin origin.

Biblical Hermeneutics, Or, The Art of Scripture Interpretation
https://books.google.com/books?id=1J4XAAAAYAAJ&pg=PA617

One point is that it does not have for the earthly witnesses "these three agree in one", which is following the Latin Lateran Council style.
Plus it has a Latin variant in v. 6, "for Christ is the truth".

Nick added the picture of the section.
The exact text and translation issue, and context, is still up in the air.

Thomas Turton raises a ms. issue, going back to Matthaei
This is not in his Vindication, 1827.

Seiler, given by Grantley, is actually William Wright, who as the translator added this section to the edition.
https://books.google.com/books?id=asYtAAAAYAAJ&pg=PA617

The comma was also cited by two Byzantine writers in the context of the debate with the Latin church: Emmanuel Calecas († 1410) and Joseph Bryennius (c. 1350-c. 1431/38). .... Bryennius by contrast, a strident opponent of union with Rome, translated the comma as he found in the Latin Vulgate, including two of its divergances from the Greek text: the reading “for Christ is the truth” in 1 Jn 5:6, and the omission of the concluding clause of 1 Jn 5:8.115