Thirteen Sermons Concerning the Doctrine of the Trinity: Preach'd at the Merchant's-lecture, at Salter's Hall (1722)
Edmund Calamy
https://books.google.com/books?id=WhwtAAAAYAAJ&pg=PA481 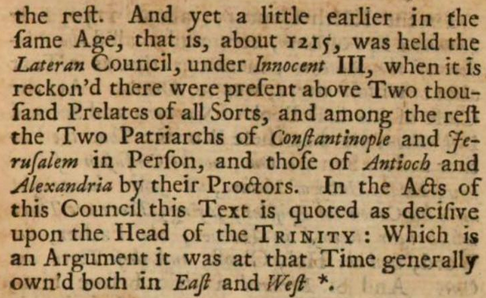 And yet a little earlier in she same Age, that is, about 1215, was held the Lateran Council, under Innocent III, when it is reckon'd there were present above two thousand Prelates of all sorts, and among the rest the Two Patriarchs of Constantinople and Jerusalem in person, and those of Antioch and Alexandria by their Proctors. In the Acts of this Council this Text is quoted as decisive upon the Head of the Trinity : Which is an Argument it was at that Time generally own'd both in East and West *.
Click to expand...

(continues with Simon and Martin as to whether the Brittanicus ms. used the Lateran wording)

This great council was attended by the Patriarchs of Constantinople and Jerusalem; and by the proxies of the Patriarchs of Antioch and Alexandria, and by the representatives of the Eastern churches; whose concurrence in these acts, is no mean proof that the authenticity of the seventh verse was allowed by them in the thirteenth century.
Last edited: Aug 31, 2021

"For the faithful of Christ, he says, are not one in the sense that they are some one thing that is common to all, but in the sense that they constitute one Church by reason of the unity of the Catholic faith and one kingdom by reason of the union of indissoluble charity, as we read in the canonical Epistle of St. John: "There are three who give testimony in heaven, the Father, the Word, and the Holy Ghost; and these three are one" (I John 5: 7). And immediately it is added: "And there are three who give testimony on earth, the spirit, the water, and the blood; and these three are one" (I John 5: 8), as it is found in some codices." (The Canons of the Fourth Lateran Council, 1215)
http://www.kjvtoday.com/home/the-fa...rank-disclosure-by-the-Fourth-Lateran-Council

We therefore condemn and reprove that small book or treatise which abbot Joachim published against master Peter Lombard concerning the unity or essence of the Trinity, in which he calls Peter Lombard a heretic and a madman because he said in his Sentences, “For there is a certain supreme reality which is the Father and the Son and the holy Spirit, and it neither begets nor is begotten nor does it proceed”. He asserts from this that Peter Lombard ascribes to God not so much a Trinity as a quaternity, that is to say three persons and a common essence as if this were a fourth person. Abbot Joachim clearly protests that there does not exist any reality which is the Father and the Son and the holy Spirit-neither an essence nor a substance nor a nature — although he concedes that the Father and the Son and the holy Spirit are one essence, one substance and one nature. He professes, however, that such a unity is not true and proper but rather collective and analogous, in the way that many persons are said to be one people and many faithful one church, according to that saying : Of the multitude of believers there was one heart and one mind, and Whoever adheres to God is one spirit with him; again He who plants and he who waters are one, and all of us are one body in Christ; and again in the book of Kings, My people and your people are one. In support of this opinion he especially uses the saying which Christ uttered in the gospel concerning the faithful : I wish, Father, that they may be one in us, just as we are one, so that they may be made perfect in one. For, he says, Christ’s faithful are not one in the sense of a single reality which is common to all. They are one only in this sense, that they form one church through the unity of the catholic faith, and finally one kingdom through a union of indissoluble charity. Thus we read in the canonical letter of John : For there are three that bear witness in heaven, the Father and the Word and the holy Spirit, and these three are one; and he immediately adds, And the three that bear witness on earth are the spirit, water and blood, and the three are one, according to some manuscripts.
https://www.papalencyclicals.net/councils/ecum12-2.htm

It looks like "some manuscripts", or "some codices"
"in quibusdam codicibus invenitur"

refers to the phrase on which Joachim Flores and Thomas Aquinas disagree:

"and the three are one". 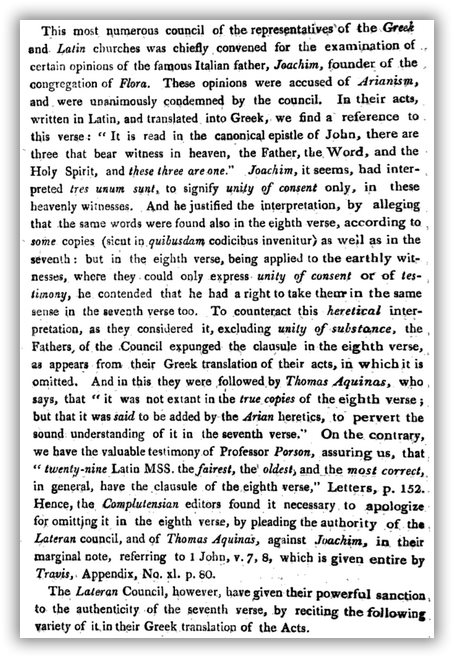 RGA wrongly thinks this is a reference to the full heavenly witnesses:

"But for our purposes, a more interesting detail is the Council’s concession that the Johannine comma is only to be found “in certain codices” (in quibusdam codicibus invenitur)."

This is omitted from BCEME, perhaps Grantley realized that the reference was not to the heavenly witnesses.
Last edited: Aug 31, 2021

A reply to the objections of Robert Nelson, esq: and of an anonymous author [i.e. James Knight ] against Dr. Clarke's Scripture-doctrine of the Trinity. Being a commentary upon forty select texts of scripture. To which is added, An answer to the remarks of the author of, Some considerations concerning the Trinity, and the ways of managing that controversy

This James Knight one has a special note about authorship in BCEME.

BCEME
Another challenge came from James Knight, who defended the comma and the doctrine it summarised, arguing that it was cited by both Tertullian and Cyprian, who interpreted it as referring to ‘not a bare Unity of Testimony, but of Substance’.318

[Knight, James]. The Scripture Doctrine of the Most Holy and Undivided Trinity Vindicated from the Misinterpretations of Dr. Clarke. To Which Is Prefixed a Letter to the Reverend Doctor, by Robert Nelson, Esq. 2nd ed. London: Smith, 1714.

The True Scripture Doctrine of the Most Holy and Undivided Trinity, Continued and Vindicated From the Misinterpretations of Dr. Clarke. In Answer to his Reply. By the Author of the Scripture-Doctrine. Published and Recommended by Robert Nelson, Esq. London: Smith, 1715.
Click to expand...

This agrees with William Hales above.

A reply to the objections of Robert Nelson, esq: and of an anonymous author [i.e. James Knight ] against Dr. Clarke's Scripture-doctrine of the Trinity. Being a commentary upon forty select texts of scripture. To which is added, An answer to the remarks of the author of, Some considerations concerning the Trinity, and the ways of managing that controversy (1714)
Samuel Clarke
https://books.google.com/books?id=PlxiAAAAcAAJ&pg=PA209 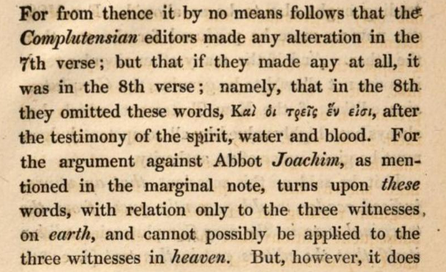