The Letters of Peter Damian
https://books.google.com/books?id=9smLdu9BvK0C&pg=PA227

RGA - p. 57
Given the increasing frequency with which the comma occurs in Latin bibles from the eleventh century onwards, it is not surprising to find it quoted by mediaeval writers such as Peter Damian (c. 1007-1072),84

Peter Damian (1007-1073 AD)
Peter Damian (Latin: Petrus Damianus; Italian: Pietro or Pier Damiani; c. 1007 – 21 or 22 February 1072 or 1073)[1] was
a reforming Benedictine monk and cardinal in the circle of Pope Leo IX. Dante placed him in one of the highest circles of
Paradiso as a great predecessor of Saint Francis of Assisi and he was declared a Doctor of the Church in 1828. His feast
day is 21 February.

Peter was born in Ravenna around 988[2], the youngest of a large noble, but poor family. Orphaned early, he was at first adopted by an elder brother, who ill-treated and under-fed him while employing him as a swineherd. After some years, another brother, Damianus, who was archpriest at Ravenna, had pity on him and took him away to be educated. Adding his brother's name to his own, Peter made such rapid progress in his studies of theology and canon law, first at Ravenna, then at Faenza, and finally at the University of Parma, that, around the age of 25, he was already a famous teacher at Parma and Ravenna.[3]

Extending the area of his activities, he entered into communication with the Emperor Henry III. He was present in Rome
when Clement II crowned Henry III and his consort Agnes, and he also attended a synod held at the Lateran in the first
days of 1047, in which decrees were passed against simony.[5] After this he returned to his hermitage. Damian published
a constant stream of open letters on a variety of theological and disciplinary controversies. About 1050, he wrote Liber
Gomorrhianus addressed to Pope Leo IX, containing a scathing indictment of the practice of sodomy, as threatening the
integrity of the clergy. Meanwhile, the question arose as to the validity of the ordinations of simoniacal clerics. Peter
Damian wrote (about 1053) a treatise, the Liber Gratissimus, in favor of their validity, a work which, though much
combatted at the time, was potent in deciding the question in their favor before the end of the 12th century. Pope Benedict XVI described him as "one of the most significant figures of the 11th century ... a lover of solitude and at the same time a fearless man of the Church, committed personally to the task of reform."[6]
Peter Damian.
Wikipedia. <en.wikipedia.org/wiki/Peter_Damian>

HIT:
● [Letter 10] And now, if I may point to the most outstanding prerogative that I have enjoyed, when the Lord hung on the cross, it was I who flowed from the side of my Creator and, in association with his precious blood, hallowed the earth and the heavens. In consequence the apostles John says: "This is He who came by water and blood, Jesus Christ." (1 John 5:6) and a bit later he adds: "There are three witnesses in earth: the Spirit, the water, and the blood." (1 John 5:8) After giving close attention to everything included above, moreover, you should regard all the other elements that depend on me.

This one needs to be unraveled. 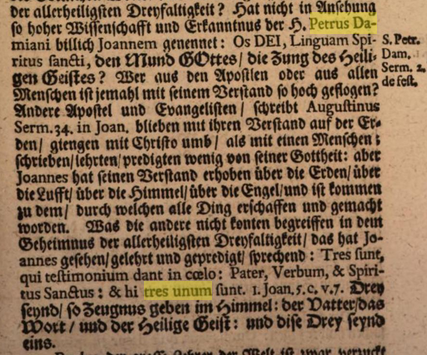