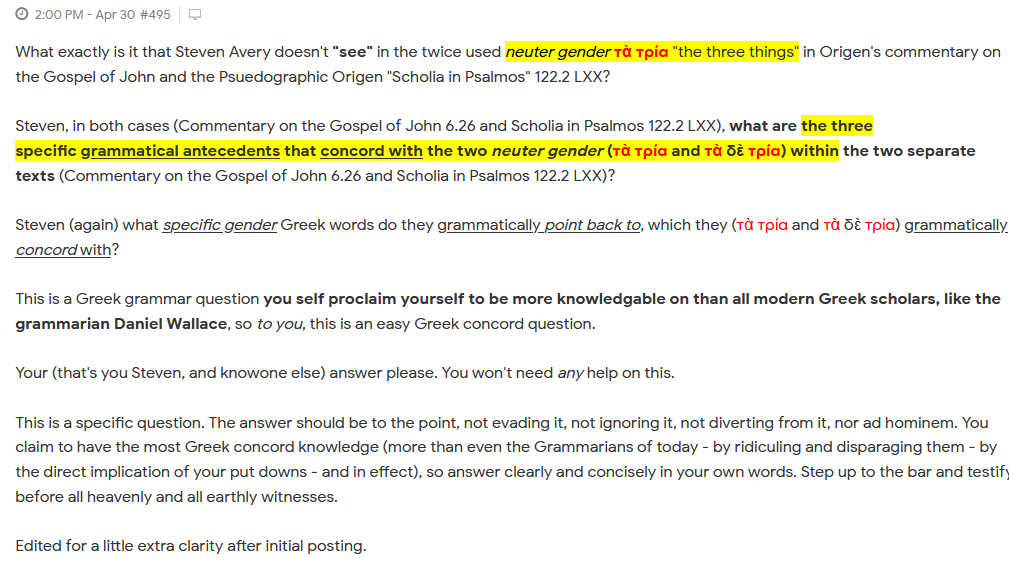 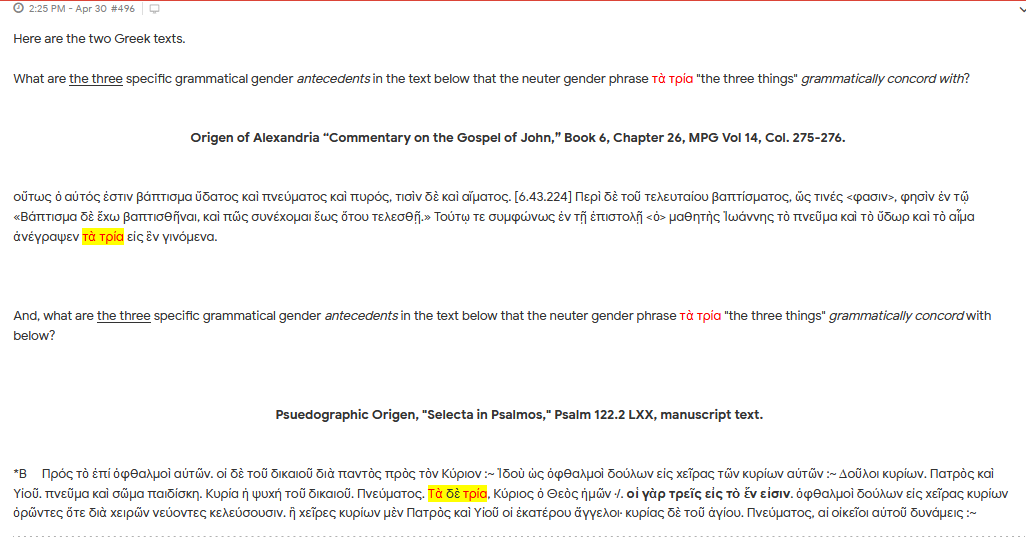 Even after telling them again and again, even after quoting Eugenius Voulgaris, these grammatical fools do not understand that the solecism in the heavenly witnesses is only a grating discordance that arises with masculine grammar and neuter nouns. (Or, conceptually, feminine grammar.)

There is NO analogy above. It is all worthless, its only use is to show the ignorance of JW Matt from NZ.

Ignorance and posturing. Quite a combination.

Later, we can bring over, or point to, the other material from Euthymius and Bill Brown. We can also add the Hofstetter and Snapp worthless analogy attempts.

If Matt thinks they are analogous, simply show the text in Greek and English, show the masculine grammar and show the neuter antecedent nouns. Then we can look for a comparable solecism to the short text of 1 John 5:8.

Matt will not answer.

Matt is more Trickster than Fool.

Euthymius asked a reasonable question about pneuma in the Gospel of John, was backed by a dumb post by bluster Bill, and was fully answered here in 2 posts.
https://www.purebibleforum.com/inde...tantives-confuses-james-snapp.1783/#post-6899

He does not understand and/or will not acknowledge. He did fool James Snapp.

He is the King of the BVDB Grammatical Fools.

If Matt thinks something in Origen is analogous, simply show the text in Greek and English, show the masculine grammar and show the neuter antecedent nouns. Then we can look for a comparable solecism to the short text of 1 John 5:8.

He makes one true point —

refuting the argument that the rules changed from John to Voulgaris and Babiniotis.

We now have from Matt at least 8 posts, in a row, that say absolutely nothing.

However I have explained to Matt why neuter grammatical antecedents are irrelevant.
Nine nothing, incompetent posts. As he does more, I will just note it on this post,

Nine posts - and Matt still cannot put together a grammatical argument or analogy.

"The servants of their masters,
the Father and the Son, are the body and spirit;
and the handmaid of her mistress, the Holy Ghost, is the soul;
and the three are the Lord our God;
for the three are into one"

Matt twists himself into a pretzel, trying to find:
mystically symbolizing or allegorically representing
of Matthew 28:19, combined with the earthly witnesses.

You can try to get anything you want, at the weedhacker restaurant.

this is fun because it shows how dumb is Bill Brown

SA
the solecism in the heavenly witnesses is only a grating discordance that arises with masculine grammar and neuter nouns. (Or, conceptually, feminine grammar.)

Bill Brown
So....it's a solecism involving ALL THREE GENDERS, even you just said so but you're too stupid to actually understand what you write.

wow, Bill gloats that he can count to 3, and still has no idea what is the actual discordance!

Bill Brown
He has gone right back to listing Colbertinus as an OL manuscript for the CJ.

Simply reprinting the 2014 info.
And that was taken from the apparatus showing the mss. with the verse.

It was not part of a presentation, it is analysis in process.

Colbertinus is an Old Latin ms.

Do we look at the the text of the verse to see if the style is more Vulgate or Old Latin?
We could, but it does not change the simple fact above.

Sinaiticus and even Vaticanus have sections or books that may be called Western, or some other style, rather than Alexandrian.

However, they are always able to be called Alexandrian mss., whatever the book, section or verse.
Last edited: Jun 1, 2021

So Bill Brown, please give me a list of all the hybrid Latin manuscripts that are mixed, and are not in the Old Latin or Vulgate groupings.
Thanks!

btw, if the Old Latin uses one word and the Vulgate uses another, that is easy to see.

And where does Metzger reference the early Old Latin manuscripts in his supposed analysis of the heavenly witnesses?
They all support the verse.
Last edited: Jun 2, 2021

So in many posts the BVDB folks have made a case that the text in Colbertinus should be considered Vulgate. This effects very little since other than repeating the apparatus information from 2014 here for research purposes.
https://purebibleforum.com/index.php?threads/old-latin-summary.1887/

We do not use Colbertinus as an example of how the Old Latin mss. support the heavenly witnesses as original.

There are some complications on the Leon (leon2 is said to be a margin mss.) and the Harl mss. So if the BVDB folks want to go through each one, that is fine, efforts appreciated.

Including Potamius of Lisbon referencing the verse from John in 4 quotes about decades before there was a Latin Vulgate, one writing to Athansaius

Note: the Metzger and Wallace dupes will have these sources hidden or misrepresented. Cassiodorus c. 550 was the first writer who really used the Vulgate and the Greek to update the Old Latin.

it-p Perpignan (said to be a copy of a 6th century OL)
The readings of the Perpignan MS, Paris Bibl. Nat. Lat. 321, which differ from the Old Latin text printed here and which are not Vulgate readings, have been added (under the symbol “p”) in the Critical Notes from the text of the Catholic Epistles, published by the Rev. E. S. Buchanan in the Journal of Theological Studies, xii. 48 (July 1911). The agreements of this MS in the First Epistle of S. John with Augustine and with the Speculum are of considerable interest. The form in which it gives the text of 1 John 5:7, 1 John 5:8 is very close to that of one of the quotations in the Speculum. - Brooke 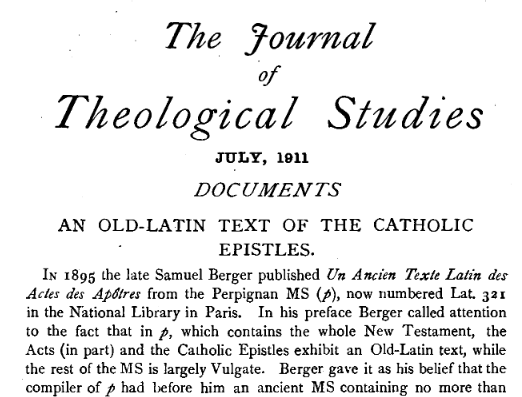 one contra, to date the main one, but it looks like it should be removed from Old Latin and put in the Vulgate section!
"It contains text of Vulgate, but there are many Old Latin readings in the Acts and Pauline epistles" - Metzger

If the fellas want to give more info these four, go right ahead!

Sick Bill Brown
"you didn't bother to disclose this on ETC which is where I was responding to your pile of nonsense. "

Sick Bill, wake up.
All the quotes for Potamius were and are at the url link in the post.
Four quotes, English followed by Latin.

(plus a lot of additional info on the page.)

What reason in heaven or on earth could there be for him NOT TO USE “Quoniam tres sunt, qui testimonium dant in cælo : Pater, Verbum, et Spiritus Sanctus” (KJV-numbering verse 7-Part-A-to-C) IN THE CONTEXT that he's arguing Mr Avery?
Click to expand...

Potamius already mentioned the Father, Son and Holy Spirit. It would be redundant. And his emphasis was simply on the three are one. He has no command to follow your demands 1650 years later.

Sick Bill Brown
"You didn't PUT THE QUOTES IN THE POST ..."
https://www.tapatalk.com/groups/bib...ess-county-new-york-world-clas-t5868-s20.html

Which would have put the post way over the word limit.

The BVDB dumb and dumber.

All four English quotes are in the page.

The sick one, Bill Brown, goes on and on.

"b) implying he put up quotes when he knows he didn't"

And I said there was a url to the full quotes in the ETC post. (And that post cannot be modified after entry.)
Told you that, again and again.

Clearly, you missed the url, so you have been posturing ever since.

And I realize you give me some extra outreach with my posts, so I really don't mind your nonsense.

Sick Bill Brown
"I saw the URL quite clearly. The URL is not a quote."

Then you should have gone to the url instead of being a total fool for days.
The quotes could NOT be in the post, too many words.

Bill, how hard do you try to be dumb?

Matt is so dumb that he does not understand that invisible (hidden) allegory is not partial quotation.

Quotations are abbreviated all the time.
e.g. There are strong evidences for the Mark ending that are just a few words from one verse of the twelve.
However, no silly false theory about allegories are involved.

He's still trying to pretend there's no Elephant in the Room with his invisible quotation theory, because: "Tres sunt qui testimonium perhibent in coelo : Pater, Verbum et Spiritus Sanctus" (which constitutes an actual, contra imaginary, quotation) is literally invisible in all four of the Potamius references. That's the huge Elephant in the Room!
https://www.tapatalk.com/groups/bib...nty-new-york-world-clas-t5868-s30.html#p82069
Last edited: Jun 10, 2021

"is no small misdemeanour"

Barely a blip on the radar, I let the source know, and it is being modified.
And I placed a note thanking the BVDB folks.

And I had already placed the fuller Marco Conti quote here on my Potamius page, 9:08 AM today, the Cyprian note that was in the "...." can be added.
The "..." in the source are fine, btw. It is perfectly proper to omit hackneyed textcrit nonsense and quote the salient parts.
https://purebibleforum.com/index.php?threads/potamius-of-lisbon.1115/page-2#post-7412

Writing about Potamius and Priscillian and Cyprian are all connected.

"Chapman's text, he does not agree with your views"

Of course not, but he offers some excellent commentary that destroys the textcrit scenarios that try to make Priscillian the first real source. And he adds the Cyprian connection to Priscillian! (That is also in the footnote with more detail.)

the case for thinking Priscillian himself the author of the interpolation carries no conviction.1 It is surely older (Cyprian , De Unitate 6, comes close to it ), a modification of the text made in the West at a time when the Monarchian controversy was raging in the third century
Click to expand...

He is partially right, and essentially destroys all the theories of the verse being placed in the text in the 4th century Arian controversies.