More stupidity from matt. He is welcome to play with the dozens of mss. and try to find even ONE full manuscript that does not have the heavenly witnesses within the twelve books at least 3 times, in context.

Or, the three heavenly witnesses that are in both recensions, matt13weekdhacker is welcome to try to find one ms where any one of the references is missing.
https://www.tapatalk.com/groups/bib...ty-new-york-world-clas-t5868-s120.html#p82266

Since he will not find any mss. missing those three sections, it is humorous to laugh at all his posturing.

And I gave some background information ... it was fun to look it up. It is helpful to have more insight, especially on the dating and authorship issues (which, I happily acknowledge, are complex.)

If you can get the Williams book on Ambrose of Milan you should be able to get more manuscript information. Williams is in favor of the main seven books as being a fourth century compilation, authored by Eusebius Vercelli! (Now, that is a real issue.)

Notice that Matt does not even have the integrity to respond. He is an anti-scholar.

Thanks for finding the type, per David.

The top pic is Featherstone, letter of Tischendorf.
The second pic is the book, first edition type. (Bisitz rather than Besitz) 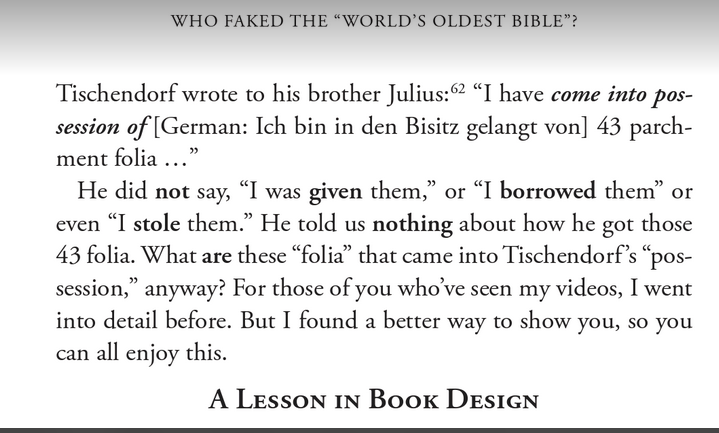 
And I go through this blah-blah in case Bill says anything accurate, such as the typo he caught above.

none of them can read Greek according to Steven Avery.
Click to expand...

Untrue. And I never said such a thing.

(Note: while Avery will get his drawers in a bundle about this, Daniels's education in Greek came from Fuller Seminary. Avery has spent years dismissing seminary learning of Greek as being insufficient, so he can now either modify his all or nothing statement or accept its logical conclusions).
Click to expand...

Bill Brown stupidity. David does not have the native fluency of native Greek scholars (e.g. George Babiniotis), however he reads Greek.

their entire case is built upon the notion that Constantine Tischendorf was an evil and bad lying man who sought to dethrone their favorite English Bible and would have killed his own mother if necessary to gain fame.
Click to expand...

Yawn. Typical Bill Brown lies.
And then more blah-blah till we get to:

..... From there, Daniels weaves through 12 chapters of attempting to salvage the flagging reputation of the documented forger Constantine Simonides, besmirch the reputation of Tischendorf, and use innuendo to suggest all sorts of nefarious things. ... There is literally NOTHING in the presentation that depends on ANYTHING other than the word of Constantine Simonides. ... What follows is a list of SOME of the errors in the book. ... after inflating Uspensky’s reputation beyond one that his own mother would recognize – to disclose that, “oh and by the way, this incredibly smart guy thought Sinaiticus was a fifth century document.” ...

the probability that the author of the biography of Simonides – the actual person behind the name Charles B. Stewart – is Simonides himself. ... , Daniels’s quotation of Charles Stewart’s biography of Simonides. The only pages Daniels ever actually cites or quotes are THE FEW CURRENTLY AVAILABLE ONLINE via Google search.... Stewart’s book (from 1859 remember) tries to assert the authenticity of some of Simonides’s documents by appealing to (wait for it) Tischendorf’s early in 1859 discovery of Sinaiticus. ...
Click to expand...

What an idiot. The SART team has had the Stewart biography for many years. In fact, the whole text is on the net. Plus Stewart is corroborated by letters he sent out on the Simonides issues.

As I have said before, I think Tischendorf took pages out of a bound book in 1844. (skip some more, to look at separately)
Click to expand...

Lots of evidence for this, including the Uspensky report and the simple fact that Tischendorf stole five intact quires (and part of an adjacent sixth). The theft is really a fact, but David was being a bit conservative, partly because you bound book is an inference. The theft is a fact.

For example, he attempts to absolve the fact nobody can establish the presence of Simonides on Athos in the first place. Rather than admitting reality

a) He tells us that citations in an 1895 (or 1900) catalog prove someone was at Athos on a certain date. But that proves almost literally nothing. A catalog compiled fifty years after the fact MAY serve as evidence a particular writing was read on a particular day, but it doesn’t prove the person who wrote it was in Athos on that very day.
b) He doesn’t seem to realize that saying, “Hey, we have these works with the names Simonides and Kallinikos” REDUCE the time frame Simonides could have been working on Sinaiticus, making it even more unlikely he authored it.
Click to expand...

This section is simply Bill Brown ignorance. He simply does not understand the Spyridon Lambrou Catalogue.
Last edited: Jul 19, 2021

Witness of God is Greater
Conclusion: The Manuscript that Cordier used for his 1646 edition (later incorporated by Charles Le Rue in his 1733 edition and finally into Migne’s edition) is unknown.

matt13weedhacker takes issue with this.

(Once again, it seems like the problem of matt is the English language.)

And since I do not see a variation between the Witness text and what you give, it is hard to see what all this posturing is about.
Last edited: Jul 23, 2021

A major MISS in the TWGG on Psuedo-Origen Selecta in Psalmos 122.2 LXX. BTW Steven, you still haven't informed your readers what "in heaven" and "on e

How is it that Avery is not able to see the connection between the Catholic 15th-16th-17th century anti/counter-reformation (i.e. anti-Erasmus stance on the Comma) and Inquisitional intimidation and motivational connection between the three printed versions he prefers by the three (as he would describe) "Text-Crit-Dupes"? ... Why is it that nothing is said in the TWGG about the very real Catholic 15th-16th-17th century anti/counter-reformation (i.e. anti/counter-Erasmus stance on the Comma) and Inquisitional intimidation background context to (at the very least) Cordier's work?
Click to expand...

You may not have noticed that this book goes up to Erasmus and the Reformation era. Both the Reformation believers, e.g. Protestants and Baptists and Anabaptists, and the Catholics, agreed on the heavenly witnesses as scripture. I do write on that era.

Notice that Matt does not even have the integrity to respond.